Last week, House Minority Leader Nancy Pelosi and uber-liberal Congresswoman Barbara Lee held a press conference with fellow open-border and amnesty advocates. They wanted to discuss their proposed legislative deal to grant legal status to the 800,000 DACA recipients who are losing that status following President Trump’s executive order to phase out the program. Suddenly, a small crowd of irate illegal alien youth crowded the stage, stole the show, and demanded complete amnesty for all illegals in the country: not just for themselves, but for their parents, their siblings, for anyone else who has broken into this country. Pelosi lost her cool, then tried to pick up the pieces afterwards, defending their outrageous conduct but displacing their demands for full-blown immigration “Reform”. 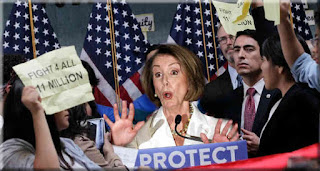 While that press conference has gone viral, one part of the event did not get proper coverage. In addition to the repeated phrases demanding full inclusion of all illegals, one of organizers shouted at Pelosi and the press crowd: “We are not ‘Dreamers’!” They want to be recognized as young and innocent, not at fault for their unlawful presence in the country. They insist that everyone respect their “right” to have a future in the United States, even if they have resided in the country illegally. But do not call them “dreamers”! Why? The label has engendered an ongoing narrative of “good illegals” vs. “bad illegals”, and they want to phase out the moral distinctions entirely, treating all migrants in the country illegally, adverse criminal records notwithstanding, as entitled to full legal status in the United States.

I say we call the illegal alien youths “nightmares” and end this illegal immigration nightmare once and for all. Some of my closest allies in the fight against illegal immigration have called out this false dichotomy before. “There are no good illegal aliens vs. bad ones. Illegal is illegal.” Part of the reason why this immigration debate has fallen into such confused rancor is precisely because of this false division. Let’s not forget, however, who created this mess: The Democratic Party, with Alzheimer’s Nancy at the helm for the greater part of her tenure in Democratic leadership. 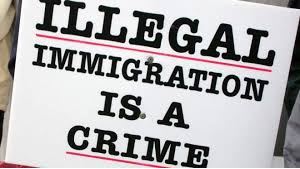 Yes, we all know that illegal alien “nightmares” showed their true colors when they took over Alzheimer’s Nancy’s press conference last week in San Francisco.  Notice that I wrote “nightmares” to describe these young illegals. I think we should stop using the term “dreamers” altogether to describe this cohort of DACA recipients. That politicized abuse of the English language represents the unwarranted friction in the whole immigration debate. Calling a criminal a “dreamer” is patently offensive, just like calling illegal aliens in general “undocumented immigrants” is outrageous political correctness and moral fraud. Human beings are not pieces of paper, but moral agents charged with making decisions and accepting the consequences for their actions. “Nightmares” is a perfect label for these arrogant illegals, and they are living up to that moniker.

They have become arrogant and incorrigible. After 8 years of hasty, lawless promises and reassurances from the Democratic Party, the Nightmares refuse to be placated, and they will raise as much hell as they can--as though they are entitled to dismiss all decorum. They are not just spoiled, self-absorbed Millennials, but they are fear-fueled politicized Marxist-leaning college militants who have been indoctrinated to define their own truth and go off their feelings: a very bad combination.

Beside, we have so many Americans with dreams in this country, young and old. And some American dreamers never got to fulfill their dreams in the first place. At the 2016 RNC Convention, keynote speaker Sabine Durden had dreams of being a grandmother, but her son Dominick was killed by an illegal alien. Angie Morfin dreamed that her son Ruben would grow up and take on the world. He was executed by an illegal alien. Those dreamers mattered, and yet their dreams will never materialize because of the illegal alien nightmare, both their criminal presence and activities in this country. Young dreamer Drew Rosenberg was killed by an illegal alien, and his father Don Rosenberg fights to ensure that American dreamers come first, that their dreams receive full attention.

Fortunately for all of us, these illegals are also sorely mistaken about their chances of success. The vast majority of Americans oppose sanctuary cities and want enforcement of our immigration laws. They sent that message loud and clear on election day.  No matter how much lawmakers on both sides of the aisle try to engage in the Potomac Two-Step, talking a tough game but then caving to amnesty, We the People have seen enough.

Foolishly, they are playing off the same play book that helped Barack Obama get elected in 2008. Political engagement of this kind failed in 2016. All the rallies, protests, screaming and yelling in the public square cannot out-shout the 95 million Americans forced out of work because of regulatory schemes and open border policies. Not being able to pay your bills at the end of the month resonates a lot louder for average voters than the screaming brats who took over Nancy Pelosi’s press conference last week. They have overplayed their hand, and we have had enough. Their protests cannot overcome the grief that American families have suffered watching their loved ones get murdered by illegal aliens.

The more criminal riots and unlawful assemblies they engage in, the more that We the People will stand firm in our conviction that this country is welcoming for those who come legally, and we will not be bullied or guilt-tripped into throwing amnesty to spoiled brats convinced that they have the moral high ground because their college professors told them so. With the American people’s unwavering demand for secure borders, the rancor among left-wing grassroots activists will merely make them look bad, and all but assures that our dreams will come true: the Nightmare kids will be deported, and this nightmare of illegal immigration will finally draw to a close.
Posted by Arthur Christopher Schaper at 9:01 PM