DACA Fix (or Fail) Lies With the House Freedom Caucus

Mark Meadows, the Freedom Caucus Chairman, has become a key figure in the immigration show-down discussion in Washington DC. 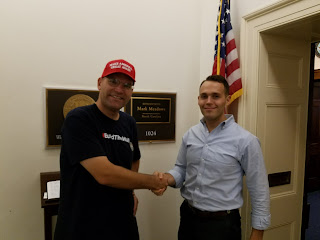 Check out this article from Roll Call, and I will add my comments, including my reflections following my extended meeting with Chad Yelinksi, the legislative staffer for Meadows' office.

House Freedom Caucus Chairman Mark Meadows told reporters Tuesday a Trump administration official asked his caucus to put together a conservative immigration plan that would provide a legislative solution to replace to the Deferred Action for Childhood Arrivals program.

There is no conservative plan that would include any kind of legalization for the DACA brats. The conservative solution is "no amnesty". Period.

“Administration officials don’t want to be caught flat footed with no proposals,” the North Carolina Republican said. “On the debt ceiling there were no conservative solutions. ... And it’s incumbent upon us to put some conservative and compassionate solutions out there to address it. So we’re taking that task as a real challenge. I was asked to do it. That’s what we’re doing.”
Meadows declined to name the administration official.

"Conservative" and "compassionate" are incompatible. We heard about this nonsense during the Bush Administration, and what we got was anti-conservative, Big Business bailouts and Big Government spending. None of this anti-constitutional measures and agendas are compassionate.

By the way, it's not the government's job to be "compassionate." The government has the key responsibility to protect the rights of all, and allow special privileges for NONE!

This insight goes far beyond what Republicans think. DACA was brazenly unconstitutional, and it's a good thing that Attorney General Jeff Sessions stated clearly that the program would be phased out for good.

It's time to put the needs of Americans First. Why is this a problem for people? Why do our elected officials run away from this simple responsibility?!

The Freedom Caucus board has discussed having a few members of the group work on a legislative proposal, Meadows said, noting he expects to formulate a working group this week. The full 36-member caucus has yet to discuss the DACA issue but the working group would undoubtedly seek input from their conservative colleagues.

Whatever imput comes their way, it should be "No amnesty." Done deal.

“We’re looking at trying to find a multifaceted approach to dealing with DACA and other immigration issues,” Meadows said.

There is none. Deport illegals, build the wall, mandate E-Verify, triple the border patrol staff, and punish sanctuary cities.

No illegal aliens. No amnesty. What is the process or the legislative game being played right now? What is going on?

That would include elements such as DACA, border security and e-verify, he said.
Several Freedom Caucus members have said following the Trump administration's DACA announcement they remain opposed to a comprehensive overhaul and still prefer addressing immigration issues in a piecemeal fashion.

Enforcement first and foremost. There is no reason or justification for allowing illegal aliens, young or old, to stay in this country.

Idaho Rep. Raul Labrador, who chairs the House Judiciary Immigration and Border Security Subcommittee, is one of the Freedom Caucus members who prefers to pass immigration legislation in steps, with border and enforcement measures preceding any action on DACA. He has said one big immigration bill could not pass the House.

“The only one big bill that’s going to pass is an amnesty bill and that would be a great way for Republicans to lose all control in Congress," Labrador said last week.

YES! Labrador gets it.

Meadows noted the Freedom Caucus members do not share the same views but the goal of the working group would be to get a consensus among conservatives on how best to address the DACA issue.

How to deal with it? Deport illegal aliens, young or old. It's that simple. That is the consensus which needs to be heard.

One requirement is clear, though. And Meadows reiterated it: “Any way to get conservatives on board with DACA is going to have to have a border security element.”

That will be the one and only element.

The key role of the government is to protect the citizenry--their rights and their persons.

Why is this complicated?

Trump either followed through on a stroke of genius or a stroke of folly by choosing to through the DACA situation into Congress' lap. Will the Freedom Caucus do the right thing and reject amnesty of any kind?

Will they punt this issue? Will they have the courage to announce to the world that they will provide no other pathway than what is already outlined in our federal laws?

The only thing that Congress needs to do about the DACA brats is ... nothing. 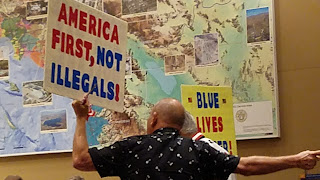 As far as I'm concerned, Congress is pretty good at doing nothing. Let it stay that way.

Let the Chief Executive and his departments follow through on the deportations. We want to see our country and its citizenry put first. There is no reason why anyone should be surprised by this desire. Let us hope that the Freedom Caucus is playing the media game, acting as though they are listening, then they can drop the hammer on the liberal elites and the big special interests once for all.

Here are the current members of the House Freedom Caucus.

Make sure they here from all of you. We need to make it clear to everyone in the House of Representatives: