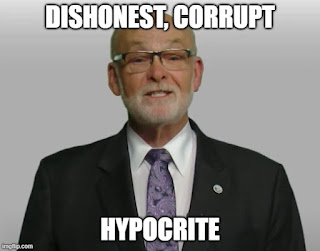 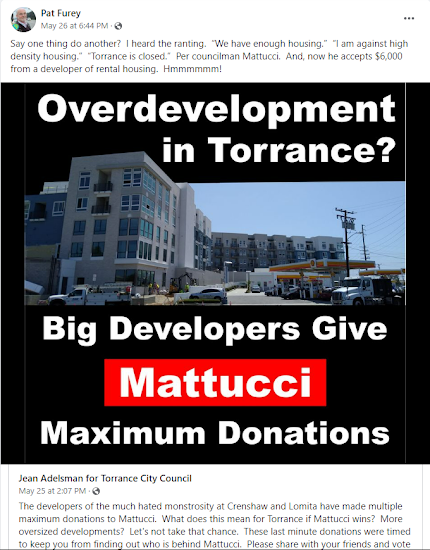 The truth is that Aurelio Mattucci has received a number of donations from small business owners and developers because he wants to make the city of Torrance business friendly. I am surprised that some elected officials find that offensive.

Many people like the fact that Aurelio says what he means, and he does what he says he is going to do.

What is really galling about the attack post above is that the featured development is in LOMITA. It's not in Torrance, and Councilman Mattucci has opposed large developments like the one featured above. In fact, the city of Torrance weighed on this projected development and wanted to stop it, but it was ultimately the city of Lomita's decision.

Pat Furey accuses Councilman Mattucci of "say one thing, do another"? Really?

He also likes to use the word "rant" when describing comments that Mattucci has made in city council or during debates. The truth is that when Pat Furey hears people speaking the truth, he dismisses those comments as "rants." Furey is the same corrupt fraud who routinely shuts people down in city council meetings, only because he cannot handle watchdogs exposing the truth about the city's finances under his watch.

This same Pat Furey colluded in 2014 with a PAC sponsored by McCormick Ambulance, only then to vote to terminate the city's contract with the Torrance-based ambulance company Gerber in favor of McCormick. And Creepy Pat has the audacity to accuse others of "say one thing, do another"?

This is the same Creepy Pat who ushered in a bunch of ordinances on urban farming, only to refuse to enforce them?

Hypocrisy, your name is Pat Furey. 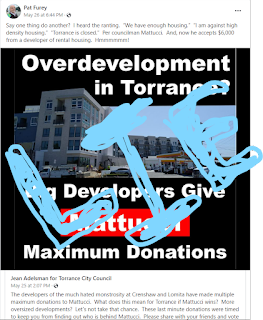 Posted by Arthur Christopher Schaper at 10:06 AM