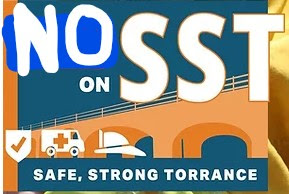 In the last two weeks, I have received five mailers with different endorsements and scare tactics telling me that I MUST, MUST, MUST support Measure SST, which will raise the city sales tax by half a percent.

If I do not support the sales tax hike, every core and essential service will shut down!

If I do not tax myself more on every purchase I make in the city, then the whole city will go bankrupt!

If I do not add to the inflation already crippling household budgets and forcing people to cut back on essentials, then life as we know it will end and the world will self-combust in a ball of fire!

It's really insulting that the city staff and the city council majority forced the residents to even consider a tax hike, when so many of us are hurting because of the high costs of gas, groceries, and other goods and services.

How tone deaf, how out of touch can people be?

So, let's take a look at the five mailers which have flooded mailboxes throughout the city begging every voter to cough up more of their dwindling financial resources to the city:

Here's the first one I received: 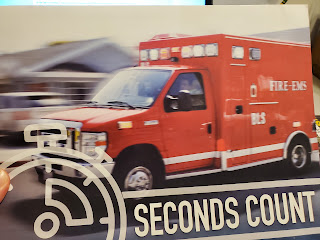 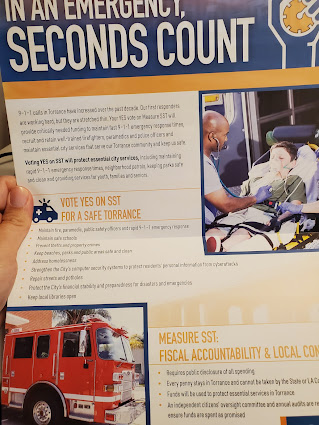 Yes, indeed, every second counts when it comes to emergency care. No one would dispute that. The argument, however, that we must raise the sales tax to ensure that the fire department and the ambulance services remain running is disingenuous at best.

Last month, I had a health emergency and called the fire department. They arrived on scene within two minutes. In fact, there are six fire stations in the city, and they are currently adequately staffed.

Also, there is already a $23 million reserve in the general fund (not $500k, as the Daily Breeze had earlier reported), and that fund is going to increase to $32 million by June, 2022. 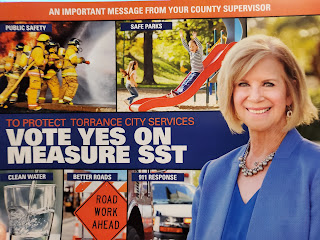 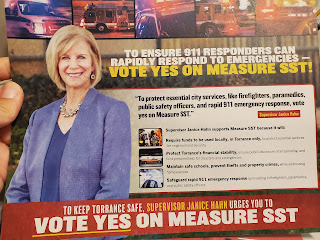 The SST committee is relying on LA County Supervisor Janice Hahn to make the pitch for this stupid sales tax? Really?

Who thought that this was a good idea?

Most people have no idea who their supervisor is, representing them in Downtown LA.

Second of all, so what if some other elected official outside of the city wants a sales tax increase?

This kind of advertisement is a bigger turn-off than a turn-on to support this tax move.

Let's cut through the crap here: Supervisor Hahn simply wanted to put her face on a mailer so that she could promote herself, and she wants to keep in good graces with the public sector unions in the city. She is a union whore, after all, giving the public sector union lobbies everything they want and then some, no matter how much it costs the taxpayers, and no matter whether the citizens get their money's worth for all the spending.

These two flyers were just an insulting waste of time, to put it mildly. Pure political opportunism and sex promotion, nothing more.

Here are two more flyers. The first one tries to appeal to everyone's sense of Torrance as a nice, home-town place where everyone belongs and everyone shares the long-standing history of the city: 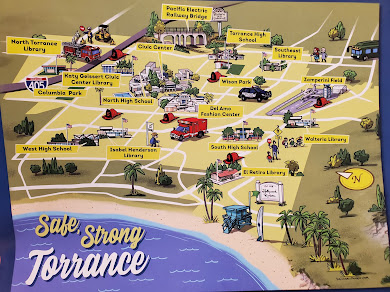 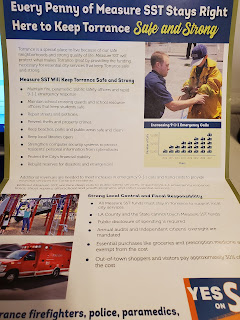 Hey, it's a great map! It's a nice, glossy mailer that gets the reader's attention.

But guess what? I still don't want to pay more in sales tax!

Yes, there is that headline "Every penny stays right here to keep in Torrance."

Actually, such a blunt, obvious headline does not inspire confidence. I guess a focus group or another poll indicated that people are more worried now than before about how the money will actually be spent, and whether it will actually stay in the city of Torrance.

The SST committee is not being completely honest here. There is no certainty that the money will be used for police, fire, or paramedics. There are no specific strings attached to the monies to ensure that they go to essential services. In fact, much of the money will likely go to pensions and benefits for retired workers, which means that the money will NOT stay in the city at all!

But regarding the fact that the money will not be earmarked to specific costs, the city will indeed have the full discretion to spend the new tax revenues on anything they want in the city. That does not inspire confidence to support this measure, even if all the money stays in the city.

When the city council was debating this matter, Councilman Mattucci offered to consider this tax measure if the ballot initiative made it absolutely clear that the monies would only be spent on police or fire. For that kind of initiative to pass, however, would have required a two-thirds vote of the residents.

There is no way that two-thirds of the city would support a tax increase, even if the money would be directly tied to specific essential services in the city only.

In fact, when the city council and staff were investigating how to raise revenue via a sales tax increase, they had initially consider a .075 percent sales tax! After polling on that issue, however, they realized that it would not pass. When they considered a .5 percent sales tax, their polling sample resulted in a bare 52% supporting the tax increase. Of course, all of that was before the price of gas doubled and budget-crippling inflation had set in!

This Stupid Sales Tax Committee has tried so many arguments to make their case. They have threatened residents that core services will suffer if they do not vote to tax themselves more. They have asked Supervisor Hahn to endorse the proposal, and they sent two tacky flyers promoting the self-promoting county politician to everyone in the city.

And now they are trying to assure everyone that the money will stay in the city.

Last of all, they have listed a whole bunch of politicians and city staff, retired and current, who endorse this proposal.

Check out the latest flyer that I received, with a whole bunch of  endorsements! 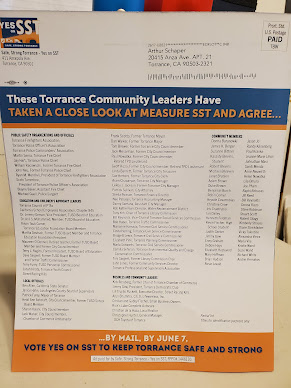 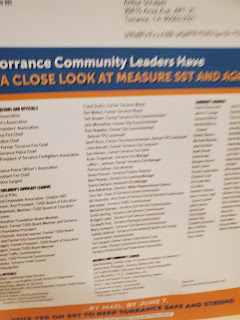 I really have to question this kind of logic.
So what if a bunch of former and current city councilmembers, administrative staff, fire chiefs, police chiefs, etc. endorse a sales tax hike? It's not their money.
It's our money they are asking for more of!
And, the current city councilmembers who endorse this SST measure are the same people who approved spending down the general fund reserves over the last SEVEN YEARS! They were fiscally irresponsible. Why should we pick up the tab on their lack of restraint?
But what really caught my attention with this latest flyer is that they repeat names on the list! Did anyone bother to edit this flyer?
Look at these close-up shots of the listed endorsements: 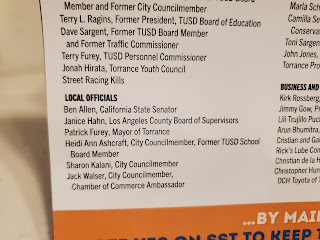 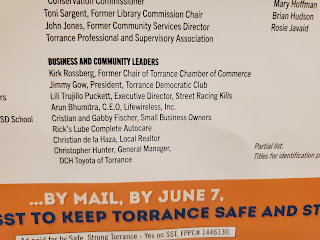 "Street Racing Kills" is listed twice. What does the fight to curb street racing (which is a dangerous practice, to be sure) have to do with raising the sales tax? And why list it twice? Granted, the second list includes the director for the movement, but shouldn't the organization's endorsement alone suffice?

Oh, and the flyer lists Jimmy Gow, the abused President of the Torrance Democratic Club, as an endorser. This is the shameless, self-promotional politics that we got with the two previous flyers propping up Supervisor Hahn. Give me a break!

Oh, and Jimmy Gow is listed twice, too: 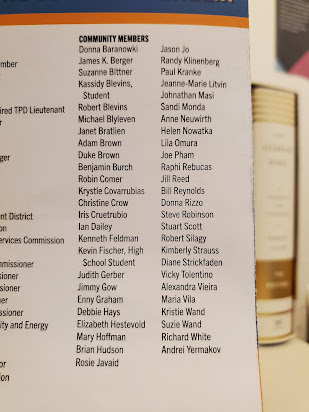 So, because a partisan activist who trespassed on a veterans hall, and went with minions who spit at veterans and stole their property -- he is listed twice on a flyer to endorse a sales tax increase?

What was the SST Committee thinking?!

This is desperation, nothing more.

Torrance voters need to reject this Stupid Sales Tax. One flyer after another indicates clear desperation. Frankly, the committee pushing this measure should be ashamed of themselves, considering all the economic challenges that Torrance residents are facing as it is.

The United States is facing a recession. The S and P Index just touched into Bear Market territory this past week.

The price of gas has skyrocketed, and it's only going higher. The price of groceries is going up by 20%, 30%, 40%. Business is slowing for many small business owners, too.

And with this perfect storm of econmic troubles, the city council and staff want to push a sales tax increase? And this increase is not even necessary, and it will only discourage commerce in the city.

Say NO to the Stupid Sales Tax increase.