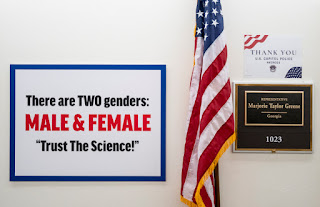 Rep. Greene pushed back, and put up a great sign:

Thought we’d put up ours so she can look at it every time she opens her door 😉🇺🇸 https://t.co/7joKpTh6Dc pic.twitter.com/aBGRSiIF6X

This is the kind of boldness we need to see in Congress.

It's time to stand for truth!

And Rep. Marie Newman should be in a jail cell for abusing her SON and allowing, enabling him to be pretend to be a girl.

Posted by Arthur Christopher Schaper at 3:48 AM