The South China Morning Post reported about the brutal punishment of two men who were caught abusing each other's bodies in the Aceh Province of Indonesia.

The massive Island archipelago nation is the largest Muslim country in the world based on population. The vast majority of cities and regions do not explicitly ban homosexual conduct.

However, the Aceh Province does enforce Sharia law. The government will punish people with public caning if they drink alcohol, if women go out with another man who is not the woman's husband or male relative.

And yes, they punish men who engage in sodomy.

One can certainly wince at the excessive punishment imposed on these two indivduals. Natural law and natural rights must respect the well-being of every individual. 80 lashes is an outrageous consequence for anything.

However, this is an incident in a faraway province in a Southeast Asian country. Why is the Agence-Press France writing about this? Why is the South China Morning Post printing this story?

This is all about pushing a world-wide sympathy narrative for "homosexuals" and for homosexuality, as though the only reason these two indivduals are being so cruelly punished is for ... being who they are.

Notice the sympathy narrative being pushed on the reader throughout the report below: 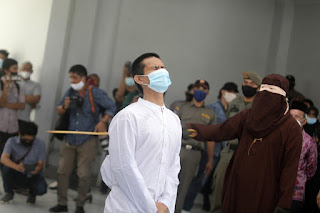 The pair winced in pain and pleaded for the whipping to stop, as a sharia officer beat their backs with a rattan stick

A man accused of having gay sex is publicly flogged in Indonesia’s Aceh province. Photo: AFP

The two men were whipped nearly 80 times each for having gay sex, which is outlawed in Aceh province under local Islamic law.

The pair, who were not identified, winced in pain and pleaded for the whipping to stop, as a masked sharia officer beat their backs with a rattan stick.

The punishment was briefly halted and the men, both in their twenties, were allowed a drink of water before it continued.

“Islamic sharia enforcement is final, no matter who it is, and even visitors must respect local norms,” public order official Heru Triwijanarko said.

The men were arrested in November at a rental home where a landlord found them half-naked in their room.

Gay sex is not illegal elsewhere in Indonesia and Aceh is the only region in the world’s biggest Muslim nation that imposes the sharia law.

In Aceh, on the northern tip of Sumatra island, public flogging is a common punishment for a range of offences that include gambling, drinking alcohol and adultery.

Four others were whipped between 17 and 40 times on the same day over allegations they drank alcohol or met with members of the opposite sex.

Human rights groups slam public caning as cruel, and Indonesia’s President Joko Widodo has called for it to end.

But it has strong support among Aceh’s population.

The region started using religious law after it was granted special autonomy in 2001, an attempt by the central government to quell a long-running separatist insurgency.

Again, what is really going on here? Why is the Western, English-language based media getting all caught up in this story? It's all about pushing a sympathy narrative to normalize homosexuality around the world and to make countries that oppose homosexuality seem barbaric and cruel. Granted, such excessive corporal punishment is a violation of natural law, but it is also wrong for the press to go out of its way to make homosexual pitiable and supportable.

Posted by Arthur Christopher Schaper at 11:19 AM