We the People Rising paid a visit and gave our final respects to five citizens who died in a fire lit by an illegal alien.

This story was desperately depressing.

How much tragedy could be crammed into one story? I did not even learn about it until a close contact informed about his and the deaths of four other people in a fire.

All set by an illegal alien.

ICE officials caught him at the USA-Mexico border in 2012. He was sixteen years old at the time,

Instead of deporting the man, they let him into the country. 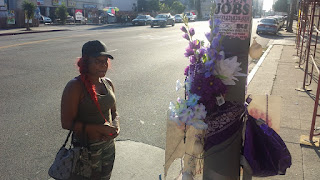 The Honduran native was arrested for domestic violence and drug charges, too ...

And yet ICE did not remove him.

At sixteen, the border patrol and federal policing agents did not consider Sanchez a threat.

So they did nothing.

He has resided in this country illegally for the past four years.

He was staying in an abandoned building on 2411 8th Street.

I took my first video of the burned building on Saturday night.

Here's a video taken that afternoon, giving a clearer view of what everything looked like.

Another homeless drifter, apparently transgendered, beat him up over a room in the building.

In retaliation, Sanchez wanted to set him on fire.

He ended up burning down the entire building. 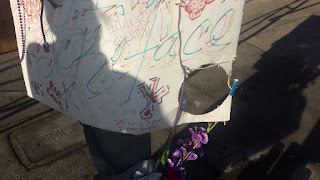 On June 21st, We the People Rising met his widow, Choga Mitchell.

Here is the video where we learned the identity of this victim.

What really bothered Choga? The press did not bother to write his full name.

They should know it, and so should the police. 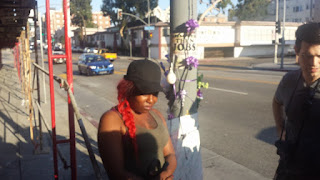 Ace, a friend of Choga's, explained to me that the LAPD didn't turn in Sanchez because he was an informant on crimes going on in the area.

Yet Sanchez was a criminal himself, just by being in the country!

Choga Mitchell will never have her husband back.

What do the leaders of the City of Los Angeles have to say for themselves.

LA is a sanctuary city, which has created a city less safe for the citizens.

Five more people were killed, who did not have to die.

How many more will have to die? One was too much.

It was beyond a coincidence that we were there to meet this widow.

How many more widow, grieving parents, and orphaned children will there have to be before our leaders--local, state, federal--secure our borders and deport illegal aliens?

In the mean time, We the People Rising will make sure that DeAndre "JokerFace" Mitchell is not forgotten.