In Los Angeles, California, one of the largest sanctuary cities in the country, an illegal alien named Johnny Sanchez--a native of Honduras) was living on the street, apparently working as an informant with the local police (who should have turned him over to ICE by then), and was committing crimes himself.

ICE was not doing its job.

They were following him, interviewing him, and then lost track of him.

How could any of this happened? 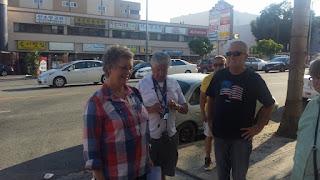 We do not have secure borders. All of these travesties of lawlessness must cease.

Then I read about Sanchez' setting a building on fire, which killed five people.

I had to visit the site of this terrible crime myself.

When We the People Rising  arrived at the scene, the stench of the burned building still lingered there.

A homeless drifter walked by. He claimed that seven people died in the fire, not five.

Then a young lady approached the building. She was crying, in pain, hurting.

Her husband, known to the locals as "Jokerface", died in that fire.

Five homeless died in that fire, according to current reports.

Does anyone care? Is anyone going to do anything about this travesty of injustice?

We the People Rising intended to ensure that the memory of those five people would not be lost.

The young lady told us that her husband's name was DeAndre Mitchell. Residents and neighbors set up a memorial for Mitchell and the other four killed in that terrible fire.

Here are the names of the other victims:

5. A 5th female victim has not been identified (possibly a lady named "Felony".

Illegal immigration is not a victimless crime. 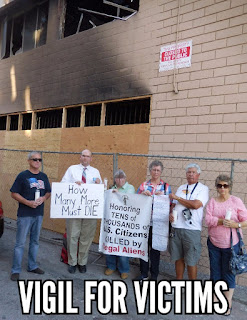 After our vigil, We the People Rising visited the Seven Maples Senior Housing Complex on 7th street.

Our intentions. To meet with the members of the MacArthur Park Neighborhood Council, and demand accountability from the representatives in this region.

No citizen should fear for his safety in Los Angeles, or anywhere.

When we arrived at the complex, we found an empty and locked community room.

How many more have to die before our country takes secure borders seriously?

How many crimes, how much more lawlessness will residents in California and throughout the country put up with until we have proper leadership that will stop illegal immigration and enforce the law?