LA County for Trump refuses to sit back and allow illegal aliens and their enablers dominate the public square in our city and county.

Why do we have to hear about illegal aliens and their plight? 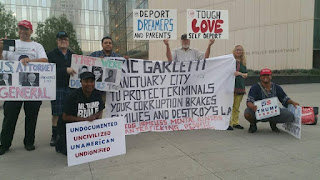 It's not our fault that the illegal alien parents brought their kids into this country. The children have received incredible blessings and benefits in the United States. They need to take those skills to their home countries and make those nations great again.

The USA cannot serve as the Battered Women's Shelter of the world. Never should any country serve as the Social Worker for Everyone Else, either.

We have our own citizens in great need. We have our economy, our public policy, our own challenges which need to be addressed. No veteran should ever starve homeless on LA streets.

No American citizen should have to struggle to find a job just because he cannot speak Spanish, Chinese, or Korean. 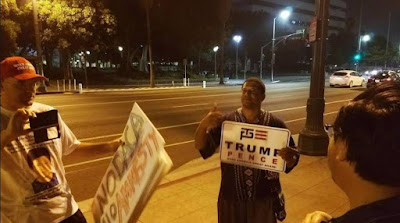 The promotion of illegal aliens at the expense of American citizens, of California taxpayers must cease.

This is corruption. This is a domestic form of apartheid, and we are not going to have it!

Check out LA County for Trump taking the fight to Downtown LA, outshouting the illegal alien enablers and demanding justice for Americans, especially those killed by illegal aliens!

Posted by Arthur Christopher Schaper at 10:37 AM