The engine was stalling on me, the thermostat was going off the charts. The gasket was blown, and the transmission was finally on its last leg.

The cost to repair the vehicle, at least $5000, was too great to put into a car which had already been through so much.

I had to face the facts: it was time to let my Buick Century go.

Goodbye Buick Century. This car was literally a gift from God. I was really in a tight pinch. I needed to get a car. I got my first job. But I needed a good ride. 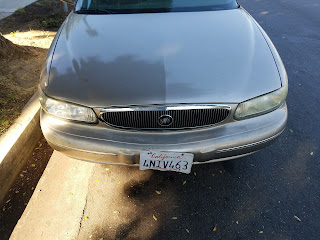 I purchased the car in 2006. I had just turned my teaching credential and I got my first apartment. And this was my first car . I must say I pride myself on having paid paid it off before the five-year deadline. Buick Century has seen me through just about everything. As soon as I sat in it I knew it was the car for me. It had really low mileage on it I paid less than 10 grand total for it.


The year 2006 was a rough time for me. So many changes, so many transitions in so little time. I had just received my credential in February. Then I was starting to substitute teach.

I then got hired at South East High School in April--barely two months after the credential. I had to get a car and then an apartment so that I could take off into the world. The car part was difficult. I had to deal with my mother, who was full of her usual fears. I had run into so many challenges.

When she was finally out of the picture, I walked down Pacific Coast Highway in Lomita, and I ended up at A+ Auto. The car dealership is no longer there, but at that time, I found that Buick Century. Year 2000, it had only 39,000 miles on it!

This car had seen me through everything, and it was roomy to boot.

I drove it to San Bernardino, San Francisco, as well as all over the South Bay. What a treasure it was for me. I even paid it off ahead of schedule.

So sorry that I have to let it go. But I know a new car a better car is waiting for me.


If there's anything you can contribute to help , please feel free to donate to my PayPal account Arthurschaper@hotmail.com