A small, very small group of anti-Trump haters showed up outside of the Anaheim Marriott to protest the special guest appearance of Steve Bannon. 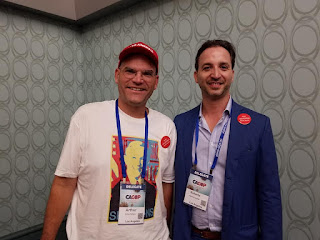 I have never seen a more pathetic gathering of anti-Trump left-wing hatemongers.

Here is my entire video of the event:

One of the left-wingers took a brief video of me, too!

And so much winning!

Even the Los Angeles Times could not hold back from mocking their tiny turnout: