I received this email from a writer/reporter named Lienhard (midsommer_mews@yahoo.com).

This is a shocking write-up regarding what happened in Brea during a DACA rally,
in which the driver was caught in the middle of an intersection and then taken into custody
for attempted battery ... just trying to get out of the intersection while surrounded by
vile, violent SEIU thugs!

On Friday, SEIU completed Day 2 of a Pro-Illegal Immigrant/DACA demonstration in front of Ed Royce's office in Downtown Brea. Every major news station was present, cameras aligned and focused on a Spanish speaking female at the miked speaker's platform directly in front of Royce's office. 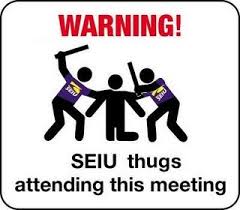 The Brea Buzz page filled in some blanks as to why there was such a big response. Thursday panicked citizens were wondering why the Brea/Birch intersection was blocked and flooded with police. In response to the confusion, one of the Admins of the Buzz page finally posted an article by the OC Register, which discussed the incident: Unite Here Local 11 bused members into Brea from Mac Arthur Park in Los Angeles, and a man waiting at an intersection was arrested for driving into the crowd of protestors.
Friday the same Admin posted a generalized statement by the Brea PD, but he has blocked people from commenting on the incidence, thereby censoring reality and the opportunity for citizens to have a "teachable moment" with their children on "Why American unions would fight so hard to have illegal aliens take the jobs of American workers." Since he is a parent who ran for School Board on transparency, fairness, and civility, you'd think he wouldn't let a moment like this go to waste.

The video from the Unite Here Local 11 Facebook site shows protestors blocking the intersection in several directions. They claim an "irate driver purposely chose to ram the protestors." The suggestion being that he was acting against their cause. The video shows that the protestors were crossing on a red light, and swarmed in front of the guy in the lead car on purpose, in response to the many, many cars which were honking at being blocked. None of the police interfered with the protestors or barred them from overtaking the intersection.

This is a busy, heavily traveled intersection in town. Most importantly, this is Orange County where people are not used to the violence of Third World, Latin American, gang banger types...people with sticks defiantly blocking any means of egress while fomenting fear and hostility. Those folks who have not lived in L.A. County do not understand this huge cultural difference, until it traps them in their car as they're just trying to get some Starbucks or make it back to work on time.

Since the police refused to control the situation, it appears the panicked driver (whose car bears handicapped license plates) tried to inch forward as protestors beat on his car and jumped on the hood. When the police finally did go into the fray it was to stop the driver mid-intersection. The police then found themselves surrounded by people closing in on them, intent on getting to the driver. As the cops yelled at people to get back in one direction, another group of protestors chose to try to get to the driver behind the cops' backs. A frightening lack of respect for authority.

Brea PD was definitely not ready to act in real time to anarchy or larger numbers of people (think Reginald Denny).

In contrast, Friday's police presence actually controlled the intersection, the area/street in front of Royce's office, and the flow of people, except that their presence lent a creepy and dangerous feeling to an entertainment and shopping area of the city.

It also shows the extremes it takes to get a fully functional police department, and the power of the unions and the Pro-DACA movement, which were able to get priceless, coordinated media coverage to further their movement.

BTW, I'm going to see Milo at CSUF next Tuesday. It will be interesting to see how the more liberal city next door handles a really big event with a high probability of Antifa players. Game on.
Posted by Arthur Christopher Schaper at 3:22 PM