There is a grassroots wildfire purging out the big government, big business establishment in statehouses all over the country.

In California, grassroots leaders and activists slammed Cheating Chad Mayes for betraying taxpayers, Republicans, and his own wife with the Cap and Trade betrayal.

Two RINO US Senators, who had lied to their constituents to get elected only to bend their knees to the DC Swamp, have announced their decision to leave Washington DC. They don't want to work with Donald Trump, because they can't accept that Big Money cannot quell the populist outrage of voters across the country. 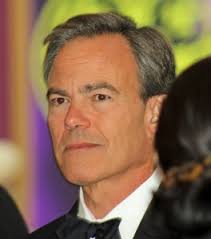 Now, another major GOP leader is seeing the handwriting on the wall, and has announced his decision to step down from office.

Joe Straus, the Speaker of the Texas State House, has gone out of his way to kill every major conservative reform. He refused to protect the privacy of Texans, especially women and children, because of his decision to kill the "bathroom bill".

He also supports the DREAM Act perversion for illegal alien youth, although he had to buckle and allow for passage of SB 4, the sanctuary city ban.

Here's the full report on Strauss' timely exit from the Austin statehouse:


AUSTIN (KXAN) — In a major shift in the Texas Legislature, longtime Texas House Speaker Joe Straus announced Wednesday morning he is not seeking reelection.
Straus, R-San Antonio, ran for the Texas House in 2005 and has been serving as the House speaker since January 2009.
In a letter to his constituents, Straus says, “In every legislative session, I’ve tried to bring real solutions to real challenges.” He notes that even as “politics has become more tribal and divisive,” he has always been focused on working across party lines and focusing on items that Texans care about such as education and mental health.
Straus says his time as a state representative and a speaker will end at the conclusion of his current term.
I wish that he had taken off sooner. This guy was a real thorn in the side for all Texas.
He was Mr. Big Business, doing the bidding of corporate cronies rather than meeting the needs of the basic constituencies across the state. Perhaps this move indicates further what I have contended at length for a long time. Texas is not getting bluer, but rather REDDER because of in-state migration. 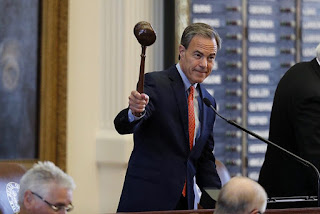 Throughout this year’s legislative session, Straus was targeted by conservative groups over polarizing issues such as the so-called “bathroom bill.” The most vocal critic has been Lt. Gov. Dan Patrick. He expressed his anger at Straus over the summer when both chambers couldn’t agree on a property tax rollback bill and gaveled out of the special session.
Property taxes are pretty high in Texas, just like in New Jersey--well, maybe not as bad as the Garden State, but they are comparable. One friend of mine moved out of Torrance, CA, where he was paying one set property tax, kept low because of Proposition 13. He purchased another home for half the sales value compared to his current Torrance home, but will end up paying the same property taxes.
The property tax burden in Texas is too high. This contentious point has received extensive coverage from government watchdog and consumer advocacy groups.
“You have a speaker that says ‘I will kill privacy, no matter what the people of Texas want’ and the people of Texas don’t want their children showering together in 10th grade,” said Patrick.
While Straus is stepping down from public office, he says he’ll now “have a greater opportunity to express my own views and priorities.”
In other words, he will fall in lock-step with the Democratic Party agenda of expanding the size and scope of the state, while lining the pockets of special interests, for whom he will be lobbying very hard in the state capital. 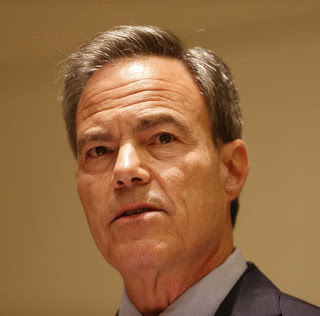 Response from Other Politicians

Rep. Chris Turner, chair of the Texas House Democratic Caucus, only had good things to say about Straus’ leadership.


“His deliberative approach to public policy will be truly missed, as will the inclusive manner in which he ran the House,” Turner issued in a statement. “Under Speaker Straus, the House led the way on a number of bipartisan accomplishments, including public school accountability reform, water infrastructure and mental health access.”
When the Democratic Party caucus leaders praises a Republican, you know that that politician is just another RINO.
So glad that the state house will be able to say to Speaker Straus "Adios!"
Posted by Arthur Christopher Schaper at 1:36 PM