I knew that it would only be a matter of time.

Then Jeff the Flake announced that he "could not serve" any longer in the US Senate with the President as he is now in office.

Please! Flake the Flake knew that he would get his head handed to him in a primary fight against Kelli Ward. Furthermore, President Trump openly denounced the junior US Senator a number of times, both on social media and in a well-attended rally in Phoenix, Arizona.

This "conscientious conservative" got the message. He was really not a conservative, since he sold out to the globalist, corporate interests to further his power differential in the US Senate. The same holds for John McCain, a bitter old coot with more interest in sabotaging Trump than respecting the will of the Constitution and the wellspring of the voters who elected him.

The Never-Trump or "Don't Like Trump" caucus is fading fast in Washington DC.

Now another not-so-Trumper is announcing his retirement: 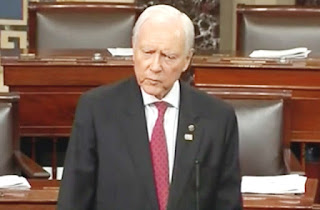 To be honest, his decline as a conservative spokesman into an Establishment shill is remarkable and sad all in one throw.

He had toppled a Democratic incumbent in 1976, in spite of the negative aftershocks of Watergate, which had cast a dark cloud over the Republican brand for some time.

He fought for a robust opposition to the Soviet Union. He was a strong pro-family conservative. Despite the media press against an impeachment then trial of President Bill Clinton, Hatch pursued the charges and defended his party's decision to remove Clinton from office for lying under oath to a federal grand jury as well as obstruction of justice.

He voted for the bank bailouts. He went along with George W. Bush's Big Government expansionism and international interventionism.

Then he sounded off on allowoing transgenders to serve in the military. What?

Now he wants to grant amnesty to all the DACA illegals.

He has been in Washington DC too long. 40 years and he has become more distant rather than more in touch with the concerns of Utahns and American citizens.

The amnesty push is the last straw. Hatch needs to go--and reports indicate that he is going! In fact, his wife and family would like him to step down. He's listening to their voices, and that's in the best interest of his state and the country.

There is one dark lining to this silver cloud. Another GOPe-vs. Trumplican fight will break out in the 2018 primary: Mitt Romney wants to run.

This guy is a total carpet-bagger. He was born in Michigan, then ended up in Massachusetts, where he ran for US Senate in 1994, only to lose by double-digits to Ted "Chappaquiddick" Kennedy. He served one term as governor, in which he passed the statewide prototype for Obamacare, signed off on LGBT bigotry legislation, and the like.

He is the last guy anyone of us would like to see serving in the US Senate or anywhere else in the federal government. Besides, his hateful, elitist remarks against President Trump revealed what an arrogant Establishment shill he really was, a sell-out more interested in being like by the media and fetted by the country club gentry--with neither interest nor investment in working and Middle-income Americans.