The Deep State Strikes Back? Dahle's Chief of Staff Another Government CONSULTANT!

We have another well-connected chief of staff in the Assembly minority leader's office.


His name is Joshua Cook.

So, once again we have proof that the new boss in the California Republican Caucus is not much better than the old boss.  The one difference is that Dahle has not betrayed his caucus, his party, or the state ... yet.

I have shared, however, what a negative experience I had confronting him about two weeks ago at the Republican Party Convention.

Here's my brief confrontation with him at the Marriott Hotel restaurant.


So, what do we know about this Joshua Cook fellow? 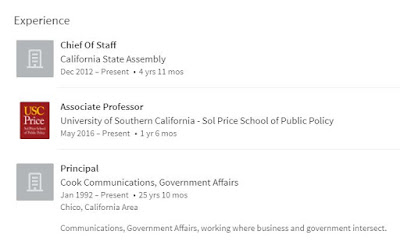 He runs a consulting firm, just like RINO Cap and Traitor Joe Justin! 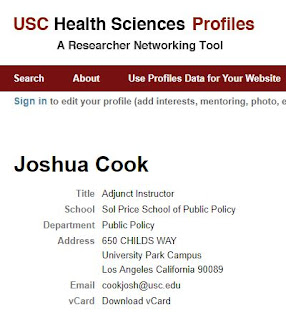 He makes big money and is an adjunct professor for USC.

He's a chief of staff with his own consulting firm.

Here's more information about his wife, who also serves as a consultant:

Appointed by Governor Pete Wilson in 1993, the California State Senate confirmed Cook by a vote of 38-0 as a member of the California Student Aid Commission.  The Commission serves as the principal state agency responsible for administering financial aid programs for students attending public and private universities, colleges, and vocational schools in California.

So, Husband Joshua removes conflict of interest because he is no longer the President?

I don't think so. Look how Robinette had a government job way back in the day. I wonder how many contacts--and contracts--she was able to scoop up for her communications firm through her work as a governing board member.

And information about Joshua:


Josh Cook is a seasoned government affairs and communications consultant with over 20 years of experience solving complex political problems in California and Nevada.

Are we anywhere closer to draining the swamp in Sacramento when we have another well-connected consultant type working in Sacramento?

Or can we expect that we will finally get some coordination and leadership that will reflect the needs, the interests of the overburdened California voters and taxpayers.