RINO statewide Chairman of the group had distorted by-laws to expel women who voiced outrage.

Another example of the GOP establishment’s embrace of LGBT radicalism – and the need to fight back. 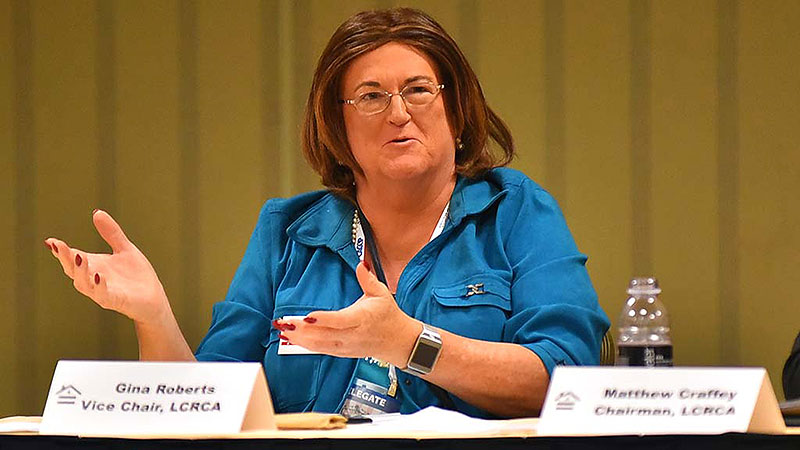 Gina Roberts is a busy man. Besides being the "female" president of a GOP women's group, he was vice-president of the state-wide homosexual group Log Cabin Republicans of California.

One of the biggest divides between conservative Republicans and the establishment RINOs (who run the Party) is over the radical LGBT agenda.

The situation has worsened recently. As we’ve reported (here, here, and here), for years the LGBT movement has dominated CPAC (the so-called Conservative Political Action Conference), where Republican leaders annually go to pontificate. Last year, the Republican National Committee and President Trump formally announced their “Pride Coalition” to fully integrate the LGBT movement into the Republican Party. In November, twenty-one Republican Congressmen co-sponsored the so-called “Fairness Act” which would have embedded the radical LGBT demands in federal law. It’s not just the national GOP. Last year, every Republican State Representative in Massachusetts but one signed a statement that religious beliefs against homosexual behavior are “inappropriate and disturbing” and have no place in the Republican Party.

But at a certain point the rank and file need to step up and draw the line.

In November 2020, a MassResistance activist in southern California contacted Arthur Schaper, our Organization Director (who lives in the area). She was very upset because the Escondido chapter of the California Federation of Republican Women had just elected a cross-dressing “transgender” man as its next president. She could not believe this was happening! She begged MassResistance to get involved and help overturn this.

Gina Roberts was sworn in as president of the CFRW Escondido chapter by "conservative" Congressman Darrell Issa, as the other RINOS in the group looked on.

The California Federation of Republican Women (CFRW) was founded in 1925 to give women a voice in politics and governance at the local, state, and national levels. Women tended to vote Republican after receiving the franchise in 1920 (and in some states, before the 19th Amendment had passed). This was because it was Republicans who had pressed for them to get the vote. The National Federation of Republican Women formed in 1938. So the institution has a long history. California’s chapter is still one of the largest in the country, having numerous local units throughout the state.

According to the organization’s by-laws, men can only join as associate members. They cannot vote and they cannot become officers of the club.

The man who was elected to be the Escondido chapter president calls himself “Gina” Roberts. He had already been making a name for “herself” by pushing the transgender agenda into the California Republican Party as a “Log Cabin Republican” member, and by getting elected to various local town boards. He received glowing press from the leftist media.

The leftist media ate it up!

Not surprisingly, a few months after his election, the national CPAC convention (in March 2021)  welcomed Roberts (along with well-known “gay” Republican Ric Grenell) with open arms. 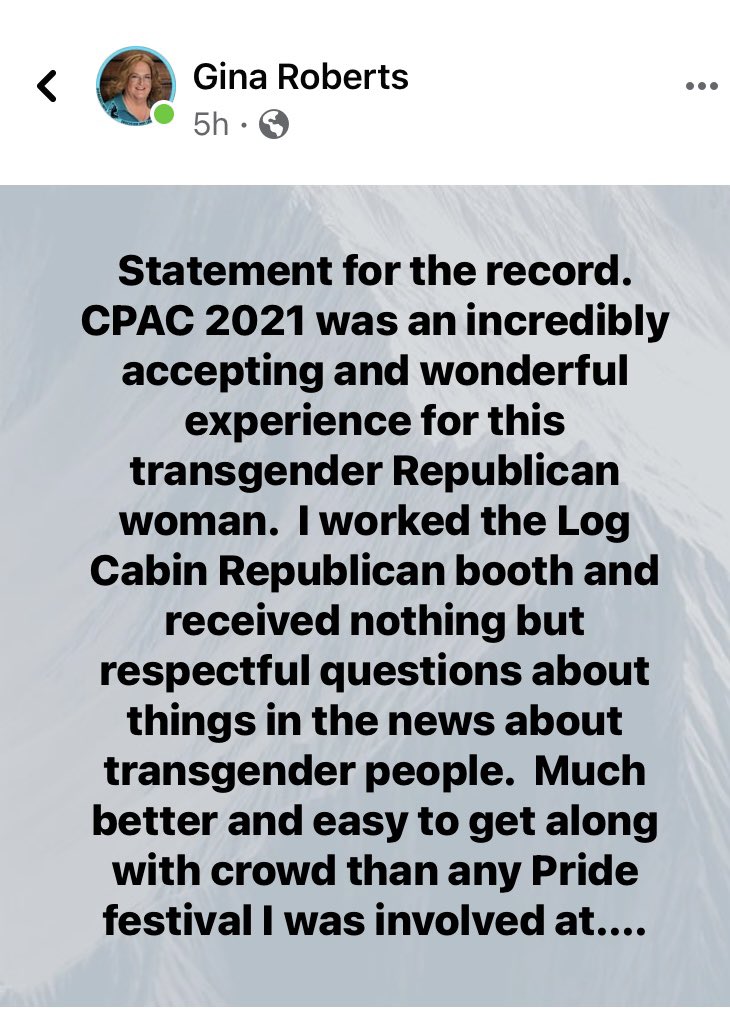 MassResistance gets to work!

Arthur began contacting other CFRW units throughout the state. Many of these women are dedicated MassResistance supporters and activists in pro-family battles across California.

Members of the South Bay CFRW group in San Diego filed official letters with their state leadership. Other members informed their club leaders that they would leave the organization if the state and national leaders did not rectify this situation.

Arthur contacted the leaders of the Escondido group to find out why they would allow this. Shockingly, previous club leaders and officers at the time engaged in non-stop gaslighting: “She is a woman. We did elect a woman to be our President,” they told Arthur. Their denial of reality was truly disturbing.

The leadership in some local units, as well as in the state organization, sounded off with the usual excuses: “We have our orders. We cannot do anything about it. We will get sued if we try to prevent him from becoming a member as a woman,” they said.

The CFRW state leadership was particularly adamant that Gina Roberts should continue to lead Escondido group.

It's not just the CFRW leadership. This is supported by the state GOP. Here is Gina with California State GOP Chairman Jessica Patterson. (Apparently, Patterson has succumbed to the "transgender mass formation psychosis" that's going around.)

But across the country: More outrage!

Arthur reached out to Federation of Republican Women chapters across the country as well, urging them to pressure the National Federation leaders to do something to stop this. The Montana and Idaho chapters, and to some extent Virginia's, were supportive. The Texas chapter was the best. One Texas RFW group reacted to MassResistance’s call by changing their by-laws to include only “biological” women! The national office, however, was not interested in getting involved.

As word got out, more and more Republican women became angry. As an American Thinker article noted:

Immediately, MassResistance activists in the club, as well as surrounding CFRW clubs, started sharing and protesting how the organization’s leadership had rejected its own bylaws. They and others wondered why they should elect Republicans with an eye to smaller government, lower taxes, strong military, right-to-life, pro-Second Amendment, adherence to the U.S. Constitution, and all the other GOP talking points if the Republicans are going to vote and act like Democrats?

A MassResistance activist in Orange County who was a local CFRW member was furious. She began an email campaign, writing to other CFRW members across the state. She sounded the alarm that men were taking over women’s Republican positions. And she castigated the “woke agenda” taking over the California Republican Party.

In October 2021, during the statewide CFRW convention, the Orange County MassResistance activist and several others spoke out and even attempted to introduce an emergency amendment. But the leadership took extraordinary steps to silence them. As American Thinker reported:

Some members at the organization’s October 2021 convention in Rancho Mirage pushed back against the CFRW executive board’s unilateral decision that “woman” should be based on identity rather than biology. To that end, they attempted to bring an emergency bylaw amendment to the floor.

Yet each time someone came to the microphone, leadership cut off the mic and angrily told the member that she was out of order. Finally, one woman walked away from the turned-off microphone and yelled into the cavernous conference room about what was happening.

Some members were learning about this issue for the first time. Others had known but thought they were the only ones who felt it was wrong. A few had complained to the executive board and were called transphobic.

Several were annoyed that “conservative” Congressman Darrell Issa went along with the woke parade. “Republicans like Issa are exactly what is wrong with the Republican Party,” claimed one frustrated member adding, “Why should I volunteer my time to elect woke Republicans?”

In retaliation for this MassResistance activist’s efforts to expose the flagrant violation of the organization’s by-laws, Janet Price, the state CWFR president, wrote a letter to the woman’s local chapter, stating that she could no longer be a member of the CWFR local club or of the federated groups as a whole!

Price concocted a series of Orwellian arguments, asserting violations of various bylaws: (1) not “cooperating with the California Republican Party”; (2) “working against the goals of CFRW” and the national group; and (3) violating an ethical ban not to “speak disparagingly in public of any Republican or candidate.” (This absurd ban would keep a member running in a GOP primary from speaking critically of her opponent.)

A few weeks later, her chapter formally kicked her out, and sent her a check refunding her dues.

Of course, this only inflamed the situation even more. She continued to write extensively about this, and more CFRW members became angry at their RINO leadership.

These efforts, along with the ongoing reports and complaints from other chapters around the state, clearly made an impact. On February 7, 2022, Gina Roberts finally resigned from the Escondido CFRW chapter. The official reason given for his resignation (as told to us by one of the Escondido officers) was an employment commitment.

Republican activists across California are grateful to MassResistance for taking on this battle.

Many Republican women were extremely upset when they heard about this ridiculous, unnatural, and lunatic situation. But they felt alone and feared retribution by the often vicious RINO establishment. (It’s a common tactic among totalitarians of all stripes. The “cancel culture” also in exists in the leftist GOP.)

MassResistance made it safe for them to speak their minds – and demand a stop to this outrageous and degrading situation. This may seem to have been a small battle in the larger scheme of things, but it represents something much bigger!

Posted by Arthur Christopher Schaper at 11:35 AM