Truths to Counter the AA Cult #1: It Doesn't Work!

Today, I am so grateful to Daddy God for all the good that He has done for me through His Son Jesus Christ.

The more that I learn about Him and the New Covenant--Christ and Him Crucified--the more angry I become when I realize that for a large part of my life, I was in bondage to a cult because I was lied to for years and years that this "cult" was a normal expression of Christian faith.

This cult is called Alcoholics Anonymous. 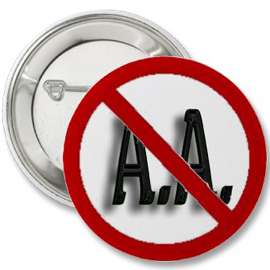 To make a long story short, my mother was a "Stepper Mom," totally knee-deep (or rather head-deep) I will be sharing the Twelve Things You Need to Know about the AA Cult via this blog site.

All of this information comes from the "Orange Papers," and that website and creator deserve all the credit.

I am merely a grateful, blessed, saved, redeemed messenger calling out one of the most pernicious, yet subtle, false gods in our society today.

The Twelve Steps do not work as a program of recovery from drug or alcohol problems.