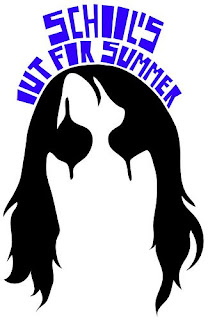 "Well we got no choice

Governor Gavin Newsom issued some somber--perhaps to some people--that California schools would probably remained closed for the remainder of the school year, not open up until after summer vacation. 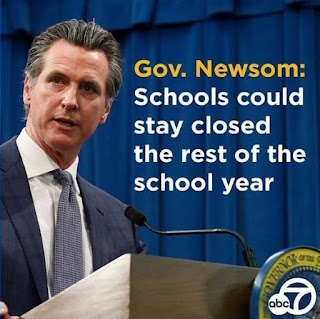 
Coronavirus: Newsom warns most schools could be closed until summer aslockdown expands
“Don’t anticipate schools are going to open up in a week,” governor says

Most of California’s schools could remain shuttered for the rest of the school year as the coronavirus pandemic continues to spread across the state, Gov. Gavin Newsom warned Tuesday.

More than 98 percent of California’s student body — about 6.1 million students — have had their classes cancelled so far, Newsom said. While many school districts have only announced closures for a few weeks, Newsom said it was unlikely that most would open again before their summer breaks in May or June.

Man, I wish I had been this lucky when I was growing up! Seriously!

“Don’t anticipate schools are going to open up in a week,” he said in a press conference at the state’s emergency headquarters. “It’s unlikely that many of these schools — few if any — will open before the summer break.”

“Boy, I hope I’m wrong, but I believe that to be the case,” based on experts’ assessments of the level of social distancing required to beat back the growing epidemic, Newsom added.

I hope he's not wrong, for once.

Our kids would be in much better hands staying at home with a parent or another loved one, as opposed to sitting in any of the toxic government schools indoctrinating children to hate this country, hate our nation's values, and even to hate themselves.

Due to the shutdowns, California has requested a federal waiver that would allow the state government to not require standardized testing this year. Students “already have enough anxiety” as it is, Newsom said.

More winning! These standardized tests are not preparing students for the real world as enterpreneurs and active citizens who can make the difference in their lives, and in the lives of their families and communities. In fact, much of the illiberal indoctrination which has become so rampant in California's government schools is only programming students to become Democratic talking-point hactivists who expect the government to answer all of their problems.

I am glad that school's going to be out for the summer! Frankly, I think that government schooling should be out forever, just like Alice Cooper said!

In fact, I kind of look forward to what he ranted about forty years ago!

No more pencils no more books
No more teacher's dirty looks yeah
Well we got no class
And we got no principals
And we got no innocence
I would say that Alice Cooper is wrong in only one sense.

Because kids are not going back to school this year, they will actually be able to retain their innonence for a few more years.

They won't be learning about homosexuality, transgenderism, easy sex, abortions, the accumulation of STDs.

They won't be compelled to share bathrooms with students of the opposite sex.

They won't be imbibing all the illiberal, anti-American hate which teaches them to be cynical about anything and all things good and proper in the world.

They won't have to fear predatory school staff, administrators, or teachers, either. Whether the press wants to talk about it or not, there is an unprecedented degree of sexual abuse rampant in government-run public schools.

And they kids won't have to submit to the corrupt, perverted teachers' unions poisoning them with their political propaganda, either.

WOW! School's Out for the Summer! Let's Party! 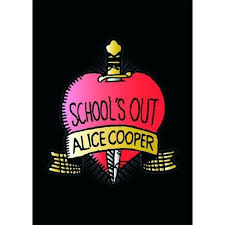 Posted by Arthur Christopher Schaper at 8:34 AM