Chronological Snobbery: Media Reaction to Victory for Section 377a in Singapore

The courts in the Republic of Singapore have upheld Section 377a, the statutes which criminalize homosexual offenses. 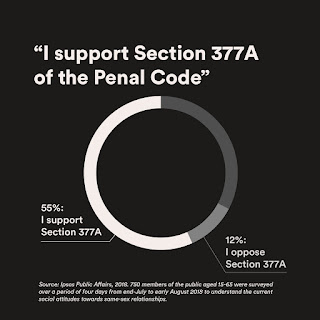 To say that the mainstream (read, liberal and pro-LGBT) media is not taking this news well would be an understatement.

Certainly, the pro-gay news sites in the world are foaming at the mouth.


Singapore doubles down on homophobia, says millions of menare breaking the law by having gay sex

Here's what they had to write:

The Singapore High Court has dismissed three separate challenges to a law that criminalises sex acts between men.

Gay and bisexual men in Singapore will continue to live as “un-apprehended criminals” under Section 377A, an outdated law colonial-era law.

Section 377A defines sex between consenting men as “acts of gross indecency” punishable by up to two years in prison. This also extends to anyone who abets, procures or attempts to procure such acts, but does not apply to lesbians.

Last year three separate challenges against Section 377A were launched by three Singaporean activists, including an organiser of the Pink Dot rally.

Prior to this there had been two unsuccessful attempts to repeal the law in recent years, but the trio petitioned the High Court to revisit its earlier decision in light of new evidence.

Speaking to The Gay UK, Téa Braun of the Human Dignity Trust said: “This decision will be extremely disappointing for the plaintiffs and the wider LGBT+ community in Singapore, who had great hopes that new evidence presented to the court would make it clear that these draconian laws cannot withstand proper constitutional scrutiny.

"Draconian"? Really? The law is not actively enforced!

“The ruling will also echo harmfully around Asia, where millions of people are criminalised simply because of their sexual orientation or gender identity.”

LGBT+ rights remain a thorny issue in the socially-conservative city-state, but Singaporean activists are determined to see change.

I would like to return to the headline for this article: "Doubles down on homophobia."

Opposing homosexuality is not a mental disorder, but a sign of mental clarity and intellectual accuity. It is wisdom of a higher order to recognize that homosexual conduct should not be allowed to run rampant in any country. These behaviors should not be celebrated or permitted. Indeed, the state has a right and necessity to restrain evil, and that means denouncing and delegitimizing homosexual acts.

It's not a "phobia" by any stretch of the imagination.

Forbes Magazine has now shacked up with the LGBT lobby?

The reporter refers to Section 377a as "colonial". i.e. backward, not progressive.

The pro-LGBT elements in the corporate world have jumped on the same perverse bandwagon, going to every length to celebrate sexual perversion and deviance. Homosexuals and their promoters around the world actually have a considerable amount of money. Most of them are wealthy investors and benefactors, and looking through historical records, one finds that homosexuality was a particular perversion of the elite, not the working or merchant classes--those groups were too busy earning a living and living their lives.

The second part of this title is outrageous, as well: "Being gay remains illegal."

Again, there is no such thing as "being gay". There is no gay identity, because there are not gay genetics. People are not "born that way". This massive fraud must be debunked thoroughly and unequivocally. When pro-business magazines and news sites traffic in this trash, they need to be held accountable.

How about the Financial Times? Surely they would write something more fair and balanced?

This is the Financial Times, and even they have fallen for many of the lies of the LGBT lobby.

First of all, there is no such thing as "gay sex" (unless one is talking about the bless of marriage between man and woman). Two men cannot have sex. They can abuse each other's bodies, and they can sodomize each other, but they cannot have sex.

Now, let's look at the first paragraph of the report:

Singapore’s high court has upheld a colonial-era law that criminalises sex between men, putting the international financial centre at odds with the liberal trend to embrace same-sex relationships.

Once again, the writer mentions "Colonial," i.e. backward, wrong-headed, stuck in the past, etc.

Notice also that the writer appeals to this fallacy that there is this Zeitgeist around the world that homosexuality is being embraced, and that Singapore is the last hold-out against the inevitable triumph of gay marriage and the so-called normalization of homosexual relationships.

This falsehood has become quite prevalent in First World countries. Many Western powers, or at least their globalist-leaning leaders, are convinced that part of economic progress means sexual liberation and laxity. Nothing could be further from the truth. Undermining moral relations between men and women has a host of damaging consequences on societies and peoples. Chinese cultures were getting stuck because of the rampant disregard for natural relations between men and women. Ancient Greek city-states also collapsed with the decline and fall of the family, and the rise of rampant, militant homosexuality.

Singapore is indeed a strong, vibrant, enviable financial sector. That status is not in conflict with the nation's wise decision to criminalize acts of gross indecency between men.

These are the arrogant sentiments of the liberal media and LGBT activists when it comes to normalizing homosexual behaviors and transgender ideologies. They cast anyone who opposes the rank promotion of perversion as "backward", "not with it", or worse yet "bigoted".

It's stunning and sad to see how biased, how bereft of integrity the media have become around the world. They need to be held accountable for this deriliction of duty, and pro-family activists must stick to their convictions and confront such chronological snobbery categorically.
Posted by Arthur Christopher Schaper at 11:32 PM