Ric Grenell, and the Myth of Gay Christians

Fellow conservatives ask if the issue of an openly gay "conservative" serving in the State Department has only recently become an issue.

It was an issue then as it is now.

I am fed up with the normalization of homosexuality, Left as well as Right.

He needs to step down. Why?

He has been going around the world seeking to decriminalize this perverse behavior. This is a globalist agenda, and it's not commensurate with our elected officials focusing on American concerns. In fact, as a domestic matter, LGBT indoctrination and imposition has become full-blown and must now my curtailed.'

I wrote at length why decriminalizing homosexuality and normalizing the behavior here in the United States is not acceptable at all. Check out my full comments on that issue here.

Homosexual conduct, even if conducted in private, has public consequences. And this whole agenda was never meant for LGBT behaviors to remain "in the closet" to begin with. From 1987 onward, the homosexual lobby insisted that their behaviors be recognized as normal and natural, on the same plain as natural marriage and natural sex acts within a married couple.

To the point rasied by someone else, that people of faith should preach the Gospel, but not judge, I submit the following:

Jesus said on the Sermon on the Mount "Condemn not, lest ye be condemned." That's the full import of the word in the Original Greek "diakrino".

We are expected to judge, in that one makes a difference between truth and error, right and wrong, holy and unholy.
And of some have compassion, making a difference (Jude 22) 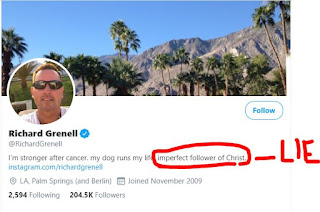 2. Mr. Grenell calls himself a Christian:

But living out a homosexual death-style is incommensurate with walking with God, living under His grace:

"Know ye not that the unrighteous shall not inherit the kingdom of God? Be not deceived: neither fornicators, nor idolaters, nor adulterers, nor effeminate, nor abusers of themselves with mankind, 10Nor thieves, nor covetous, nor drunkards, nor revilers, nor extortioners, shall inherit the kingdom of God. 11And such were some of you: but ye are washed, but ye are sanctified, but ye are justified in the name of the Lord Jesus, and by the Spirit of our God." (1 Corinthians 6:9-11)
The point being, once we become one with Christ, we are called to reckon ourselves dead to sin, but alive in Him (Romans 6:11-14).

Homosexual conduct is a form of death, and it is sin. For someone to say "I am a gay Christian" is to negate the Finished Work of Christ, it is to NOT walk in the truth (cf 3 John 4)
In fact, to someone who calls himself a Christian and yet lives openly in such perversion, this needs to be our response:

"But now I have written unto you not to keep company, if any man that is called a brother be a fornicator, or covetous, or an idolater, or a railer, or a drunkard, or an extortioner; with such an one no not to eat." (1 Corinthians 5:11)

Mr. Grenell needs to go. Furthermore, TPUSA is wrong to celebrate this man, as well. It's time to take a stand for family, as well as faith and freedom.

I understand that members of the audience at Calvary Chapel Chino Hills confronted Charlie Kirk about promoting so-called gay "Conservatives." More of us need to do the same. We need to pressure the President to respect the law of the spirit of life, the laws of nature and nature's God--and that includes a rugged rejection of homosexuality, transgenderism, and like sexual perversions.