While the world is slowing down because of the Coronavirus Crisis, I notice more silver linings resulting from this necessary pause on a world that has spun out of control.

Homosexual pandering in public, in corporate America, among political elites has taken an unprecedented hit. It's a welcome sign that there is a slow return, if not by force, to biological and moral normalcy.

In their latest eblast/news release, Equality California announced that they would be postponing their award ceremonies and shutting down operations for the time being:

Now this is welcome news.

They had to close all their offices.

They have to postpone their award ceremonies.

Oh, and it gets better (no pun intended). From the Twitter feed of Assemblyman Kevin Kiley:


The California Legislature will be recessing until April 13.
— Kevin Kiley (@KevinKileyCA) March 17, 2020

Californians across the spectrum should feel safer, knowing that the state legislature cannot induce more harm than they already have.

This is a pro-family victory in itself. 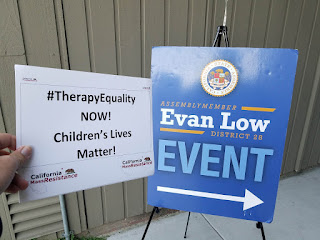 Lots of bad bills have been introduced for this legislative session.

One of them comes from the infamous LGBT activist Asm. Evan Low. He has introduced yet another foolish, perverted, elitist pro-LGBT bill, AB 2826, which would phase our department store sections for boys and girls. This is beyond madness, and the fact that this and other lawmakers are going to such lengths to impose this LGBT hegemony on private industries is very offensive.


Meanwhile, some consumer groups have already come out in opposition to AB 2826.

“Toy aisles are fine since most stores already do that and most are for anyone anyway,” said consumer advocate Grace Wayne. “But many people are upset about clothing aisles. Children’s underwear is different for certain reason like adult underwear, and there are significant differences in clothing even at a younger age. It has nothing to do with clothes color or designs but more about shape and structure of it.”

“Some others I’ve talked to are outraged because they’re afraid that this could lead to a confused gender-identity, but many of us aren’t very much concerned about that. It’s more about how clothes is designed for each gender, even at a young age. Also, children that young may not be prepared to learn about certain parts of gender differences and other similar problems.”

“This shouldn’t even b a law since most stores already do this regardless. Give it 5 years and pretty much every store is going to combine aisles anyway.”

“And then, what about Amazon? They’re online in California and they separate. Do we do it to them too?”


“It’s not about challenging the freedom of expression, it’s teaching kids that different clothing for different genders has a purpose for each sex.”

AB 2826 is due to be heard in Committee in late March.

This legislation would probably have met a slow death in a key committee, if it gets assigned a committee at all.

BUT ... the state legislature has gone into forced recess for a month!

This delay and other delays will become more commonplace, no doubt, since the legislature is closed for a month. This pause will also ensure that Asm. Evan Low cannot gut an amend one of his bills to attempt to ban reparative therapy for adults.