I must be careful how I characterize this development.

Indeed, this latest death is a natural consequence to engaging in unnatural behaviors.

Terrence McNally, the gay playwright who pushed LGBT themes of all sorts in his writing, has died.

He passed away from complications due to the Coronavirus problem. Another clearing-out of this wretched agenda, certainly, and it makes sense that this virus is wreaking such havoc.

Award-winning playwright Terrence McNally has died in Florida of complications from coronavirus, according to his husband Tom Kirdahy.

The four-time Tony winner, 81, was known for his thoughtful chronicles of gay life, homophobia, love and AIDS.

One has to wonder how many people actually watched his plays, movies, etc. Who would have thought that homosexual themes would be so dominant in our culture? They are certainly prevalent in New York City, along Broadway. It's quite telling that the Coronavirus problem has shut down all the theaters. This is quite a silver lining.

McNally was a lung cancer survivor and had lived with a chronic obstructive pulmonary disorder.

One of America's great playwrights, he wrote more than three dozen plays in his nearly 60-year career.

Beginning on Broadway in 1963, McNally still had his name up in lights until last year's revival of his play Frankie and Johnny in the Clair de Lune, starring Audra McDonald.

Most people won't know this off-hand, but this play contains considerable nudity. This is not acceptable. Why would the theatrical elite go out of their way to celebrate such blatant perversion?

"I like to work with people who are a lot more talented and smarter than me, who make fewer mistakes than I do, and who can call me out when I do something lazy," he told the LA Stage Times in 2013.

"A lot of people stop learning in life, and that's their tragedy."

It's unfortunate that McNally didn't learn that engaging in sexual relations with the same sex is destructive and harmful. It's quite unfortunate that the deeper issues he struggled with were not resolved, either.

Broadway and New York theatres - the institutions where McNally made his mark - have been closed for more than a week due to the coronavirus outbreak.

He died in hospital in Sarasota, Florida, on Tuesday, his representative told US media.

He leaves behind his husband. The pair were joined in a civil union in 2003 in Vermont and married in 2010 in Washington, DC.

"His husband" -- this rhetoric needs to be denounced outright. A man cannot be married to a man, no matter who failed and foolish statutes are imposed in a state or an entire country. This is anti-biological, immoral nonsense.

McNally's career - often tackling themes and subjects widely seen as controversial - was not without its stumbles.

His first Broadway play And Things That Go Bump in the Night, written when he was just 24, was panned - Newsday called it "ugly, perverted, tasteless" - and closed in less than three weeks.

Ugly, perverse, and tasteless describes the entire LGBT movement, and the nonsensical idea that two men can be "married".

Interestingly enough, this obituary does not mention his offensive, sacrilegious play "Corpus Christi", which depicts Christ Jesus and the Twelve Disciples, who worked with Him during His earthly ministry, as active homosexuals.

This play was beyond offensive, and it met with numerous protests and demands for its cancellation. Like his first play, this fraud was ugly, perverse, and tasteless.

The protests against the play rivaled the number of people, mostly more of the same liberal, pro-gay, or actively-gay New York elites, who had demonstrated in support of this trashy send-up of the Gospels. Playbill reports:

Possibly satisfying some of the anti-McNally protestors was the Wednesday morning New York Times review by critic Ben Brantley, who observed that the play was “flat and simpleminded” and it offered “many instances of the threadbare religious humor common to college revues.”

What was the purpose of writing such a play in the first place? It sure sounds as if McNally was looking to mock and inflame views about faith and life, nothing more. Such is the result of art in modern times: classical standards of truth and beauty have been abandoned, replaced with a dirty interest in shocking, scandalizing, and offending people. How is this art?
Speaking to Vogue magazine in 1995, McNally said he would "win, hands down, the contest for worst first-place reviews - or any-play reviews".

This admission says quite a lot. Why did so many of his plays get panned? Probably for pushing the LGBT themes onto a public which has grown slowly but surely tired of homosexual antics getting such royal treatment.

But McNally persevered, going on to write dozens of plays, almost a dozen musicals and multiple operas.

He received a lifetime achievement award at the 2019 Tony Awards.

This is virtue-signalling for the liberal NYC Theatrical Elite, no doubt. Here in his acceptance speech, he goes out of his way to boast about "softening parents' hearts" to accept their children if they engage in homosexual acts and LGBT behaviors.

Standing before the crowd, with breathing tubes visible over his tuxedo, he joked that the accolade came "not a moment too soon".

"Theatre changes hearts, that secret place where we all truly live," he said at the ceremony.

"The world needs artists more than ever to remind us what truth and beauty and kindness really are."

Homosexual activism and the destruction of family do not promote truth, beauty, and kindness. 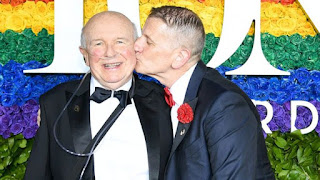 Homosexual couples are rarely founded on, based on a sense of age equity or maturity. The "husbands" is nearly thirty years younger than McNally. These kinds of arrangements remind many people of younger men looking for the love that they never found in their fathers. This kind of matching up is pretty disturbing.

Marriage is for one man and one woman. Men are not going to find the deeper needs for love and affirmation in another men. If their fathers did not provide for them what they needed, they should gain a greater revelation of God's love for them, the love of the Father (1 John 2:15-16). This aberrant attempt to compensate for the lack of a father's love by "marrying" an older man is doomed to fail.

Why should a foundational institution such as marriage be so brazenly trivialized in order to stoke the baser needs of broken men? McNally should have written a play on that subject.