I know that I may draw some flack for writing this, but here goes.

Frankly, with the spread of Coronavirus Flu among homosexuals, and now among San Diego County (mostly gay) Democrats, it comes as no surprise to me.

They were asking for this outbreak of the such contagions by virtue of the fact that they engage in unvirtuous, perverse behaviors. No, I do not believe that the spread of this disease is God's way of punishing the world for its sins. All the sins of the world were punished on the Body of His Son, Jesus Christ:

"1My little children, these things write I unto you, that ye sin not. And if any man sin, we have an advocate with the Father, Jesus Christ the righteous: 2And he is the propitiation for our sins: and not for ours only, but also for the sins of the whole world." (1 John 2:1-2)

Still, there have been many bad actors in our world who have gotten away with all kinds of sins, perversions, crimes, and wrong-doing.

They are reaping what they have sown. They are receiving the consequences for their evil deeds, and there is nothing wrong with rejoicing in seeing them receive a just recompense for their behaviors.

"Seeing it is a righteous thing with God to recompense tribulation to them that trouble you;" (2 Thessalonians 1:6)

"Dearly beloved, avenge not yourselves, but rather give place unto wrath: for it is written, Vengeance is mine; I will repay, saith the Lord." (Romans 12:19)

The San Diego Democratic Party has openly supported and promoted allowing adult sexual entertainers to be around children. They are promoting perverted, destructive LGBT causes throughout San Diego County, and recently they were harassing citizens in Chula Vista, CA who do not want children to be harmed and perverted with LGBT lies.

Now, some of their members are suffering consequences.

Let's start with the report from the Voice of San Diego:

In the weeks following Election Day, Democratic candidates, activists and operatives did what they normally do: They celebrated victories together and enjoyed a temporary end to the demanding hours they kept in the runup to polls closing.

Democratic Party victories in California are defeats and losses for everyone, even the Democrats themselves. The policies which they have been pushing harm everyone. This is terrible. Why do they hate children so much? Why are they pushing more government to oppress parents and children? Why do they want to normalize sexual deviance, disease, dysfunction, and ultimately death?

What is there to celebrate, exactly?

But this year, those days aligned with the early days of the novel coronavirus spreading through San Diego, and it appears many in those social-professional Democratic circles may have been infecting one another.

Chula Vista Councilman Steve Padilla tested positive more than a week ago, becoming the first elected official in California to publicly announce a positive test for the disease. He was later admitted to an ICU with worsening symptoms and has been put on a ventilator, his daughter announced in a statement.

Quite an announcement. Councilman Steve Padilla, the same councilman who was walking around with vicious LGBT protestors with signs like these: 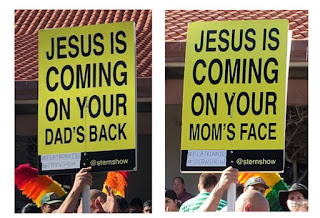 This same Steve Padilla thinks it's OK for sexual deviant entertainers to be around children.

This same Steve Padilla walked out on his wife and kids to shack up with a man.

This same Steve Padilla who called mothers and fathers, immigrants and veterans "white supremacists", now has the Coronavirus flu.

You know what? This proper retribution for his hate. I want him to recover and be restored to common sense, to stop pushing sexual perversion on children, but this is a just outcome for all the evil that he has been perpetrating in the city of Chula Vista.

Friends & Neighbors – I want you to know that I’ve tested positive for COVID-19. Here’s an update and video. pic.twitter.com/PIH7nuA4uF
— Steve Padilla (@StevePadillaCV) March 15, 2020

In the week since, Will Rodriguez-Kennedy, chairman of the local Democratic Party, and Kelvin Barrios, who came in first in the primary election for the District 9 City Council seat, both announced they too had tested positive.

Mr. Rodriguez-Kennedy thinks that immigrants, parents, citizens who care about their city and their children constitute a hate group. He lives an openly gay set of behaviors, of course, and he even boasted about the fact that helped fight for the repeal of "Don't Ask, Don't Tell" while serving in the Marine Corps. Someone needs to let him know that there has been an unprecedented number of sexual assaults have risen because of this repeal.

I wonder if Mr. Rodriguez-Kennedy is proud of that accomplishment.

And yes, he now has Coronavirus flu. This is quite a telling comeuppance, if I may be so bold.

Andrea Cardenas, a political consultant and party organizer who advanced to a November runoff election for a Chula Vista City Council seat, thinks she’s got it, too. She came down with what she thought was the flu on March 9, then went to urgent care on March 13 when she started experiencing shortness of breath and dizziness. She was treated for pneumonia and sent home.

The common spread of disease is all too prevalent among homosexual populations. The Democratic Party is dead set on promoting homosexuality. It seems only a matter of course that they would be afflicted with these sicknesses, too.

The next day, she learned about Padilla, with whom she had spent a lot of time after the election. And by then she knew Rodriguez-Kennedy and Barrios, both of whom she had also spent time with, were sick, though they had not yet tested positive for coronavirus. Another friend and colleague – Jehoan Espinoza, a member of the group San Diego Democrats for Equality who also worked on Ammar Campa-Najjar’s congressional campaign – had also tested positive, she said.

"San Diego Democrats for Equality" are lying about themselves. They do not support equality at all. They support special privileges for a militant minority, the LGBT lobby, at the expense of everyone else.

Cardenas went in for a test at Sharp Urgent Care in Chula Vista on Monday, March 16, when she finished her pneumonia medication and her situation hadn’t improved. She hasn’t received her results eight days later, she said.

“It would be very much a miracle if I wasn’t positive,” she said. “We had all been around each other for post-election stuff. And there’s other people we’ve been around who are sick, and they’re just like – there’s no point. No one is getting their tests back. People either aren’t getting tested, or they are and we don’t know the results.”

The LGBTQ Victory Brunch was a significant post-election event, an annual affair in which elected officials, political professionals and activists celebrate LGBTQ officials.

It occurred on March 8, and many party members noted that several of the people who’ve announced positive tests were in attendance. Padilla, though, said his doctors thought he could have been exposed March 10 when he flew through San Jose, where TSA agents had been infected, on his way to chair a California Coastal Commission hearing in Santa Cruz. But that occurred after the Victory Brunch.

This is another telling irony. The LGBT groups are collectivist in mindset, and they don't promote safe or healthy practices as a rule. People abusing their bodies with the same sex in order to find or share "intimacy" is just nonsensical.

“It’s just such a tight-knit community where we don’t know how far it’s reached,” Cardenas said. “We don’t really know how it got introduced, but the reality is it did affect our community really closely, and it hit home for a lot of people.”

"Tight-knit" indeed, certainly considering the number of sexual partners that many homosexuals have. This pattern of conduct cannot be ignored or downplayed

The apparent spread within the Democratic community has rattled many activists and campaign workers who frequent those circles. Many have announced on social media that they too have been sick, though some have tested negative or didn’t seek testing.

This is telling retribution. Democrats should be afraid. They are pushing all kinds of perversion in the state of California, including San Diego County, and they should be held accountable for all of that!

The San Diego County Democratic Party is a hate group.

They hate life, since they are so vocally pro-abortion.

They hate family, since they promote the LGBT agenda at the expense of natural law and individual rights.

They hate anyone who stands up for what is true, right, and good in any community. I have spoken with registered Democratic voters, and they are so ashamed of their party, that they can't wait to vote Republican, or to disaffiliate entirely from the party apparatus.

As for the spread of Coronavirus flu among Democratic Party operatives, they are simply reaping what they have sown, and they are paying a price. Hopefully, the price will not be so steep that individual partisans don't learn the much-needed, though rarely heeded lesson: don't mess with the laws of nature and nature's God.
Posted by Arthur Christopher Schaper at 11:40 AM