About three weeks ago, I attended an open forum at Ellen Ochoa Learning Center.

I confronted Mayor Markovich and presented him a letter from the Public Integrity Division of the LA County DA’s office. When the mayor explained his absence, I followed up on his reason.
I received an email from the City Clerk’s office, which informed me that Mayor Markovich did indeed submit an email, that a personal matter prevented him from attending.

Yet that one setback does not excuse the months of spending money which the city does not have, or of repeatedly attempting to silence dissent, criticism and demands for accountability and honesty from its members, nor does it excuse the city council for refusing to rescind the blasted Sanctuary city policy.

Frankly, a number of reports have informed me that because of this city council’s reckless lawlessness, ICE agents eventually arrived and began deporting illegal living in this city.
Just like Barack Obama’s brazen executive tyranny, this council’s disregard for federal law created the opposite of its intended effects. 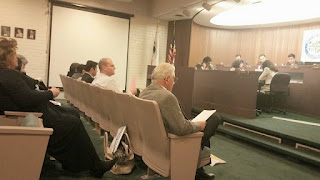 We have one rule of law in the United States of America. Local officials have neither authority nor moral standing to ignore, waive, or violate that code because they do not agree with it.
Residents in and around this community have told me that the actions of We the People Rising have been fruitless, silly, or disruptive.

The truth is, this council’s routine corruption, from awarding contracts to friends, to routinely silencing members of the audience.

Residents in and around this community have told me that the actions of We the People Rising have been fruitless, silly, or disruptive.

The truth is, this council’s routine corruption, from awarding contracts to friends, to rampant intimidation of local leaders, to its ongoing attempts to stifle public comment have exposed the truly fruitless, silly, and disruptive elements in this room.

The four boys-not men—sitting at the dais, who continue to vote “yes” to their own limited interests at the expense of the public interest.

I guarantee to you today, that I will forget you. Your lawless deeds are being punished, and there will come a day when you will wish for us to return, for our protests will seem like a light entertainment compared to the terrible consequences awaiting your corruption, waste, fraud, and outright immoral lack of judgment.

With all of this in mind, I am submitting to you my poem “Citizen Sanctuary”, as a reminder that cities are for citizens, designed to protect the needs of those who live in this country legally.

Thank you.
Posted by Arthur Christopher Schaper at 9:08 PM