In Fresno, an assembly seat has opened.

AD-31 encompasses the entire city and some outskirts. 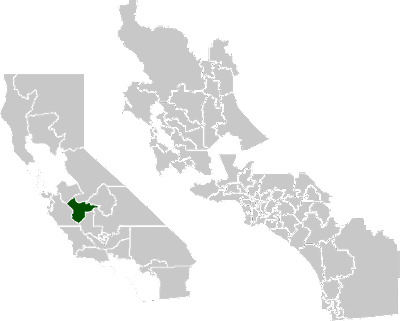 Mainly a agricultural region, with an urban core based in Fresno.

Incredible. A disturbing number of incumbent Democratic lawmakers think it's OK to give up their elected responsibilities to pursue something else! Perhaps the legislature should look into charging incumbents for the special elections they end up creating!

So, who's running to replace Perea?

Three candidates have emerged for the special election, to be held April 5th.

Clint is a journalist, a family man, and he serves on the Fresno City Council.

In spite of a slightly higher registration, Valadao has held onto his Congressional seat for the last two cycles. Despite the Democratic Congressional Campaign Committee's hardest efforts, they cannot unseat him.

As for Jim Costa, business and agricultural interests have gotten more frustrated with him from year to year. Dairy farmer Johnny Tacherra, who ran on a consitutional conservative platform, came within three thousand votes of unseating the long-time incumbent. Shortly after the polls closed on Election Night 2014, Tacherra was ahead. No one was paying attention to this Congressional district. With a higher voter turnout predicted not just for Democrats, but also Republicans (and a number of Trump supporters registering as Republicans), Tacherra may win the seat this year.

How does all of this play into Clint Olivier's campaign?

He is a down-to-earth professional. He has gathered a great deal of support from diverse interests throughout the state. He wants to end the tax-and-spend, regulate-frustrate cult dominating Sacramento.

He wants to bring water back to Fresno, rather than helping fish at the expense of farmers. The environmental bullies have ignored then rejected the needs of Central Valley families. This big government abuse must end.

And Clint will make sure of it.

The unemployment rate in Fresno? 11.1%! Outrageous! During the 2014 Gubernatorial campaign, Republican candidate Neel Kashkari lived on the streets in the city to gain  a better perspective on statewide poverty.

California lawmakers need to get the government out of the way and let businesses thrive, and the agricultural industry grow!

The Crazy Train is an insane pipe dream, an empty progressive legacy

4. End the Dropout Epidemic and Improve our Schools

Working men and women need a uality education to compete and thrive. Vocational schools are disappearing at an alarming rate. On the other hand, college degrees are not worth what they used to be, or have become prohibitively expensive.

Olivier's toughest opponent is Arambula, and he has released nothing but lies and distortions to slow down the Fresno councilman's momentum.

Joaquin Arambula and the Sacramento special interests supporting him have sent voters deceptive mailers like this one.

Joaquin and his special interests are so desperate, they had to import their controversy from outside the 31st Assembly District.

California residents need more legislators paying attention to the needs of the people, the state, and our posterity. Democratic power brokers are focused on their next legislative victory or shoring up wealth and influence for a few well-connected interests to everyone's hurt.

We need to bring balance back to Sacramento. We need to send a clear and convincing message to the

For any concerned Californian who lives outside the district, click here to get involved!