CA Teacher Shortage (What and Why)

I have read at least three different blogs in the last month detailing the massive teacher shortage crushing the state of California.

Colleagues and close friends who work in education have also told me that a teacher shortage is coming. In fact, it's already here. One Torrance teacher told me that she had to cancel a professional workshop because the district could not find a substitute to cover her class for the day.

Why is there such a massive shortage?

The massive layoffs following the great recession pushed so many quality teachers out of the profession -- suddenly and in many cases arbitrarily. A significant number of those professionals could not wait for a teacher opening, since they had spouses, children, houses to preserve and protect.

Many of these qualified, caring people had to find another career. Many did, and have no intention of returning to the classroom.

As a former teacher, I can attest that a teacher's power has become significantly diminished. It is harder for the teacher to control his or her class, without micromanaging lawyers, bureaucrats, and left-wing anti-authoritarian advocates forcing all the power into the hands of the student.

Besides, a teacher's salary is high enough for many seeking to improve their lot in life, to buy a home, and to ensure a strong quality of life for their kids.

Here are some other takes on the teacher shortage crisis in California.

From the CA Political Review:


What is the role of the State in creating the current teacher shortage and what is its role in ending it? In 1975 the teacher shortage started. That is when Guv Brown—confused even at that young age, signed the Rodda Bill—this was the legislation that forced government school teachers to pay extortion to unions, if they wanted to work. Add to this the current demand of the State to mis-educate students with Common Core.

Union dues do take a chunk out of teachers' wallets. They also force them to sit and watch unions pursue policies inimical to their individual or career interest. More bureaucracy will not help teachers work with their students. Forcing the minimum wage will not help the students find good paying jobs, starting at entry level and then working their way up in any company.

Teaching is a profession, and yet the teachers are not treated professionally. No training, no support, no chances or remediation when they fail. 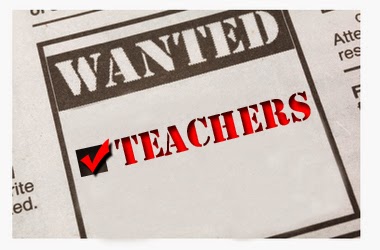 KQED reported on an accute special ed shortage in Oakland, CA a few days ago:

I was listening to a special education program director at a local school board meeting.

They are struggling to find enough teachers to deal with the demand. Parents push against the district and seek accommodation for their kids, even if district staffers conclude that the student does not need additional special ed assistance.

Are students over-medicated? Perhaps. Are too many of them labeled with special ed needs, when a more basic problem is the issue?

The growing demands on special education staffers may be discouraging potential teachers, too. More laws, more regulations, more demands on the individual educator. When there's a shortage, the special teachers who remain take on greater burdens.

KQED had reported on the teacher shortage crisis in special education before because of the high turnover rate:

We know high teacher turnover hurts students’ learning. Special education teachers across the country leave their jobs more often than other teachers do.  It’s a huge challenge to fill those vacancies.

How about dealing with the causes for the turnover? Teacher burnout? Lack of support? Lack of adequate preparation and training?

The Oakland area school board approved a number of emergency waivers that year, and yet ...

During the first three weeks of school, the Oakland School Board had to approve 36 waivers for teachers without a full credential. Sixteen of those were for special education teachers. In the third week of school, there were still 13 special ed vacancies.

How much are Oakland teachers paid, anyway? I looked over the Oakland Education Association contract, and could not find a salary schedule. Previous salary schedules listed starting salaries at $39,000. The cost of living in the Bay Area is astronomical, and rising. Native born residents in those regions are getting priced out of their own home communities.

Does anyone really think that prospective teachers will suffer such low pay in high priced areas, to take on a rough job with little authority, no support, and an exponential growth of responsibilities, plus the extended list of state and federal mandates?

And I have not even mentioned Common Core!
Posted by Arthur Christopher Schaper at 9:32 PM