Since late October, 2015, Edgar Cisneros has served as the city manager for the corrupt Huntington Park City Council.

At first, I gave him the benefit of the doubt.

He was just installed as city manager, after all. How would he have know what was going on in the city.

His "work" with the Huntington Park City Council is a match made in hell.

For the previous two months, I issued threats to the city manager, that I would visit the Montebello School Board meetings.

Why? Because Cisneros is a trustee on that board.

He is not just a liberal bureaucrat. He is a political functionary, probably with big ambitions, like a lot of uber-liberal politicians in Los Angeles County.

Finally, I found the time to run up to Montebello, and pay the school board a visit.

From the South Bay to East Los Angeles takes about an hour to drive.

Yet even arriving twenty minutes early, the main administrative building was packed.

There were teachers everywhere!

School personnel were lining the hallways, and they even gathered behind the building, too.

For about ten minutes, I connected with some of the teachers in the room, trying to find out what was going on.

The Montebello Teachers Association and the school board had reached an impasse. Labor negotiations had grown intense, with no sign of letting up.

They want better pay, they want more supplies, and they want support and respect from the district.

Within ten minutes, a Montebello Unified School District police officer approached me and asked to speak with me outside.

He told me that the superintendent informed him that no one could pass around negative flyers in the building. As usual, the police officer excused this violation of the First Amendment by stating: "I am just following orders."

The officer tried to intimidate me, first by asking for my ID then my name. I have taken Criminal Procedure classes, and I know my rights. I refused to show him my ID, since I had done nothing wrong. He asked for my name. Then he said: "If you are disruptive, I will have you removed from the building."

I went back inside, and I passed out two more flyers anyway. Another teacher took a picture of the flyer in my folder, then shared it with others. The First Amendment trumps the petty will of a local appointed official every time. When I shared with the police had done to me, other teachers heard and could not believe what was going on. That story spread quickly, which opened an opportunity for me to talk about Huntington Park and particularly Edgar Cisneros.

In general, the teachers were extremely unhappy with the school district. The teachers are working with fifteen year old teacher materials. They hate Common Core, and the district has provided them no adequate training. The state of California will be funding the district with the highest funding increase in the district's history--$30 million--but the district wants to hold the funding in reserve for a higher credit rating.

Why a higher credit rating? The school board wants to float a $300 million bond for technology and building upgrades. In fact, one of the first presentations focused on polling within the district which signaled support for a bond.

I spoke with one of the teachers about this issue, discussed extensively by one of the district staffers during the meeting. Where did all the Prop 30 money go? Aren't homeowners and taxpayers struggling as it is with higher costs of living and taxes?

For the next hour and a half, I talked with other staff and personnel showing solidarity with the union and against the board.

I told them about Cisneros and the corrupt Huntington Park city council, too. Some of the attendees were really interested in learning more about of the school board members, who was playing hardball with the district and remained tight with the funding.

For the next hour, I listened to union leaders, teachers, and students criticize the school board for lack of funding.

Then it was my turn to speak.

I finally rolled into the chambers, which are remarkably small. Cisneros was surprised to see me and didn't look too happy. I then announced: "I told you I was coming,"

I read my remarks, showing the audience what was going on in Huntington Park, and the board member/city manager's role in the corruption.

I also slammed the superintendent for frustrating my First Amendment rights to pass out flyers in the lobby outside of the board room. In my final remarks, I ask the school board to issue a censure motion against Cisneros for his complicit actions with the Huntington Park City Council.

I could feel the anti-Republican sentiment from some members of the audience and in the overflow rooms. I did not care. Regardless of the political affiliations of different--and diverse--individuals in the building, a sense of mutual respect for our individual interests and anger with the poor financial decisions of the school board (including Cisneros) emerged preeminent.

I was pleased that what I had to share resonated with some of the teachers I spoke with. Some of them took pictures of me and my posters. 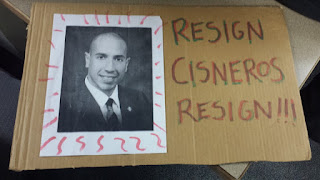 The students who protested and later spoke to the school board faulted not just the low salaries for the teachers, but the terrible textbooks and other resources for the students, even though they district had granted major pay raises to higher level staff.

So, is the Huntington Park Corruption working its way into Montebello, too, with Edgar Cisneros leading the way?
Posted by Arthur Christopher Schaper at 11:12 PM