I Still Choose Ted Cruz (and So Should You!)

Everybody has those days.

When you want to stand at your colleague’s office door and shout: “I’m as mad as hell, and I’m not going to take this anymore!” Yes, the “Network” moment, when we channel our inner Howard Bealle and appeal to whoever is listening to hear how frustrated we are. But if I am not happy with how the world is whirling, I don’t just ask to get off. I get up and so something about it.

Anger should lead to effective action, not ineffective meanderings.

Granted, lots of Americans are angry. Obamacare, terrorism, lawlessness, cronyism, and corruption abound. Yet ingenuity, hard work, and a dedication to principles pave the pathway to success, even if the world seems dead-set against you.

Whatever you and I can’t take anymore, we can do something about it, whether in the work place (get a better job) or in our relationships (change your mind, speak your mind, and mind your own business).

And even at the ballot box.

Super Tuesday was indeed Super for my Presidential pick Ted Cruz … and for me.

His campaign is playing strategically, winning more delegates, and now surging into second place. They even took over Alaska, depriving the current front-runner another symbolic victory through a now less-esteemed endorsement he had received one month ago.

Sorry, Sarah, but the kingmaker you hoped to be is not quite yet to be.
I may feel upset about Washington, but I am not about to let anger, blind to the facts and alienated from the truth, decide for whom I cast my ballot.

More people I talk to do not want Donald Trump. Conservative writers everywhere are exposing his litany of liberalism. The guy loved—still loves!—Planned Parenthood. Whether your love or the PP, why is this and other private institutions getting million dollar taxpayer-funded handouts? Trump and Kasich think that Kim Davis should have handed out the marriage licenses, or resigned.

Who stood with Kim Davis, the Kentucky county clerk who sat in a jail cell just because the Supreme Court went beyond its bounds?? Ted Cruz. That’s why I choose Ted Cruz to be next President (and I hope you do, too). 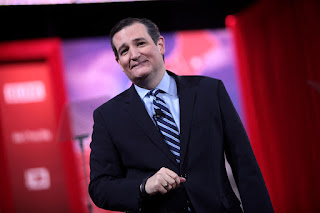 Who called “Ditch” Mitch McConnell a liar for reauthorizing the cronyist Ex-Im Bank? Cruz. Who has profited from bankruptcy laws? The Donald.

Who says that they will stand with Israel without doubting? Cruz. I don’t have to name those who have called “neutral” on the conflict.

I do not want a deal maker. I want a mover and shaker.

And yet the loudest critics of the first-time US Senator keep claiming that he lives in the pockets of the Big Banks and Big Business. Look at the votes, people. Where has he stood on issue after issue? Don’t like some of the floor speeches? How about the fact that he has rejected every bloated budget coming out of the Washington Cartel?

Conservatives have complained for decades that the Government taxes and spends too much, with more regulations and rules to frustrate commerce and delay prosperity.

Who stood for twenty-two hours expose the economic and moral terrors of Obamacare? Ted Cruz.
Adam Corolla has advised his conservative viewers: “Don’t vote for someone who says “I will fight for you.” That’s fine. Ted Cruz is already fighting for me, because he has pushed for a retraction of the state into our lives, walking the walk, talking the talk on the floor of the US Senate and on the field of public opinion.

Who else is left to run for President?

Carson? I wrote before: “not presidential material.” I never said he couldn’t serve with distinction, but not in the White House. A US Senate seat could be open if he wants it … in Maryland or in Florida.

John Kasich? This man parades his anti-conservatism and calls it good. Toss that cupcake!

To my good and consistent conservative friends who are banking on Rubio, now is the time to let the Rubio charm to rub off and away.

I esteem his foreign policy chops, but on other issues which matter—liberty, immigration, and leadership qualities—the one-time junior US Senator from Florida comes off as just that: junior. Not ready for the big leagues, and certainly not in league with executive necessities, which stake out clear principles from campaign to retirement and stick to them. I am certain he has big hands (and yes, probably larger than Trump’s), but I am not ready to hand him the Presidency. Rubio, you need to go. Private sector experience suits you best, and then come back to fray when you are ready to fight for our rights.

And as for Donald Trump …

He comes off as a Eurotrash, Big Government nationalist. Yes, I want secure borders, but I don’t want to be a victim to a domestic despot who will expand the state, and loves that Obamacare mandate. I want a candidate who is pro-America, but understands what American entails—and defines:  pro-liberty, pro-limited government, pro-constitutional rule; free markets, free enterprise, and free people. I want more than platitudes about a big wall, or fixing things, or making deals.
I choose Ted Cruz for President!

We don’t need someone who pounds the pavement with “Make America Great Again” on a banner behind. I want someone who recognizes what makes America great. For me, that means the real deal Presidential candidate who has fixed our nation’s eyes back on the supremacy of our Constitution—and the rule of law.


I still choose Ted Cruz, and I hope you do, too, to serve as our next President.
Posted by Arthur Christopher Schaper at 11:33 PM