Without going into greater detail, I have been talking with senior staffers and policy experts in and around Sacramento.

The votes to move AB 2943, aka the "Ban the Bible" or "Ban Therapy Equality" bill are not materializing as easily or as quickly as the bill author, Assemblyman Evan Low (D-Cupertino) and the LGBT Hate Machine were hoping.

The fact is that the first Assembly vote on this bill passed under the radar for many pro-family advocates and institutions. Major non-profits in and around the Sacramento area didn't send out any major information about stopping this bill.

Even without much opposition from pro-family, pro-life, and First Amendment advocates, the bill got 50 votes (I would submit only 50).


Two Republicans voted for this bill, and four Democrats abstained.

The Democrats had to get two Republicans to cross over to show some majority sentiment for this terrible bill.

In the state senate, the legislation stalled for another month during the July recess.

Now the state legislature has to pass all remaining legislation by August 31 (a hard deadline) if they want to get legislation passed to Governor Brown's desk.

One week has already passed, and there is no eagerness to bring this legislation to the floor yet.

More concerns have no arisen about this legislation.

The bill author and its main supporters in the state legislature are making the following arguments to allay fears about AB 2943:

1. "The legislation is about targeting therapists who guarantee an outcome, specifically the outcome that individuals with LGBT issues will renounce or break free of their same-sex attraction and/or their gender dysphoria." 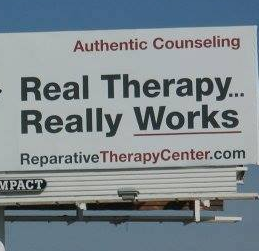 No reparative therapist of any background or connection suggests they can guarantee results. No therapist in any field guarantees any come. So this is fraudulent argument.

2. "We are going after fraud, in which someone offers some kind of therapy, and yet doesn't produce the results, or worse offers some good or service which is inherently fraudulent."

The TRUTH: There are statutes on the books in every statehouse and in the United States Code which punish fraud. There is no reason to propose additional legislation to go after fraud in a specific category. State Senate Scott Weiner declared on the floor of the State Senate that reparative therapy was a fraudulent practice, akin to snake oil. There is one problem with this argument: it is completely false. Reparative therapy has worked for many people, has set them free from damaging and destructive behaviors.

Check out the testimonies from OnceGay.com for examples of lives set from the LGBT ideology. The legislation includes the following passage:

(a) Contemporary science recognizes that being lesbian, gay, bisexual, or transgender is part of the natural spectrum of human identity and is not a disease, disorder, or illness.

This is a lie. LGBT Behaviors are destructive, dangerous, deviate, and dysfunctional. They absolutely do qualify as mental disorders.

Here is another statement suggesting an appeal to authority to justify banning reparative therapy:


(d) The American Psychiatric Association published a position statement in March of 2000, stating:
“Psychotherapeutic modalities to convert or ‘repair’ homosexuality are based on developmental theories whose scientific validity is questionable. Furthermore, anecdotal reports of ‘cures’ are counterbalanced by anecdotal claims of psychological harm. In the last four decades, ‘reparative’ therapists have not produced any rigorous scientific research to substantiate their claims of cure. Until there is such research available, [the American Psychiatric Association] recommends that ethical practitioners refrain from attempts to change individuals’ sexual orientation, keeping in mind the medical dictum to first, do no harm.
These institutions were pressured to change their views and drop their opposition to homosexuality and transgenderism. There is no excuse for printing these statements in any legislative record, since they are patently false.

The language double-talk is astounding. While proponents of this legislation suggest that they are merely targeting fraudulent practices, they have defined reparative therapy of any and all kinds as fraudulent within the text of the bill itself!

With such horrendous fundamental premises for AB 2943, it is essential to oppose this bill.

3. "Two of the OnceGay.com witnesses declared that they were healed by "Therapy" alone, not "reparative therapy."  Therefore, banning reparative therapy would not hurt people who are just seeking basic help."

The TRUTH: This argument I heard from a staffer recently, and yet it attempts to skirt the major issue. The vast majority of clients who have used reparative therapy have been set free from homosexuality and transgenderism. They received clearly defined help from "reparative therapy". This argument from the LGBT support groups has now complicated their efforts even further. What if someone who is homosexual seeks counseling for issues, and after their sessions they resolve many issues and they end up leaving homosexuality and transgenderism? Will that therapist get targeted with civil sanctions and criminal penalties? The legislation does not protect this so-called class "neutral therapists."

4.  "We want to protect LGBT people from fraudulent practices and behaviors."

The TRUTH: This false premise is particularly insidious. Homosexuality and transgenderism are not identities. Simple as that. They are not the basis or the birth status of individuals. There is no genetic evidence to justify this argument.

Furthermore, because there is a record of individuals who have broken free from these behaviors and lifestyles, clearly one's status as a LGBT person can change.

Check out the account of former global LGBT Refugee and Activist Val Kalende of Uganda:


@Evan_Low Your arguments for #AB2943 suggest that people are born #LGBT.

Furthermore, this legislation is targeting therapy which adults seek on their own. I think it's condescending and offensive to treat adults, gay or straight, as though they cannot determine whether a therapy is true of false, whether it will help or hurt.

If individuals want to explore leaving one sexual preference for another, regardless of whether it's gay or straight, they should have that opportunity. It's about therapy equality, and on one should oppose that.

5. "This bill will only target fraudulent therapists."

The TRUTH: What will happen to other professionals who have a responsibility to inform their patients/clients about the physical and psychological dangers of homosexuality and transgenderism?

What about them? Professionals have lost their careers because of their firm stance against the LGBT Agenda and its lies. Dr. Paul Church is one disturbing example.

6. "Reparative therapy relies on abusive tactics and measures, like heating one's genitals or use of electro-shock therapy."

This is a flat-out lie, and yet LGBT advocates are still using this line of argument to justify this broad, abusive bill. There is no evidence that such practices continue unabated. No reparative therapist relies on such destructive practices to assist individuals who want to be relieved of same-sex attraction and/or gender dysphoria.

The fact that the staffers and other proponents of AB 2943 are having to scale back the overt agenda of attacking faith, family and freedom should embolden conservatives and pro-family activists across the state to call their Assemblymembers and stop this travesty.

There is no amount of revision and amending that will make this bill palatable. It's an intrusion, an overreach, and an unconstitutional travesty. There is no justification for removing a form of therapy which is productive and effective, which has saved countless lives. There is no reason to take away from sound adults the opportunity to seek any form of therapy to explore or relieve themselves of same-sex attraction and break away from the LGBT agenda and identity.

It is also wrong to take away from meaningful and well-established, licenses professionals their source of livelihood because a small yet vocal political minority has denounced reparative therapy.

AB 2943 is a bad bill, and the recent amendments have not improved this bill, since its fundamental premise is based on lies and tyranny.

Please contact your state assemblymember and tell him or her to reject AB 2943.

The following state reps are getting targeted with heavier outreach because they are more likely to oppose or at least abstain on this legislation when (or rather if) this legislation comes to the floor:


Please contact these representatives and urge them to reject AB 2943! 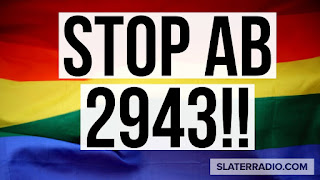