I am merely isolating this part of my previous article for emphasis' sake.

Then there was the Nick Fuentes debate. 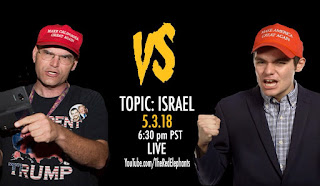 It was really hard to understand what was going on. I was trying to this kid's debate points seriously, but they really weren't serious.

Or rather ... this guy really isn't right-wing or America First.

1. Fuentes said he would rather live in a fascist state.
2. He declared that a woman is worth half of a man.
3. He questioned the Holocaust, which is his right, but then he complains that he is not a white nationalist or a neo-Nazi or anything like that (yet he sure talks like one ...)
4. Then they went off on their anti-Semitic rants against me at the end of the "Debate".

These guys are not America First.

They are America Last, and they are Iran First, or rather Palestinian Terrorism first, or Ayatollahs first.

They are America Last, and any line of argument, radio shows, or anything in between that suggests otherwise is a total left-wing, collectivist fraud.

Hatred of Israel and opposition to recognition of Jerusalem as the capital of Israel? Left-wing.

A commitment to racial segregation and ultimately separation? Left-wing.

Most importantly, however, when anyone claims that they would rather live in a fascist state than in a constitutional republic, there you have another left-winger, and someone who is as antithetical to the American experiment, to American exceptionalism.

Besides, fascism is a left-wing ideology.

Sorry, Nick. You are a fraud.

Why not Just Quit Nick Fuentes?

You are only scratching the surface on Leftist Fuentes. You should dig deeper into his relationship with muslim brotherhood sympathizer and supposedly ex girlfriend. pic.twitter.com/6KIQDbK3hT
— Victor (@orangecountyrat) August 19, 2018