Here is the full report from MassResistance President Brian Camenker about MassResistance's epic victory--third year in a row--to stop the unjust, immoral, and unconstitutional conversion therapy ban legislation in Massaschusetts, one of the most pro-LGBT states in the union, and the state where homosexual marriage was first forced upon the country.

This is a big victory, and even greater because I participated in this project for the first time as the newly-appointed Organization Direct for MassResistance!

Arthur Schaper, a veteran activist in pressuring state legislators and leader of our California MassResistance chapter, organized our Massachusetts effort. With his incredible energy, intelligence, and personal commitment he successfully directed our activists.

I feared the worst at the final hours of the formal legislative sessions--but we pulled it off!

Check out Brian's full report below:

Despite complete cave-in by “pro-family” state Senators – and corruption by Senate leadership. 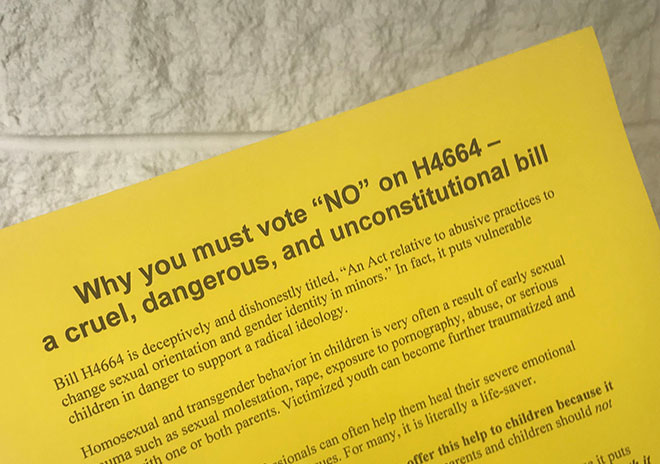 The MassResistance handout. When dealing with these legislators, you have to be very direct!

In state legislatures across the country, the well-funded national LGBT lobby has been pushing bans on therapy that would help youth deal with “sexual orientation” and “gender identity” issues. Unfortunately, they have been successful in at least 14 states. These cruel laws support a radical ideology – without care for the harm done to vulnerable children.
For the third legislative session in a row in Massachusetts the LGBT movement pushed a therapy ban bill – and again MassResistance was a major force in stopping it. This time it got farther than before: It passed the House, then ran out of steam in the Senate literally in the last few minutes of the formal legislative session (which ended July 31). 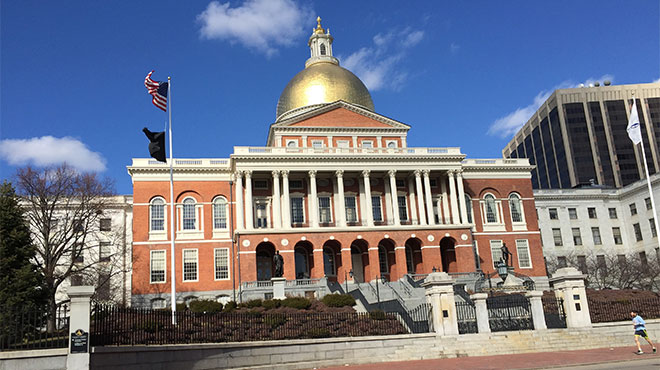 The Massachusetts State House is always a bad place to be.

The Massachusetts Senate is probably the most left-wing in the country, and arguably one of the most corrupt. So lobbying there was quite a challenge.

We don’t hold back. During the last two weeks of July, MassResistance activists relentlessly pounded all 38 members of the Senate with waves of phone calls, emails, and office visits. We took a very direct, no-holds-barred approach. Our handout was hand delivered to each member and also emailed to them multiple times. At the State House our activists used talking points we made for them.

Most pro-family groups take a “moderate” approach to this bill. They don’t want to offend the LGBT activists or the liberals. But that weak approach never works.

We described how homosexual and transgender behavior in children is often a result of early trauma such as molestation or rape, exposure to pornography, or psychological issues with a parent. Victimized youth can become suicidal if they don’t get help. Skilled professionals can help them work out these issues. We described people we know whose lives were saved by reparative therapy. But the radical LGBT activists want to ban this, because it would counter their ideology that they are “born that way.”

Thus, by passing this bill, they are helping harm or even kill children in order support a special interest.

We also informed the Senators that this bill is unconstitutional. On June 26, 2018, the US Supreme Court ruled in NIFLA v Becerra that the government cannot create a “professional speech” category lacking First Amendment protections. Of course, liberals don’t care about constitutionality, but we pushed this argument anyway.

In the last few days of the session, we intensified our efforts. In particular, we targeted the Senate leadership and the Rules Committee – where they had parked the bill until the afternoon of the last day of the session.

Big pressure by the LGBT movement

The LGBT movement pushed hard to get this bill passed. Their main strategy was to spread blatant lies and misinformation about this therapy – which we countered in our handout. And as usual, they brought together a “Coalition to Ban Conversion Therapy in Massachusetts” with dozens of Massachusetts left-wing groups.

Here's an example of the LGBT propaganda push: 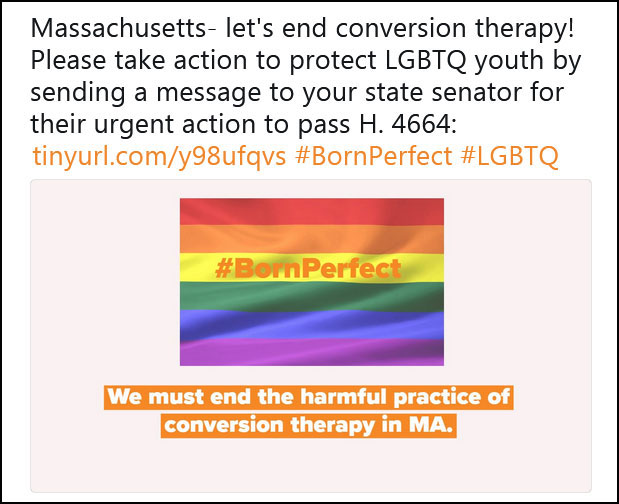 They were very serious about organizing. At “Boston Gay Pride” week in June they were passing out literature to inflame support for the bill and had numerous people recruiting volunteers. 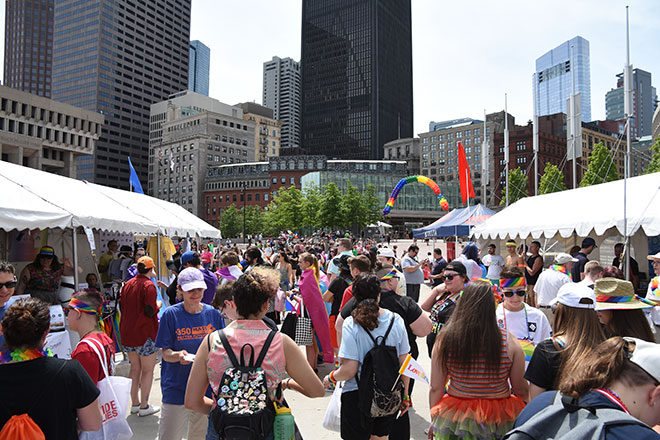 At the "Boston Gay Pride Festival" in June, they were organizing and passing out flyers to inflame support for the bill.

But for some reason, we still out-lobbied them in the last two weeks of the session. And in the end, the Senate leadership clearly got message that there was a lot of anger about this bill. They pushed it off until the very last few minutes of the formal session, when there was no time to effectively pass it and get to the Governor’s desk.

But it would have been easier to stop this bill if things had gone differently in the earlier stages.

In January 2017, at the beginning of the 2-year session, the LGBT movement filed identical bills in the House (H1190) and the Senate (S62). This is a common strategy. They see which one moves forward and then ride with it. (When we refer to “the bill” in the singular, we mean the current version of the bill being acted upon.)

A public hearing was held on June 6, 2017. Similar to the public hearing on their anti-therapy bill filed in 2015, the usual crowd of far-left and LGBT activists were brought in to “testify.” (See our short but powerful VIDEO from the 2015 public hearing!)
Other pro-family groups in Massachusetts announced that they were taking the lead in fighting the bill this time. So MassResistance backed off and focused our efforts in other areas. They took a more “moderate” non-confrontational approach, and did not want to offend liberal legislators.

On June 27, 2018, the bill came to the House floor. Conservative House members were able to persuade the leadership to take out a particularly egregious section of the bill, which would make such therapy considered child abuse under the law and force “mandated reporters” to report any case if they found out about it. The pro-family people considered this a “victory.” But the other terrible parts stayed intact. The changes to Bill 1190 were re-issued as Bill H4664.

The House then voted and passed H4664 by 117-34. Shockingly, if you look on the roll call sheet, you will see that a majority of the Republicans voted “yes” on this horrible legislation, including Geoff Diehl, Shaunna O’Connell, Todd Smola, and Brad Hill.

It was a disaster. In the past, it never even got to the House floor. Obviously the “pro-family” lobbying was not working. So MassResistance decided to get involved.

Bill H4664 was then sent Senate, which put it in the Senate Rules Committee. As described above, starting on July 13 MassResistance began its full-court press on both the Rules Committee and the entire Senate.

Arthur Schaper, a veteran activist in pressuring state legislators and leader of our California MassResistance chapter, organized our Massachusetts effort. With his incredible energy, intelligence, and personal commitment he successfully directed our activists.

The sleaze on the final day – July 31

(The detail here is a bit tedious, but very interesting.)

On the last day of the session, July 31, the Senate and House were both in marathon sessions to finish their business before the midnight deadline. At 1:00 pm in the afternoon, the Rules Committee told us the bill was still there.

Somehow that afternoon, the bill got voted out of the Rules Committee. (We suspect there was no actual Rules Committee vote, since they have not been able to give us a roll call.)
But as the evening progressed toward midnight, the leadership still didn’t bring up the bill for the final vote. We thought we had made it!

Then at 11:57 pm the GOP (!) Minority Leader, Bruce Tarr, made a motion to extend the session until 12:15 a.m! They took a short recess and came back at 12:01. The chairman, Senate President Karen Spilka, immediately brought up Bill H4664. But the horrible section that the House had taken out was added back in, and the result was named S2641.
Normally, the final vote for Bill S2641 would need to be voted on a different day. The chairman asked if there was any objection for the rules be suspended so they could vote on it now. No one objected, not even the Republicans!

Debate commenced. The bill’s sponsor, Rules Committee Chairman Mark Montigny, gave a rambling, angry, rather incoherent speech quoting Peter Sprigg of the Family Research Council about homosexuality! It had nothing to do with the bill, but was meant to demean conservatives.

Unfortunately, all of the so-called “pro-family” Senators completely caved in. Not a single one spoke against the bill. There was no more debate. The Senate President then did a fast voice vote with no discernable yeas or nays and declared the bill passed. No Republican called for a roll call vote (which they easily could have done). Minutes later, the session ended.

A non-victory for the liberals

But it was not a victory. The House and Senate had passed two different bills. The House had already adjourned. There was no time to send it back for a vote there, or send it to a conference committee.

Had they done all this a few days before, or a week before, it would have been possible. But for some reason – we think it had a lot to do with the MassResistance pressure they were getting from the public – they chose not to do that.

We still have to be on top of this. Although the LGBT activists have admitted defeat in the press, there are some sleazy and even illegal tactics that are often used to slither legislation through after the formal session ends.

For example, between now and the end of 2018 there are twice-weekly “informal” sessions of the House and Senate where as little as 2 members (at least one Democrat and one Republican) vote on so-called “non-controversial” matters. They could try to push it through one of those. But just one member can stop the process. We will be watching closely.

Lessons learned? Basically, combatting the LGBT movement requires hardball tactics. These people are obsessed and don’t care about your children or anything else. Conservatives need to step up their game or be rolled over.

For the time being, however, MassResistance can claim a substantial victory against the LGBT lobby in one of the most LGBT-friendly states in the country!
Posted by Arthur Christopher Schaper at 9:23 PM