Let's just say that Sarah Jeoung, the latest hire to the New York Times, has a racist past.


Meet the newest member of the New York Times editorial board.

I'd say that these tweets were part of her resumè when she applied for the job. pic.twitter.com/CLgFvPeAgM
— Garbage Human 🗑 (@GarbageHuman_) August 2, 2018

Check out the other hate below:

1) white men are bullshit
2) no one cares about women
3) you can threaten anyone on the internet except cops
— sarah jeong (@sarahjeong) January 1, 2015


.@RepDanMode White people have stopped breeding. You'll all go extinct soon.  This was my plan all along. 😈
— sarah jeong (@sarahjeong) August 16, 2014


Before we go to bed: remember Mike Brown was wrongfully murdered in broad daylight. It all starts there. Fuck these racialized distractions.
— sarah jeong (@sarahjeong) August 16, 2014

Wrong. The police reports, the grand jury testimony from the Ferguson, Missouri shooting all established that Brown was a thug who had robbed a convenience store, then rushed at a police officer, who had every right to shoot him to defend himself.

This woman is a full-on illicit hack. How can the New York Times consider this person. Putting aside her record of racist rhetoric, the fact that she ran with such a blatant lie, that only should have disqualified her from any high-profile journalism career.

Of course, we are talking about the New York Times, where they print "All the News that Fits Their Narrative."

Instead of reassessing their decision to hire this hateful ... (fill in blank here), the New York Times issued a very tired, unbelievable press release to cover their a..actions:

We hired Sarah Jeong because of the exceptional work she has done covering the internet and technology at a range of respected publications.

Her journalism and the fact that she is a young Asian woman have made her a subject of frequent online harassment. For a period of time she responded to that harassment by imitating the rhetoric of her harassers. She sees now that this approach only served to feed the vitriol that we too often see on social media. She regrets it, and The Times does not condone it.

Really? Jeong issued her tweets on their own, not in response or in parody to online attacks which she had endured.

She wants to play victim, all the while victimizing white people.

We had candid conversations with Sarah as part of our thorough vetting process, which included a review of her social media history. She understands that this type of rhetoric is not acceptable at The Times and we are confident that she will be an important voice for the editorial board moving forward.

The New York Times claimed that they had "candid conversations" with their new star editor. They probably should have written "canned," since no one takes the corrupt New York Times seriously.

As expected, Jeong spliced out private messages directed at her and played victim:


As a woman of color on the internet, I have faced torrents of online hate, often along this vein: I engaged in what I thought of at the time of counter-trolling. While it was intended as satire, I deeply regret that I mimicked the language of my harassers. These comments were not aimed at a general audience, because general audiences do not engage in harassment campaigns. I can understand how hurtful these posts are out of context, and would not do it again.
These comments were responses to her hate.

But she can't argue that she was merely "responding." 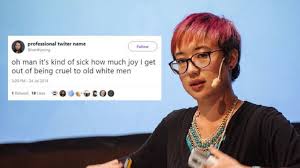 Furthermore, her anti-white racist comments were directed at all white people. She could have targeted her smarmy retorts at those individuals and left it at that.

On top of that, she demonstrated a disturbing lack of maturity in her social media profile four years ago, and continued to do so. Such a lack of judgment should give any publishing house pause.