When Cowardice Swallows Up Courage: Local Resident Tells Activist Not to Help with Recall Gascon Effort

No matter what your partisan affiliation, you should be committed to recalling George Gascon, the corrupt, pro-criminal district attorney of Los Angeles County.

The Torrance City Council has gone on record to have this man removed. The Palmdale city council said "Fire this man." Cities like Pico Rivera and Santa Fe Springs have gone on record stating resolutions of No Confidence in George Gascon.

And as I write this post, residents in Downey, CA are demanding that the city council also go on record against this man.

Well, there was an event scheduled today (August 18, 2021) in Manhattan Beach to start collecting signatures to recall George Gacson: 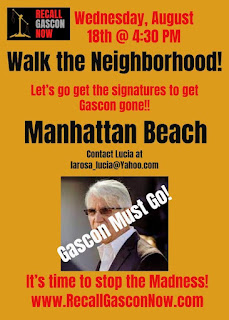 I reached out to the person on the email address: larosa_lucia@yahoo.com

I informed her that I wanted to help out.

This was the answer I received:

Thank you Arthur but I do not believe this is a good idea and I am against this. I want to keep this event non political and you are a very political figure. Your presence will boycott this event and stir the pot and give ammunitions to people who already depict us as partisan. Also this is not a Recall Gascon Now event - I do believe Recall George Gascon and Recall Gascon Now must cooperate and this is why I told ----- and I am happy to do this as something both campaigns volunteers do - but this is a Recall George Gascon event. While I do have conservative values, I have a standing as non partisan and I want to maintain it - if you come, or any other person associated with the Republican Party come, I will cancel this event at once.

First of all, anyone who is collecting signatures to recall an elected official is engaging in political activism. More people in the state of California need to be doing this.

She then assumes that if people are registered Republicans or otherwise, that somehow mars the effort. Crime affects everyone, regardless of their partisan affiliation. The bad district attorney who is ruining our county and undermining public safety is hurting everyone. Democrats, Republicans, Independents have all come out of their homes and onto the streets to fight this guy and get him removed from office.

It's time to get past political parties as an excuse not to work with others. I support registered Democrat LA County Sheriff Alex Villanueva. I also think LA City Councilman Joe Buscaino (a registered Democrat) has a better plan for Los Angeles as the next mayor for the city.

I am looking for people with good ideas and a heart for the needs of the residents of Los Angeles County.

Shouldn't the focus be on helping get rid of a corrupt, evil DA who only wants to protect criminals? This is beyond outrageous!

I would advise staying away from people like Lucia, who care more about division and pre-eminence, and who do not care about doing what is best for the community.

Let's get this done!

Posted by Arthur Christopher Schaper at 8:27 AM