There are LGBT militants, even in the city of Torrance. The Balanced City is working hard on balancing itself through hard times, especially because of the corruption that has become endemic in Washington DC and Sacramento.

This time, another LGBT bigot named Jenna, a (thankfully former) Torrance resident who ran away to hide in Santa Barbara.

She seems to think it's OK to push sexual perversion on children. This hatred is evident because she opposes MassResistance.

She also hates Jews, since she is so pro-Palestinian, even though there is no such thing as Palestine. She thinks that terrorism is OK since she wants to abolish ICE and the police. What kind of bigoted madness is this, especially when the vast majority of black and Hispanic people ("people of color") want the police in their neighborhoods and want them well-funded to serve and protect their communities? 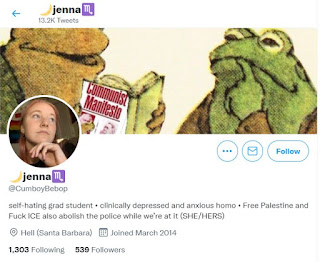 She is a childish communist, for starters. Who would think that putting "Communist Manifesto" in the same frame with children's book characters Frog and Toad would even make sense?

She calls herself (?) a "self-hating graduate student." Self-loathing is very common on the left, especially because they see it as a form of virtue. It certain sounds like a classic case of mental illness.

And she's a graduate student in Santa Barbara. Is she being UC Tuition to be a grad student? And in what subject, exactly? That alone would set a person up for major depression.

And lo and behold, look what she wrote next on her Twitter profile:

She has mental health issues, but she finds time to defame men and women who want to protect children and the general public from destructive LGBT perversion. Really.

For the record, individuals who fall into unnatural affection, i.e. "homo" are going to struggle with mental health issues of all kinds. No one should be surprised.

And it gets worse from there.

Check out her hate against me, for starters:

@ Torrance friends, Arthur Schaper, violent local racist and homophobe is trying to get on city council, PLEASE email our city council public comment and let them know that Torrance will not be safe for all citizens if Arthur Schaper is in a position of power!!! pic.twitter.com/JBHiDvrisC

She thinks that standing up for children and against sexual perversion is hate. No wonder she is self-loathing.
And then check out her "comeback":

And yes, her Twitter handle is "Cumboy Bebop." Seriously.

Without the profile, anyone could have figured out that she was mentally ill.

Since when is "ableist" a thing? This is nonsense. All of this intersectionality garbage covers up for someone who is needy, bitter, and angry--nothing more.

Why is that people are so desperate to identify themselves as victims? It's really quite sad.

Bigots like Jenna are nothing but unemployed, over-wrought hate-mongers who have a problem with people who do not look like them. By her own admission, she has mental health issues. She probably should not be out in public, let alone in civilized society as a whole.

It's good that she no longer lives in the city of Torrance. Such bigotry, she hate, such white supremacy has no place in the South Bay.