Do Not Comply: Torrance Residents Attend School Board Meeting Without Masks, Board Can't Stop Them

This weekend, Dr. Rand Paul declared to the public: Do Not Comply.

Check out his full statement here:

We are at a moment of truth and a crossroads. Will we allow these people to use fear and propaganda to do further harm to our society, economy, and children?

Or will we stand together and say, absolutely not. Not this time. I choose freedom. pic.twitter.com/XrI2tjdAHW

The COVID-19 restrictions have been going on for a year and a half now. A number of states have rolled back the mandates and the restrictions. Some state legislatures have gone so far as to curtail the emergency powers of their governors, in red and blue states!

However, some more authoritarian regions of the United States, like the state of California, and specifically Los Angeles County, are determined to ratchet up and reimpose the mandates, the orders, and very likely the lockdowns.

This is madness. This is truly shameful. The COVID-19 strains have no more serious impact on a person than the common flu. I have not gotten the flu in years. Only one serious bout hit me in 2019, and even then I was back up and working within two weeks. Yes, it's bad, but what's worse is allowing government tyranny and relentless bureaucratic bullying.

In the words of Neil Oliver: "I choose freedom."

Besides, the latest research does not support these renewed measures. People should not wear masks. Not only that, but the people catching COVID-19 right now are people who have already received the vaccine! It's time for people to stop giving into fear and to stand for truth in faith! 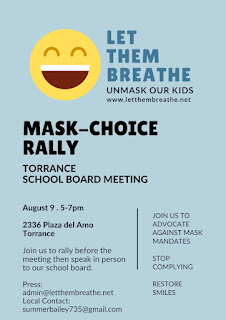 So, on August 8th, 2021, a group of parents organized a protest in front of Torrance High School (my alma mater!). Parents and children showed up to speak out against the ongoing mask mandates, especially in the public schools.

The turnout was great! 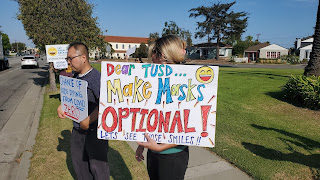 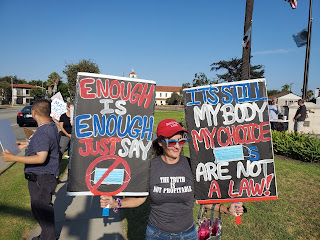 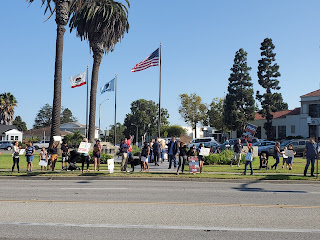 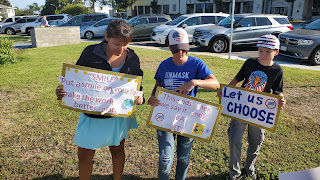 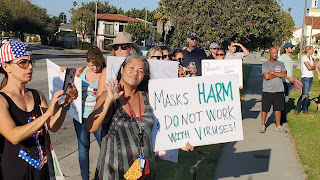 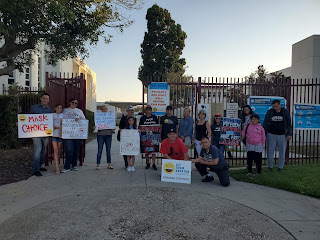 Lots of people showed up to support us, and lots of cars were honking along Carson St. Two ladies who were walking their dogs in the area saw our protests, too, and they were so grateful. One of them returned later that evening to join us at the Torrance school board meeting.
Pastor Derrick Gates also arrived on scene. He was so happy to have the chance to support as many parents and residents as possible who want to stop these unconstitutional, unhealthy, immoral mandates. Check out his comments here. 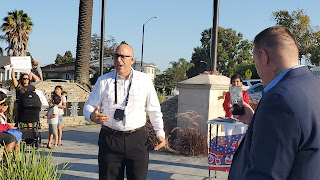 Sam Gallucci, a gubernatorial candidate, also showed up to show his support for the parents. Check out his comments here.

The Torrance school board moved their meeting to the Torrance High School auditorium, as they anticipated a larger audience.

And indeed, we were a larger movement committed to pushing back on this.

All of us lined up outside of the Torrance High School main assembly hall, an Art Deco structure built in the 1920s. Two security staff stood outside, telling us all to put on our masks in order to enter the building.

All of us refused to do so. The security personnel asked us a second time to put on our masks, and we refused. One of them threatened us: "All right, then I will ask the police to remove you."

Instead of letting the school staffers bully us, we walked into the auditorium to find our seats: 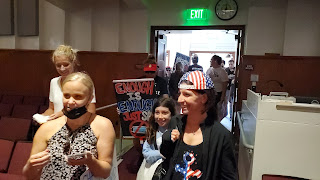 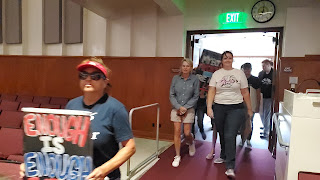 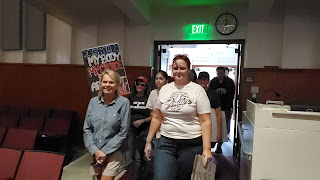 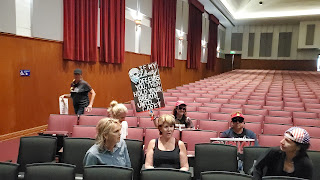 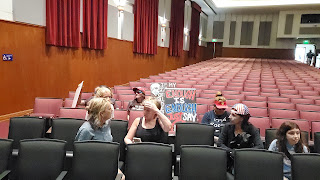 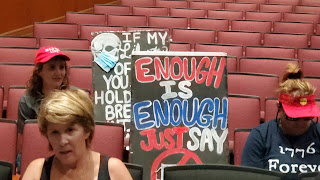 Once we all got settled in, Dr. Keith Butler, the chief academic officer, reminded us that there is a health order (which is unlawful and unconstitutional) and that we needed to put our masks on. We told him that we are not going to comply with that unfounded, unlawful order. 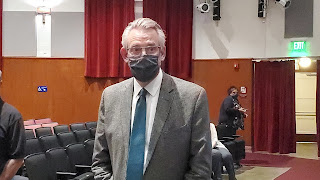 He was not pleased! He stormed up the aisle to the front lobby of the auditorium to speak with the school security and Torrance Police Officers who were on duty at the time.

Here the school security and the chief academic officer are trying to collaborate with the two police officers on duty to remove law-abiding citizens: 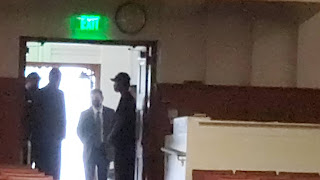 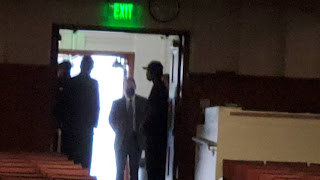 NOTHING HAPPENED. The police did not follow the unlawful directives of the school board, because they were trying to push the unlawful health orders from the Los Angeles County Department of Health.

Barbara Ferrer is not our king, and neither is the LA County Board of Supervisors!

We won! We the People pushed back. We followed the encouragement of Dr. Rand Paul and we refused to comply with these ridiculous health directives! 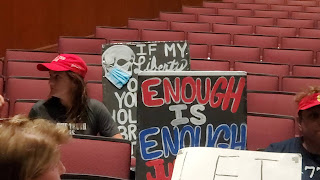 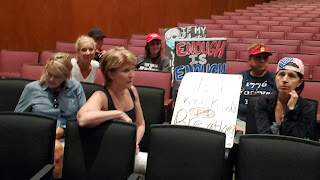 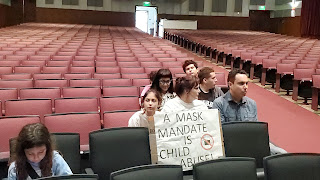 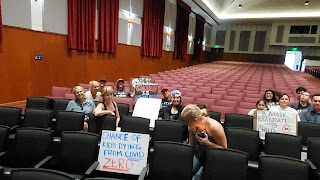 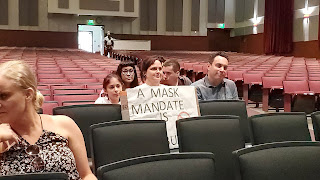 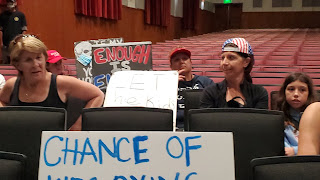 It felt good to push back on this lawless tyranny! 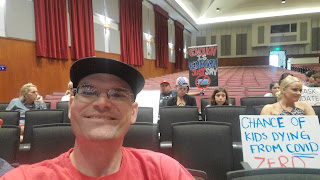 Let's just say that the school board was not too happy with us that day! A number of times during the first few announcements, they tried to shame us and intimidate us. The presiding school board member, Betty Lieu, said that we were risking the school district entering into legal liability.

We were not moved and we refused to be intimidated.

It was kind of funny to hear the school board members and senior administrative staff talk about the imposed mask mandates in the schools, when the audience in front of them knew the truth and acted on it: we refused to comply! It was so funny. Check out their preliminary remarks here.

Finally, public comment began, and every person who spoke out, whether at the dias or via Zoom, condemned the school board's decision to continue with the mask mandates.

Summer helped organized the "Let Them Breathe" Rally.
Raphael invited me to come. I spoke after him.
Check out our remarks here.
Someone cut a great video with our remarks, including great sound effects. Check out that video here.
Then came Aaron, another parent in the city of Torrance: 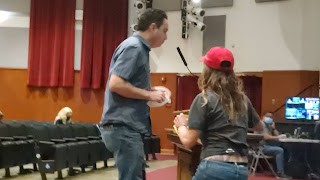 An awesome young lady named Alexa spoke out against the mandates, too. She came armed with facts and figures, as well as her own experience. She did a GREAT JOB! Check out her statement here. 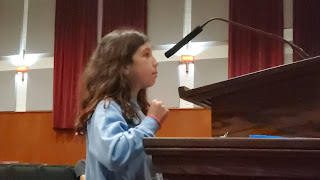 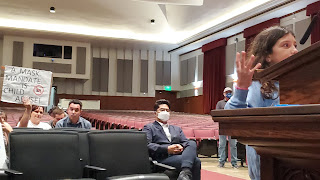 And this awesome lady came armed with a great deal of research, too! Here are her comments. What was really irritating at this point, however, was that Board Member Betty Lieu demanded her first and last name. That is a violation of the Brown Act. No one is required to list or record their name for the record at the podium or anywhere else in order to address the city council. 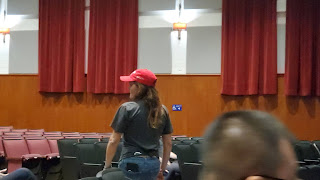 At the podium, I told the board that I would be urging parents to send their kids to school without masks. The school board cannot, the schools cannot suspend students just for mere "defiance." A new wrinkle in the California Education Code severely limited school authority on this matter. 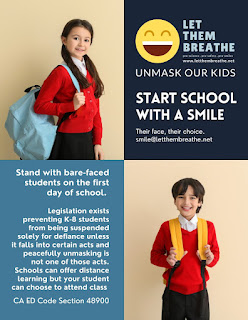 It's time for parents to fortify their children to rebel against these outrageous mandates!
Final Reflection
We did it!
Residents, parents, citizens in the city of Torrance didn't just stand on the street, hold a rally, and protest. We fought back against these unconstitutional, lawless mandates in our own city, before our own governing board which works for We the People, and WE WON!
We need more people to share this story. We need more parents, more outraged citizens of all backgrounds to push back against this madness and DO NOT COMPLY.
It's great to hold a rally.
It's great to protest.
It's great to speak out against lawless behavior and unruly politicians.
It's nice to post pictures, posts, and memes.
But what is needed now more than ever is action, proper, concentrated civil disobedience.
And WE DID IT!
Posted by Arthur Christopher Schaper at 8:00 AM