Last month, the Torrance City Council voted to move forward on a terrible idea to raise the sales tax in the city. Yes, the city is facing some severe economic headwinds, but raising the sales tax is not going to ensure that there is an actual increase in revenue.

Sales are already down right now in a number of businesses throughout the city, including the Del Amo Fashion Center, precisely because so many people are struggling to get out of the COVID-19 pandemic.

But as business reopens, as businesses reopen around the city and throughout the state, economic growth will recover. There is no reason for the city to dampen economic recovery with an increased sales tax.

An informal survery was taken online recent, specifically in the Seaside section of the city of Torrance. Here are the results: 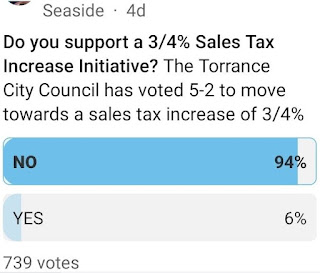 A staggering 94% said NO to a sales tax increase.

This sample size is bigger than the sample size sought by the consultants hired by the city of Torrance to look into floating a sales tax increase.

The city would have to spend another $400,000 to have the measure on the ballot, and they are already looking to spend money on a consultant to determine whether they should go through with this initiative in the first place.

The city council and staff need to find other ways to save money while holding onto core services. Why not privatize the garbage collection service? How about dealing with the lingering, staggering pension issues which are still hurting the city?

There are plenty of cost-saving measures which the city of Torrance should consider. Raising taxes on the residents is NOT one of them.

Contact the Torrance City Council, and make it very clear to them: