Neil Oliver Blasts Covid Lockdowns: "To be alive is not enough. What matters is to live in freedom."

Check out Neil Oliver of Scotland taking on the COVID-19 tyranny in Great Britian!

Neil Oliver: 'For the sake of freedom – yours and mine together – I will cheerfully risk catching Covid.'

For me, it’s all and only about freedom. For me without freedom, there is no point in anything. So, take away all the numbers, all the statistics, all the models and predictions, all the promises and threats; all the steel hand in velvet glove coercion. Take all of that away. To me it all boils down into something simple.

I declare that I am a free man.

I was born 54 years ago into part of the world, just a relatively small part of the world, but I was taught that my freedom had been won for me by men and women who had fought and died to make it so. I was born just 22 years after World War II into a world, still full of those men and women who had fought for my freedom and lived to tell the tale and what a tale it was. It started with the sudden appearance of a force bent on tyranny. Of course, the sudden appearance was an optical illusion. In truth that force had been on the rise and making plans for years before it was ready to pull the trigger. It’s worth remembering that that force believed it was poised to make the world a better place. A glorious place. When that force started moving it seemed nothing could or would stop it. In the beginning of the fight to prevent the victory of that tyranny it was a minority -a minority outgunned and shouted down by fellow citizens- who feared that deals might be struck with tyranny, that stood up and shouted no. English writer Mervyn Peake said “To live at all is miracle enough.” It’s a good line and I’ve quoted it for years, but now I see merely to live at all is not enough, not nearly. A caged bird is alive but without the freedom to fly the Limitless sky, it is denied everything that makes a bird in the first place. To be alive is not enough. What matters is to live in freedom. A bird is such a fragile creature. It’s really all and only about movement. Take away a bird’s movement and it’s a handful of feathers and air.

Freedom is not negotiable. You’re either free or you’re not. Freedom is not even safe. Those who’ve been imprisoned are often terrified of freedom. All those choices, for all of our personal responsibility. This is why ex-cons often reoffend, to go back behind bars where it feels safer, out of harm’s way. I have three children. Teenagers all. Often, I think I would like to keep them close by me forever, where I can stop them doing stupid things. Dangerous things. If I kept them in the house no stranger would hurt them, but that would be no life. Not for them and not even for me. I would be their jailer and they would be my caged birds. As it happens, this past year-and-a-half has let me see what happens to children kept safe in the house. It’s not good, not good at all. And so if I didn’t know it before, I know now that I have to let them go into a world that is full of all manner of things, danger included.

Here’s the thing is, if your freedom means that I might catch COVID from you, then so be it. If my freedom means you might catch COVID from me then so be it. That’s honestly how I see it. For the sake of freedom…I will cheerfully risk catching COVID. That is a chance. One among many that I am prepared to take and happily. Life is not safe; freedom is not safe. For the sake of freedom, yours and mine together, both freedoms being of equal value, I will cheerfully risk much else besides. 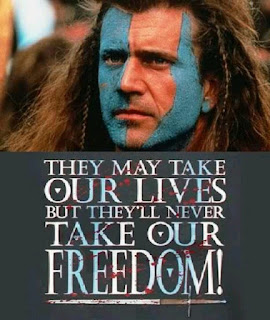 We ALL need to make his Braveheart Declaration:
"They may take our lives, but they will never take our freedom!" -- William Wallace
Posted by Arthur Christopher Schaper at 7:45 AM