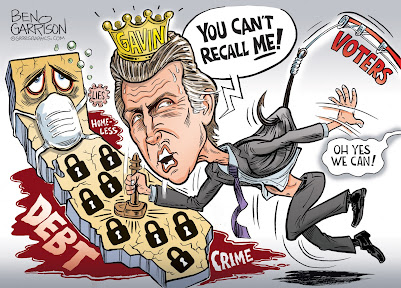 Kevin Faulconer, 54, is the Republican former mayor of mostly Democratic San Diego. He supported immigration reform, believed in climate change and distanced himself from former President Donald Trump, until voting for him in 2020.

Ted Gaines, 63, of Shingle Springs, is a Republican former state senator and Assemblymember who is now on the California State Board of Equalization, which oversees taxes and fee collection.'

Jeff Hewitt has been a Riverside County supervisor since 2018. Before that, the 68-year-old hero to Libertarians nationwide was mayor of Calimesa after serving as a City Council member.

Kevin Kiley is a Republican assemblymember from Rocklin. The 36-year-old former deputy attorney general and former teacher made headlines by suing Newsom over pandemic executive orders.

Doug Ose, a 66-year old Republican, is a former Sacramento-area U.S. representative whose 2018 campaign for governor failed to gain traction.

Angelyne is a “‘billboard icon” of Los Angeles, spotted around Southern California in her signature pink Corvette. Now 70, she has tried to keep an aura of mystery, and changed her legal name to AngelLyne Lynne. She is running without a party preference.

Larry Elder, 69, is running as a Republican. The talk radio host is a frequent guest on Fox News and spoke out in support of former President Trump. Trained as an attorney, Elder wrote a conservative newspaper column for several years and has authored books arguing against liberal views on racism.

BRUCE Jenner, 71, a Republican, first came to prominence as an Olympic gold medalist in 1976. She was once married to Kris Jenner — mother of the Kardashian sisters, the reality TV stars — before becoming one of the most prominent public figures to transition.

Kevin Paffrath is a real estate broker and investor from Ventura. The 29-year-old Democrat has 1.7 million subscribers to his YouTube channel on the housing market, real estate and the stock market.

John Cox, 66, is a self-proclaimed anti-politician from the San Diego area who has run for U.S. Congress, U.S. Senate and the presidency as a Republican and who lost to Newsom in 2018. This time, he’s campaigning with a live bear and a ball of trash. He has already put in $5 million from his own wallet.

Jenny Rae Le Roux, 40, is a business owner from Redding and former Bain consultant who describes herself as a ‘Republican, pro-business fiscal conservative.” Le Roux has contributed $100,000 to her campaign.

Anthony D. Trimino, from Ladera Ranch, is the owner of a marketing and advertising agency. The 45-year old Republican has put $50,000 into his campaign.

Leo S. Zacky, 29, of Los Angeles, was the vice president of Zacky Farms, a family-owned poultry business that closed in 2018. The Republican loaned his campaign $25,000.

Chauncey S. “Slim” Killens, a 63-year-old associate pastor from Hemet, is running as a Republican. Killens, a Trump supporter, attended the Jan. 6 U.S. Capitol riot, but spoke against the violence.

Sarah L. Stephens, 39, is a pastor from Riverside County running as a Republican. She has helped organize events such as the “Redeeming America” tour, seeking to unite businesses to reopen during the pandemic.

Nickolas Wildstar, 39, of Fresno, is a Libertarian activist running as a Republican. A digital marketer and a rapper, Wildstar ran unsuccessfully for governor in 2018 and city council and mayor in Orange County, where he recently lived.

Michael A. Loebs, a 39-year-old lecturer in political science at San Francisco State University, is running with no party preference. He is an organizer with the California National Party, which advocates for secession from the U.S. and policies including universal basic income and single-payer health care.

Joel A. Ventresca, 69, of San Francisco, worked for the city and county of San Francisco on the aging and airport commissions. He lost bids for city treasurer in 1997and for mayor in 2019. Ventresca, a Democrat, was on the executive committee of the Services Employees International Union.

Holly L. Baade, 48, is a spiritual teacher and coach. A Democrat who lives in Fairfax, Baade is also a former journalist.

David A. Bramante is a real estate agent and housing developer from Calabasas. The 39-year-old Republican hosts a podcast on artificial intelligence.

Heather WJ Collins, 61, is a Playa Del Rey resident and hairstylist running with the Green Party.

John R. Drake from Ventura, is running as a “progressive Democrat.” At 20, he is the youngest candidate to file a statement of intention to run.

Rhonda D. Furin, a 56-year-old Republican from Anaheim, is a retired teacher running on a platform to reform education.

Sam L. Gallucci, 62, of Oxnard, is a software developer and pastor. The Republican candidate founded ministries to help at-risk women and children, as well as migrant field workers.

James G. Hanink, 75, of Inglewood, was a philosophy professor at Loyola Marymount University and is a member of the American Solidarity Party, which ​​seeks to promote Christian values.

David Hillberg, 61, is an aircraft mechanic and actor from Fountain Valley. He is running as a Republican.

Daniel I. Kapelovitz is a 50-year-old criminal defense attorney in Los Angeles and a Green Party candidate.

Kevin K. Kaul, 59, of Long Beach, is running without a party preference and is the founder of the U.S. Global Business Forum, which fosters trade between the U.S. and the rest of the world.

Patrick Kilpatrick, 71, is an actor, screenwriter and producer from Los Angeles. He is running as a Democrat.

Steve Chavez Lodge, 63, is a former police detective and police commissioner who owns a safety consulting firm. A Republican who lives in Trabuco Canyon, he is engaged to “Real Housewives of Orange County” star Vicki Gunvalson.

David Lozano, 63, a San Marino Republican, is a former deputy sheriff and an attorney who lost a bid for Congress in 2020.

Denis P. Lucey, is a 61-year-old teacher from Santa Rosa running with no party preference.

Jeremiah E. Marciniak, 42, of Lincoln, owns a rental and car sales business and is running without a party preference.

Diego J. Martinez, a 45-year-old Republican from San Andreas, was general manager of an auto dealership and now runs a bail bond business.

Jacqueline McGowan, 47, of Napa, is a Democrat and a cannabis advocate who says Newsom has imposed too many regulations on legal marijuana. She says she’s running to “facilitate a fair cannabis market.”

Daniel R. Mercuri is co-CEO of an independent production company, co-partner of a private investment company and a Navy veteran. The 43-year-old Simi Valley Republican ran in a 2020 congressional special election.

David Moore, a 34-year-old public school teacher from Emeryville, is running with no party preference. He was the Socialist Equality Party’s candidate for the U.S. Senate in 2018.

Adam Papagan, 33, is based in Los Angeles, where he leads tours of celebrity homes. He is running without a party preference because he is curious about how the government works.

Dennis Richter, 72, of Los Angeles, works at Walmart and is the Socialist Workers Party candidate for governor. He also ran for Los Angeles mayor in 2017.

Brandon M. Ross, 49, is a Democrat from La Mesa. A doctor, he says he’s running to inspire drug addicts that they can turn their lives around — as he did after getting hooked on opiates and then recovering.

Major Singh, a software engineer, is running with no party preference.

Denver Stoner, 47, a Murphys resident and a deputy sheriff, is running as a Republican.

Joe M. Symmon, 71, of Orange, is a Republican who ran for governor as a Democrat in 2010. He is the founder of Faith Champions Church.

Daniel Thomas Watts, 39, is a Democrat from Vista. A lawyer who specializes in First Amendment cases, he ran for governor in the 2003 recall when he was a college student.