This news is nothing short of incredible.

John Cox was seen as a nonentity who didn't have a chance after the June primary. Granted, pundits and activists across the country recognized that we need a Republican at the top of the ticket who would ensure a higher turnout across the state and help the down-ticket candidates.

Cox seems to have been MIA for a while.

Hopefully, this is going to change, and with good reason.

The latest polling indicates that many voters are still undecided about Gavin Newsom, and Cox is gaining ground!

SACRAMENTO — A newly released research poll from Opinion Research on Elections and Public Policy shows Republican John Cox is closing the gap between himself and Democrat Gavin Newsom in the race for California’s next Governor.

This is really good news. Who would have thought that this could be done?

Nine-hundred voters participated in the survey between August 29 and September 2.

The results show Newsom at 44 percent, Cox at 39 percent and 17 percent of voters are unsure.

With such a large share of undecided voters, there is a growing change for swing into action and win this fight. The Republican Governors Association is pledging money to help Cox as well as other Republican candidates in otherwise blue states.

The survey also shows Cox is well outperforming his GOP base – fewer than 25 percent of of California voters – and captures a similar percentage of the Latino voters as Newsom.

The two candidates are getting an equal share of the Hispanic vote at this time! 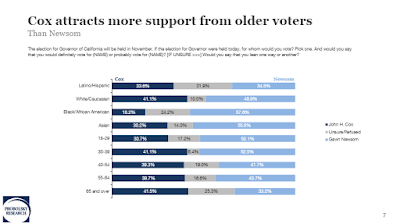 The election for Governor of California will be held on November 6. The winner will assume office on January 7, 2019.

This can be done.

We need everyone to put aside their bitterness and vote for John Cox for Governor. 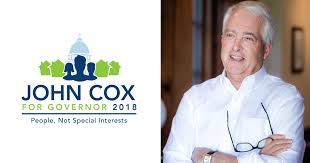