We don’t know about you, but we are definitely excited for the upcoming days when Supreme Court Justice Brett Kavanaugh singlehandedly overturns Roe v. Wade, causes more global warming to happen and places a fully-automatic machine gun in the hands of every middle schooler.

Quick question: If one Supreme Court Justice has as much magical power as the left ascribes to Brett Kavanaugh, why hasn’t Ruth Bader Ginsburg incinerated all of us Deplorables already?

The Senate confirmation hearings for Judge Kavanaugh were a sight to behold this week. Deranged lunatics were screeching, howling and bursting into tears in the Senate Judiciary Committee at the inevitability of Kavanaugh’s confirmation. Those insane people shrieked almost continually and at times, it felt like the hearings were going to have to be canceled just for safety’s sake.

Oh, and some civilian protesters showed up, too.
The mainstream media was sure to let us know that there were women on the balcony overlooking the chambers who were dressed in Handmaid’s Tale costumes. Look at all of those ordinary, concerned female citizens turning out to stand up for Roe v. Wade! Why, they’re a veritable plethora of everyday Americans, declared the MSM.

Except… later on in the day, conservative outlets identified them as members of the DC-area Antifa fugly squad. Trust us, those brand-new scarlet and white costumes are the cleanest clothes those “ladies” have had on since November 8, 2016.
Plus, we didn’t know that handmaids are allowed to use cell phones. Paging the Patriarchy Police!

Within the Senate chambers, it was an absolute zoo. The Democrats were howling and screeching like a pack of… oops, we almost said, “monkeys,” but thanks to the media’s coverage of the Florida primaries, we know that monkey is now the new N-word. Let’s just say the Democrat protesters were out of control.

Don’t think, however, that it wasn’t planned that way. Sen. Chuck Schumer (D-NY) gave the Democrat Senators and the civilian protesters their marching orders in a conference call last week. The whole charade was carefully orchestrated, right down to a George Soros-funded leftwing organization paying the protesters from a bag of cash, right outside the Senate building.

Three doctors who were waiting in line, in hopes of getting inside to watch some of the proceedings, saw a dude with a bag of cash handing out money to people. They thought that was weird, so they snapped a photo of the money-man. Sure enough, the woman he was handing cash to was later ejected from the hearing for howling like a… can we say “banshee?” Is the word “banshee” still okay? Can we get a ruling on that?

The Center for Popular Democracy is almost completely funded by Soros. Thus, the protests that you saw on TV at the Kavanaugh hearings were brought you by George Soros. Thanks, George.

Here’s a fun fact that Mitch McConnell could take advantage of to ensure that such a circus never happens in the US Senate again. You can’t get into a Senate hearing unless you have a pass. You don’t get a pass unless a Senator’s office gives you one.

In other words, every single one of those insane, screaming, howling lunatics (you thought we were going to say banshees again, didn’t you?) was given a pass by a Democrat Senator.

Mitch McConnell could simply change the Senate rules to fix this once and for all. If you have a guest in the Senate chambers that has to be ejected for too much crazy, your office gets no more passes. Period. Problem solved.

And you know it just wouldn’t be an anti-Trump media spectacle without a loony tunes conspiracy theory about white supremacy. Boy, did the Democrats deliver on that promise! One of Judge Kavanaugh’s advisors was seated directly behind him, and she was… OMG, she was flashing a white supremacy hand signal to the cameras for like, totally an hour!

Of course, that conspiracy theory fell apart when it was revealed that the perceived KKK lady was Zina Bash, a Jewish-Mexican staffer of Kavanaugh’s.

Our favorite part of the hearing, however, had to be when Sen. Cory Booker (D-NJ) had his moment in the shining sun, pulling a campaign stunt to indicate that he’s running against Trump in 2020. “This is my Spartacus moment!” Booker thundered to the cameras. 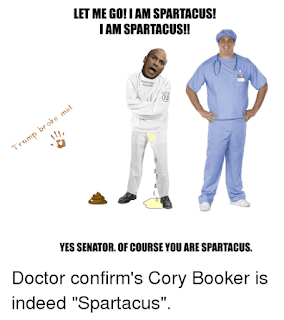 Oh, boy. Anytime a Democrat tells you how courageous they’re being, get ready to be informed of something banal that doesn’t even vaguely resemble courage to a normal person.

Remember, the Democrats thought that FBI stooge Peter Strzok deserved a Purple Heart for testifying before the House Judiciary Committee – which is part of the regular duties of senior FBI officials. “He’s doing his job! It’s just like being shot by the Taliban!”

Courage to a Democrat usually means making it halfway through a meeting before sending out a fundraising email about how brave they’re being.

Okay, Spartacus Booker! Dazzle us with your courage! We’re ready to swoon!

Booker declared that he was breaking the Senate rules to release classified Kavanaugh documents that Trump doesn’t want the public to see. And even though SPARTACUS BOOKER could lose his US Senate seat for misconduct by BREAKING THE RULES IN REBELLIOUS FASHION, JUST LIKE HEROES FROM DAYS OF YORE (!), he was willing to make that sacrifice for America. That’s how brave SPARTACUS BOOKER is!

Except the documents had already been declassified before the hearing started. It was a nice speech, though, Spartacus. ‘A’ for effort.

So, in the end, Spartacus Booker’s big rebellion revealed to the world that Brett Kavanaugh is opposed to racial profiling. You’d think the Democrats would have wanted to hide that.

This was a watershed moment though, because up until we saw the documents, we were unable to learn any of Kavanaugh’s positions on any legal issues. That’s because Kamala Harris and Dianne Feinstein had been interrupting him for two straight days.

As for Kavanaugh’s real worth as a US Supreme Court Justice, if he’s even 10 percent as conservative as the Democrats and the media assure us he is, it’ll be an improvement over Anthony Kennedy.