Towards the end of the Obama Rally, which was more like a sad therapy sessions for the desperate California Democratic Party.

Their actual turnout numbers were pretty weak considering what they hoped to bring into the California primary.

They have weak or unknown candidates, many of whom met with Barack Obama in Orange County because they feared his presence in their home districts, where he is simply not that popular.

On top of that, there was a small turnout: 750 to 900, depending on which reporter tells you what.

One of the reporters on scene was reporting for the Washington Post. Some of the member of our Trump team did not want to talk to him. Fortunately, he came back and spoke to the rest of us. We all had something we wanted to say. 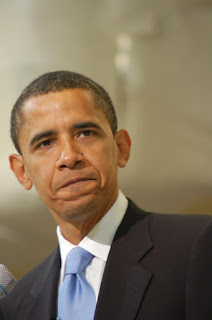 No, he is not the biggest star. He barely encountered 750 people at this rally. The Anaheim Convention Center had to move the meeting from a large ballroom for 5,000 to a side room for a much smaller number.

The event came nearly 20 months after Obama left the White House and committed himself to withdrawing from the daily political debate in the tradition of presidents past. In recent days, however, he has made clear that he can no longer remain restrained.

Let's cut through the crap here. Obama had no intention of walking away from national politics. He intended to take his Organizing for Action activism machine a step further and continue his efforts to fundamentally transform the country using Saul Alinsky style tactics.

He was never going to go away gently. He has no intention of acting as though he has no power any more. In fact, much of the Deep State today comes from his appointments and micromanaging the massive bureaucracies with his appointees and directives throughout his two terms in office.

“The only way we reverse that cycle of anger and division is when each of us as citizens step up and say we are going to take it upon ourselves to do things differently,” he told a crowd of 900 at the Anaheim Convention Center, his shirt sleeves rolled up his arms. “We’re going to fight for the things that we believe in.”

Obama doesn't believe in much of anything, does he? He didn't mention many of his priorities during that rally, according to videos I had watched of the event.

Unlike the blistering speech he delivered Friday in Illinois, where he compared President Trump to a demagogue and described the current moment as a time of “political darkness,” Obama offered no pointed critiques of his successor — or mention him by name. Instead Obama struck a light note, focused on the biographies of California candidates he was there to help, calling out his love for the crowd three times, and even recounting his childhood visits to nearby Disneyland. 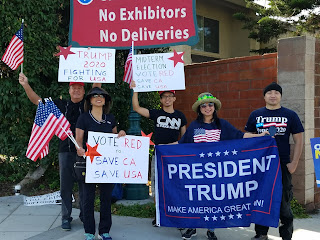 Why? Because going after Trump backfired. Such rhetoric directed at the President fires up the Republican base. Many Democrats right now are not big fans of Obama. The Berniecrats have taken over the California Democratic Party, even if the Hillary-aligned Eric Bauman is the new chairman.

His central message, which he hit repeatedly, was that Americans needed to become more involved in electoral politics. He praised the outpouring of Democratic energy in recent special elections, and called for more.

We are, and that's why Trump got elected. We are involved, which is why more cities throughout the state have opted out of SB 54 and why churches across the state lobbied against the state legislature to stop AB 2943.

“During these times of uncertainty it is always tempting for politicians for their own gain and people in power to see if they can divide people, scapegoat folks, turn them on each other,” he said. “The biggest threat to our democracy, as I said yesterday, is not one individual. It is not one super PAC billionaire. It’s apathy.”

That's what Obama did for eight years. For all his talk about "There is no red America. There is no blue America," he spent a great deal of time propping up the illiberal policies of blue states, which impoverish their residents while corrupting the government. He also spent more time sticking it to the red states, going out of his way to frustrate their political and moral ambitions.

Obama stood on stage with six of the seven California Democrats running in Republican-held districts that Hillary Clinton won in the 2016 election. The state is a central battleground in the Democratic effort to flip 23 Republican seats and retake control of the U.S. House.

Actually, he spent most of the time standing alone on the stage. At the end of his speech, the seven candidates come on stage with him, but they didn't spend much time with Obama. He went right down to the crowds and mingled with the people who came to see "The One.

Vanity is what Barack Obama is all about. He cares about himself, which might explain why a lot of people didn't show up to see him. 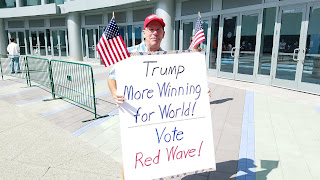 Mike Levin, one of the congressional candidates Obama praised in his talk, said the visit had been a boon for his volunteers and supporters. “This will energize them,” said Levin, who is running in a district that includes parts of Orange and San Diego counties.

What volunteers, though? There were only 750 people there to begin with!

Obama will attend a second rally Thursday in Ohio for Democratic gubernatorial candidate, Richard Cordray, a former Obama appointee. These are Obama’s first public campaign events since he attended rallies for Virginia Gov. Ralph Northam and New Jersey Gov. Phil Murphy in 2017. He has also attended several fundraisers for Democratic efforts, recorded a robo-call for Alabama Sen. Doug Jones and this summer he released his first round of 81 federal and state-level endorsements.

Not many of the candidates in California received an endorsement from Obama. What's the point? Many of his and Alexandria Ocasio-Cortez' endorsements all fell flat, too!

President Trump has so far greeted Obama’s return to politics with a mixture of sarcasm and disdain. Trump initially dismissed the Friday speech as boring. “If that doesn’t get you out to vote for the midterms, nothing will,” he said sarcastically on Friday, while visiting Sioux Falls, S.D.

Obama's speech was not very rousing or engaging. He said some straightforward comments, but there was nothing of his legacy that he could talk about. President Trump has rolled back and eliminated so much of Obama's corrupt, decrepit legacy. This is great news for the vast majority of Americans, many of whom did not think they would see happy, prosperous days ever again. 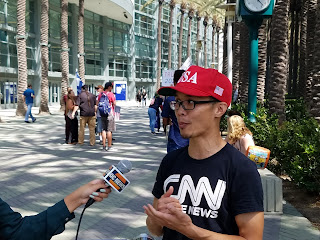 Yes. Very true. How sad, however, that the Washington Post has to rely on President Trump's tweets for information. If they engaged in more honest reporting, they would get more access to the White House and his staffers.

Trump also retweeted a post from Richard Grenell, the U.S. Ambassador to Germany, who noted the Trump administration had recently deported a former Nazi. Obama had criticized Trump for failing to sufficiently condemn Nazis who had marched in Charlottesville, asking, “How hard can that be, saying Nazis are bad?”

Richard Grenell's efforts with the Trump Administration helped to get that done.

The event Saturday in Anaheim was scripted to appeal broadly beyond the activist base, who filled the crowd of hundreds. Two of the speakers before Obama identified themselves as current or former Republicans. Others gave testimonials about the need for protections provided by the Affordable Care Act, also known as Obamacare.

"Filled the crowd of hundreds." Wow. That's what I call initiating some spin, right there.

“The big blue wave starts right here in California,” said Eric C. Bauman, the chair of the state Democratic Party, before offering a fresh twist on Trump’s slogan. “This election is about fixing America again.”

America is already getting fixed. Our economy is stronger, there is more access to work. President Trump is rolling back an incredible number of regulations. He has nominated two Supreme Court Justices, with the second one very likely to join the first confirmed appointment to the highest court in the land very soon.

All of this is very exciting! 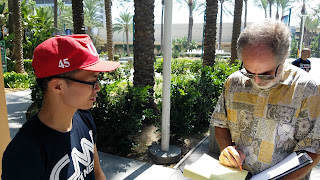 Irvine resident Bob Nicoll, a training manager for a computer game company, was one of the attendees who received a ticket to the event through the Democratic Congressional Campaign Committee.

“We’ve had enough,” he said before Obama spoke. “Truth matters. We all feel mobilized.”

Democratic operatives like this guy would not know the truth if it bit them on the butt. The Democratic Party is not interested in the truth, they are no longer interested in morals, they have a long history of racism (which they are struggling to cover up), and now they are going along with the fantasy of socialism and centralized government.

Barack Obama does not inspire people anymore. The thrill is gone.

A group of about six Trump supporters gathered outside the hall where Obama spoke, including one who only would speak with a Post reporter through a bullhorn, shouting that the reporter was “scum.”

There were 25 Trump supporters total who showed up and counter-protested. We demonstrated our love and enthusiasm for President Trump, too.

After the speech, protester Arthur Schaper said he and other Trump backers are “fed up with lies being said about the president.” A Democratic “blue wave” in November “ain’t going to happen,” he said.

Yes. For once, a major newspaper quoted me accurately and appropriately.

There is a lot of reservation about talking with the press. He had asked me about my affiliation with MassResistance, too, but ultimately did not write about it.

Not that big a deal, but I did record my interaction with the reporter: