The brief yet tense exchange between former New Hampshire Governor John Sununu and CNN Anchor Alisyn Camerota was too much to ignore.

Last month, I faced questions about President Trump from Alisyn Camerota for her "New Day" program. For this segment, she invited the former Governor to talk about John McCain.

And yet, she seemed more interested in talking about Donald Trump.

ALISYN CAMEROTA, CNN ANCHOR: So joining us now to talk about the legacy of John McCain is former New Hampshire Governor John Sununu. He was chief of staff to President George H.W. Bush.

Oh, my gosh, just remembering how much time John McCain invested in New Hampshire and how much he loved the retail politics there and the mixing it up and the stump speeches. You know, Jeff Jacobi, in "The Boston Globe" this morning, calls him New Hampshire's third senator. What are your thoughts?

SUNUNU: That's very accurate. You know, if you're involved in politics at all in New Hampshire, you certainly do get to know at least on some level those who are running for president. And John McCain grew to embrace the style of campaigning that works well in New Hampshire.

The last time I saw him, for any significant amount of time, was when he came up to campaign for Kelly Ayotte in 2016. And we spent a full day -- I was trying to help my son, Chris, who was running for governor, and the four of us spent a full day in a van crossing the state, hitting a number of events. And to listen to John talk in that van about how wonderful his experiences were up here, you knew this was someone that had truly connected with the state. He loved the campaigning, the face to face campaigning. He loved being challenged with questions at the town hall.

It's worth noting that Kelly Ayotte, who had joined herself with the Establishment wing of the GOP along with John McCain and Lindsey Graham, ended up losing her re-election bid in New Hampshire. She refused to support President Trump after the "Grabber Gate" recording hit the public. The candidates running for US Senate who disavowed Trump after those private remarks went public never recovered.

[08:35:07] And as we went from event to event, it was obvious he remembered people at each one of those events from the previous campaigns and loved to chat with them about how they had come together over the years. So he really did embrace the New Hampshire see me, touch me, feel me style of campaigning and grew to love the people that helped him.

CAMEROTA: You're just reminding me of something from the Straight Talk Express. So I was on it -- on the bus with him in 1999. And, you know, I went to many of his stump speeches. So he would sometimes replay his greatest hits, you know, and some of his favorite jokes. And one of them that I'm just reminded of is that he said that he overheard two women in New Hampshire talking after one of his stump speeches and one said to the other, what do you think of Senator McCain? And the other one said, I don't know, I've only met him three times. And he used to -- that one brought the house down.

An old joke, often repeated. At least John McCain was funny to some people--but CNN has a similar schtick, and no one finds them funny at all.

SUNUNU: Yes, that's -- John had about five jokes that he loved to repeat.

SUNUNU: And, in fact, let you know he was going to repeat them. So he used them well and it got to a point where the audience felt deprived if he didn't tell the same joke the next time they saw him that he had said the previous time.

CAMEROTA: No, I totally agree, they didn't get old. I agree, having heard them many times. He delivered them with the same verve and novelty each time.

Here's something else about John McCain which I had not know, which made him somewhat more endearing, at least as a Presidential candidate. For the record, I did vote for him in the 2008 General Election, even though I had supported Mitt Romney in the June primary.

SUNUNU: Yes. And, you know, he had an interesting take on the town halls. He almost felt that he was deprived if somebody didn't ask him a tough challenging question. Not somebody that he felt was trying to provoke him, but somebody that was trying to really find something out about an issue and he loved taking that opportunity to explain the details of something that was important.

Too bad that McCain didn't govern with the same kind of personable panache for Arizona in Washington DC.

The person that knew him best up in New Hampshire, of course, is Senator Ayotte. John McCain embraced Senator Ayotte when she got elected. He kind of brought her in as part of the three amigos with Senator Lindsey Nelson and himself. And he worked with her on the committees and tried to make sure that she really was treated in a way that allowed her to grow in the Senate. And he -- she really, I think, became his closest New Hampshire ally.

CAMEROTA: So, governor, what do you think about President Trump rejecting the practice of putting out an official White House statement about John McCain's service and sacrifice?

Here we go. At this part, the interview got tense but very engaging for us conservatives who are tired of CNN (Clinton News Network) repeatedly attacking our President.

SUNUNU: Look, that was printed in "The Washington Post," and I have to be honest with you, I don't give much credence to what I read.

CAMEROTA: We also have that reporting.

BAM! I loved this. This transcript won't convey the shocked look on Camerota's face. I saw something vaguely similar when I told her that CNN's ratings were in the tank. People don't want to watch non-stop anti-Trump mania, especially when it's deliberately misleading and clearly false.

I ... I ... I. Hey, Alisyn. This interview is about John McCain, right? It's not supposed to be about you. Do you understand?

SUNUNU: I'm saying that I don't want to comment on a report that I haven't satisfied myself is correct.

CAMEROTA: And if that report were true?

SUNUNU: I'm not going to answer the hypothetical.

Good for you, John Sununu!

CAMEROTA: It's not hypothetical. This is our reporting. We have rock solid sources in the White House that there was a statement that drafted --

Wow! She doubles down on the network's shameless duplicity, but Sununu isn't having any of that.

He handles this conflict with such diplomatic tact and flair, something that Chris Cuomo, Brian Stetler, and the other hack "journalists" (in reality, propagandists)

CAMEROTA: It's not the press's handling. It's President Trump's handling of John McCain's death.

LIE! Wow, this desperate need to cover up for the media bias, the desperation to justify their lies, their anti-Trump madness is just stunning to me.

SUNUNU: OK. Look, John McCain was a great American who deserves to be recognized as a great American. He is being recognized by his colleagues and of friends -- his friends around. Melania Trump has certainly put out an exceptionally strong statement outlining the appreciation for his service. The White House has recognized the sorrow of the family. And I think Americans ought to be looking at the positive side, not trying to create a division amongst people who are in joint sorrow mourning a great American.

CAMEROTA: And are you satisfied that President Trump's statement goes far enough?

SUNUNU: I suspect there will be additional statements over time and I think this effort to try and create a cleavage there really does disturb me. It is, in fact, this kind of -- it is, in fact --

Then Camerota gets really offended. The video conveys her sense of wounded pride. "This effort to try and create a cleavage ..." Yes, the former Governor of New Hampshire directly calls out the unprincipled bias of Clinton News Network.

CAMEROTA: Sorry, can you repeat that? Sorry, somebody was talking to me. This effort to what?

"Someone was talking to me." Wow! Talk about unprofessional. Can one assume that Camerota wasn't listening in the first place? She was expecting a sharp exchange or long sequence of abusive rants against Trump.

SUNUNU: Cleavage between the White House and the -- and those that are mourning John McCain. It is this effort by the press to accentuate the negative that I think has created the climate that prevents, in the long term, the bipartisanship that John McCain supported. And I don't want to be a part of rubbing whatever salt there is in whatever wound there may be because I think that just adds to the division. 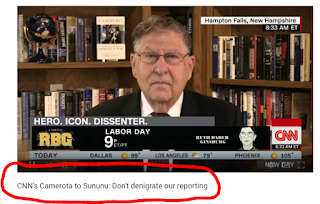 It's stunning how the Governor kept effortlessly returning the discussion back to McCain. He took Camerota's brazen attempts to push a shameless political narrative and returned it to a more meaningful end.

[08:40:19] I'm here because I lost a good friend. I wanted to express my concern about that. I wanted to applaud what he contributed to the country. I wanted to underscore the relationship he had with the state of New Hampshire. And I'm not here to play the political games that some of the press want to play at this moment of what I think is great sorrow for the country.

CAMEROTA: Just to be clear, we don't see it as a game. And to be clear, the press didn't create whatever division exists that President Trump feels that allowed him to spike the statement that General John Kelly wanted him to put out about John McCain's sacrifice. The press didn't invent that.

Yes, they did, or at the very least they fanned this unrest.

I do not think McCain was a great hero at all. I despised the man. Yet Governor Sununu has a right to mourn the loss of his dear friend. He has a right to reminisce about the good times he shared with McCain, too.

She just had to try one more time to bring in Trump. Sununu knew how to keep fighting it.

BINGO! That word "exploit" was the perfect word. I am so glad that the Governor called her out like that. It was just perfect.

CAMEROTA: Governor, again, we don't have to try to exploit something. This is a fact. This is a truism, that the --

SUNUNU: Well, why are you dwelling on it?

CAMEROTA: And I would --

SUNUNU: I have given you my comments on it and I am here to talk about John McCain.

CAMEROTA: Fair. And I just reject your premise that this is something the press has created. It has been customary, probably since George Washington was president, to honor a war hero.

Here we go again. Camerota makes the discussion about her and the media all over again. This is so shameful, this is so unbelievably in bad taste. These shameful media frauds have no regard for anyone but themselves.

CAMEROTA: Governor John Sununu, we appreciate you coming on and giving us your thoughts about what John McCain meant to you and to New Hampshire.

Thank you very much.

SUNUNU: It's a great loss for the country and for the world.

Alisyn Camerota ran into the Sununu buzz-saw. He took her down like a boss, he rightly shamed her for making the whole interview about Trump instead of John McCain. Sununu calmly rebuked Camerota, forced her to return to the subject of the deceased US Senator, and even when she insisted on taking jabs at President Trump, Sununu rightly rebuked her and the press as a whole.