Here is the entire video of us Trump supporters at Cal State Fullerton fighting for free speech and defending President Trump.

This was the most successful free speech event I have ever attended.

In spite of the brief yet violent burst of violence at the beginning--when this crazy black lady attacked my friend Genevieve--it was a relatively peaceful event.

The widespread police presence on the campus was incredible. I saw at least 50 police officers, many from the University of California system as well as the Cal State system. At the outset, all of us believed that we would be safe and sound.

Shortly after Genevieve got punched and hit in the face multiple times, however, it was clear that they were going to focus on keeping the mass violence down to a bare minimum, without any interest in stopping hand-to-hand combat from left-wing assailants. 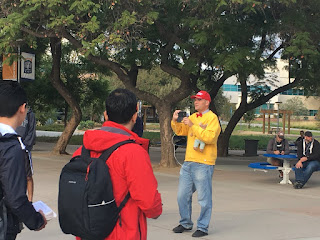 I also notice a scattering number of protesters on campus who were wearing masks--still. I think it's time for local law enforcement to deputize law-abiding citizens to arrest people who wear masks in these public spaces, especially on college campuses with large protesting crowds.

How can I neglect to mention who joined us at the Fullerton event?

Gary Gileno was there with his wife.

Genevieve Peters, of course, along with Alex Khalil, who met me in Torrance to ride with Genevieve and me to the event.

Harim Uzziel with Elsa Aldaguer came together, and then Jeremy Patino and John Willis came, too.

Jeremy was a key component of our team, since he had my back the whole time! This guy knew what needed to be done in order to keep my safe and sound, and to allow me to speak to different members of the crowd.

Some people came up to me as soon as we approached the plaza outside of the auditorium with Milo's speech. One guy asked me which was worse, feminism or cancer. I said "both". It was crazy how within minutes people came up to me to talk about what I was doing there and what I wanted to see and do.

1. Stand for free speech.
2. Support my President Donald Trump
3. Find out what college students are thinking, whether they like or hate Trump, and why
4. Change minds about Trump, about conservatism, about Republicanism, free markets, free enterprise, etc.

Indeed, this was a successful event. 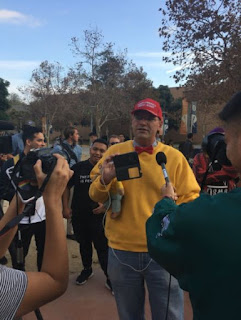 1. The young, thin Brown Supremacist was there, and she tried to get in my face and shame me publicly. I really took her down like a boss, shutting down her every argument against me. Indeed, this is my job, and I receive donations from readers and followers like you and other people who are fighting for truth, justice, and the American Way--MAGA! She was absolutely speechless when I flipped her script on my mentioning Rosa Parks at the Huntington Park City Council meeting on June 6th, 2017.

When she tried to shame me about what I am doing for my community (I prefer the term "communities", since there are so many people doing so much good and want this country to succeed), I told everyone that I had donated my car to help veterans. Everyone applauded.

2. The Cuck Heifer--once called Based Spartan Man, but now revealed to be one more cashing-in, sellout leftist--showed up to cause trouble. John Willis confronted him and mocked him with abandon, as did I.

About fifteen minutes later, I started discussing the Second Amendment with one young man, then Cuck Heifer showed up, blocking me from speaking to the student. I refused to be bullied, or to allow that young man to be ignored and shut down. 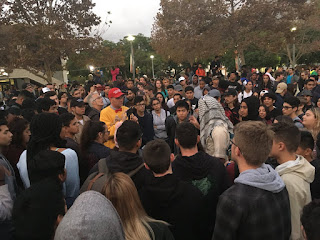 After about two minutes, Cuck got upset and hit my camera. I told him he was done, and Jeremy right behind led me out of the first crowd, yet I continued to reach out to the young man so that I could discuss the gun control issue with him. It was awesome!

Cuck got cucked, he ended up looking really bad in front of college students--whom he was trying to shut down--and the best part? The young students go to see that I was one more person there who wanted to listen to THEM!

It was a huge success all around, too, because other conservative students crowded around the Cuck Heifer and pushed him away. Other students joined with me and we continued our discussions on a number of issues, including Islam, free speech, Black Lives Matter, the police, and so on.

Jeremy Patino did an incredible job diffusing the situation and making sure that other students could speak without incident.

3. Another young man disparaged the legacy of Republican President Abraham Lincoln. This student was really interesting, because earlier that day he had called me a baby and walked away.

It was incredible how successful this whole event was.

Did I see three favorite? I actually have another, and there are many more great moments, too, but it's better just to watch the video!

4. A group of black college students were standing around and listening to me. One of them got very emotional at first, and some of his friends held him back to calm him down, but everything worked out. The other black students behind me noticed one Antifa member off to the side who was trying to silence the discussion or distract us from talking to one another. Eventually, this Antifa, with a black helmet and facial mask, upset the black students. They ended up shouting her down and chasing her off! 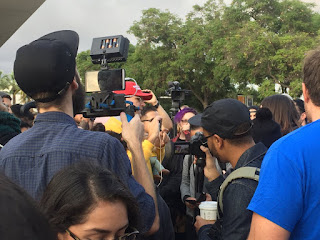 Once again, this was the most successful pro free speech event, convocation, rally that I had ever attended.

The violence was kept to a minimum for me because I stayed close to fellow Trump supporters. The students were open-minded and willing to listen. Did we agree? Not that much, but they started to hear a different point of view, and someone who was not afraid to challenge their accepted orthodoxies and mythologies about Trump, politics, faith, and economics.

We are rocked that event! It was AWESOME!
Posted by Arthur Christopher Schaper at 12:36 PM