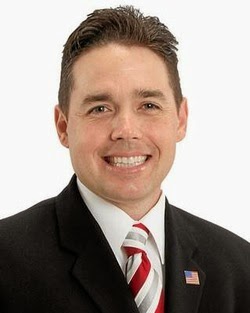 Shortly after the hard-fought, yet oh-so-close race in Congressional District 31 (the Miller Seat), I reached out to Republican candidate Paul Chabot.

He was within striking distance of winning this seat, yet he lost, and despite the growing poll trends which positioned him to win the seat,

First, I asked him about Tim Donnelly's piece "The GOP Wave crashes in California.

I asked him his thoughts about Donnelly's take, including all the missed opportunities.

I think he really nailed it on the head in regards to California Congressional races, there were so many that came up just short, including Gorell's. I don't want to throw him under the bus.

Where there's smoke, there's fire. Democrats were spending heavy on this race.

Imagine that. A purportedly safe Democratic seat was targeted by the Democrats in a year when there were putting out fires all over the country, yet got burned nonetheless.

Democrats had a plan from day one to slander me with Latinos and Women. By scaring them about things that were completely untrue. There was not enough to tell them that was not the case.

We expected that the NRCC would level the playing field. That never happened.

I truly believe that they thought this seat was completely unwinnable after Gary Miller retired. They turned their back on the 31st. If Gary Miller is not running, it's a D +5 seat, who's going to win it. An unknown running. We could not get much traction.

He then mentioned that high-profile Republicans did help him out, including House Majority Leader Kevin McCarthy and former UN Ambassador John Bolton, who did robocalls for the Chabot campaign. Retiring Congressman Gary Miller also endorsed Chabot (even though he had supported another candidate in the primary). Still, his refrain returned to the NRCC:

We needed the NRCC to enter this race to level playing.

Was there any reason for them to rethink their decision, I asked.

The NRCC never polled in this race. We did., They never believed our pol. At the end , a week and a half before the general. It showed us winning 8% among high propensity voters. We win with those whom we can communicate with. We really need the party to help communicate. We ended up losing  - we could not communicate at the same level that the Democrats were communicating.

What about endorsements in the local press?

No. One local paper had a split vote -- they endorsed Peter because of elected office. We genuinely felt that with all that aside, we believed that we were going to win. We were knocking on doors non-stop.

The biggest learned here -- if you don't have an equalizer to balance the playing field. No matter how strong your ground game is, you need a match in air cover. Gary Miller was frustrated with the national congressional committee. I am critical of the Young Guns program. I could not get on the list.

One of the key requirements was that a campaign had to have $250, 000 cash on hand, which Chabot would have needed in the first place to get his message out.

I then asked him his thoughts about CA GOP Chairman Jim Brulte:

I think Brulte is doing the best job that he can. The problem which Brulte and every. There is no state resources to support the candidate. Top-down funding is outside the hands of the state party chairman. The NRCC funded three races with Young Gun status: Carl DeMaio, Brian Nestande, and Jeff Gorell.

If Chabot had received a fraction of the funding which went to DeMaio's campaign, he could have won the election.

A third time, Chabot explained who the National Committee's assessment of key races an make or break a candidate's chances:

There are two different schools of thought. We don't hold the purse strings. Beltway has their own way of looking at things. Once they believe a race is not winnable, it spreads like wildfire. When you are not on the Young Guns program they won't support you.

They looked at the registration, when they should be looking at the polling, in other words

For Young Gun status, there has to be an on the ground evaluation of the team, of the outreach of what the candidates are doing. You need to have a phenomenal ground game and air coverage. They can do the direct mail. In other words, the NRCC is taking a test. You have to look at the whole students. You can't just look . They can't depend on the Beltway. The wave really crashed hard in California. Our polling showed that this area was a blue-dog Democrat region.

In other words, even though the registration was majority Democratic, and previous elections had gone to Democratic candidates state and federal, there was no reason to write off the district right away.

Chabot added that other big name money interests got involved:

Bloomberg entered this race against me because I am an NRA member. These levels of attacks. DCCC. No equalizer to those responses. The NRA did come in with postcards, but that is a drop in the bucket compared to the millions of dollars spent on this race.

We see a clear path to victory in 2016. We need the donors to enter this race. All we have to do is neutralize that, and we beat our opponent hands down.

Chabot's political supporters worked their butts off to win, and they pulled off a near-upset. The strict campaign tests imposed by the NRCC are too steep, need to be revised. National Republicans are likely still burned by the nearly $200 million investment in California, when they tried to capture the US Senate and governor's seats in 2010, which did not pay off. Four years later, and the Democratic brand is as tarnished as ever.

Big money donors may feel that investing in majority Dem seats is an automatic throw-away, and they want something concrete to justify the spending. A week before the election, Chabot polled eight points ahead of his Democratic opponent among high propensity voters. Imagine what more funding and stronger messaging could have done to counteract the negative press.

Chabot brought up another element of the California political landscape. Too often, Beltway strategists have painted California with a broad, blue brush, assuming that the whole state is a subsidiary of San Francisco or liberal West Los Angeles. Such thinking is mislead. The Inland Empire, and even into San Diego and Orange County, still carries a strong, conservative heartbeat.