This weekend, I am visiting my father and his wife Patty in Albany, Oregon.

It's amazing to me how quickly the city has developed.

People are moving into Linn County so quickly. New restaurants are popping up all over the city. The roads are getting busier and the traffic tighter, too.

Of course, this is December 22, three days before Christmas, so lots of people are hitting the streets, overrunning the stores, getting everything ready for the big holiday. Still, my Dad has been telling me how the city is witnessing a massive growth in housing and business development.

In the midst of late morning traffic to Albany, I saw this truck driving down the 99E corridor: 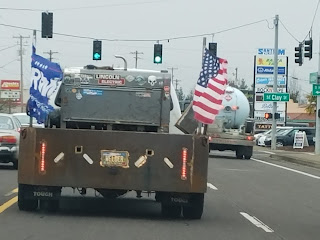 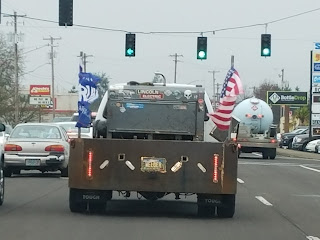 These are welcome signs, to be sure.

Oregon is not exactly Trump territory. The state has gone Democratic in Presidential elections since 1988, when even Bush senior riding President Reagan's victory coattails was not enough to catapult him to any victory in the Beaver State.

The big problem with Oregon is that the three major cities along the Interstate 5 corridor--Medford, Salem, and Portland (one could also add Eugene)--are heavily Democratic, liberal cities. Their voter turnout flips the entire state, even though much of the state is rural, farm country, and very conservative. The same problem dominates California, New York, and Illinois. But for the large, corrupt, Democratic-run urban centers, they would be red states.

As of this writing, Oregon is on track to gain another House seat because of population growth in line with the next decennial census. Has the population growth provided more Republicans, Democrats, Independents? Will people work to elect better governance at the state level?

Time will tell, but at least I can rest assured that there are more Trump supporters out and about in Oregon willing to show their presidential pride!
Posted by Arthur Christopher Schaper at 4:44 PM