Yes, we all heard about the big protests that were going to overwhelm major cities throughout the country on November 4th, 2017.

Antifa and RefuseFascism.org were ready to work overtime to make sure that they scared everyone off and took down the Trump/Pence regime. Funny. 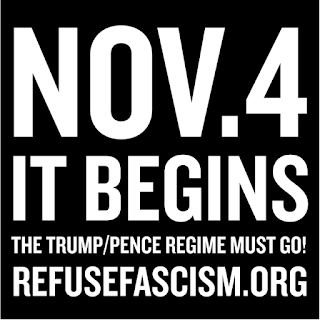 I got all kinds of messages and recriminations about this Saturday.

People were warning me that all kinds of terrible things were going to happen. There would be rioting in the streets, for example. Some people shared deep concerns with me, that my health or my life would be in danger.

I had a sense within me that nothing big was going to happen, at least nothing dangerous.

And I was right!

Our main man Antonio Foreman, who has taken on Antifa and survived vicious stab wounds, organized everything. He connected with the sergeant in charges of these events. We figured out where we would stand and protest.

The Los Angeles Police Department did not disappoint!

We all met at a good location, a parking lot near enough for us to march and display pride for country and our President.

It was crazy how I had hoped to get there on time, but I was late to the parking lot. The whole team was willing to wait for me. I was really honored and touched.

Foreman did an incredible job arranging everything.

Check out the first leg of preparations for the event:

Antonio worked with some members of the Proud Boys to ensure that we all coordinated our movements and communications together. We needed to stay together, cross together, and watch each other's backs. They even had a specific place for me to march along with everyone else.

This is a new movement altogether, and it's called "United Patriot National Front".

We had undercover, plainclothes police walking with us along with officers in uniform. First, we marched through Spring Street and other Downtown streets to get to Pershing Square. When we arrived at the key corner, we found a middling to poorly attended Antifa/Refuse Fascism crowd.

"That's all?!" many of us Trump supporters asked.

[Update: Even though YouTube took down the initial video, we have fixed it so that the video has been uploaded to another channel. Major Kudos to the Based Krusader for re-uploading my content!]


That was it. The momentum to get rid of Trump and Pence with these loud yet useless rallies has begun to take its toll on the left-wing activists. There is only so much strength left to resist if the President and his supporters keep winning. Even bad Republicans are getting pushed out, and they will more likely than not be replaced with conservative populists in sync with the President and with our agenda for this country.

We had at least 100 Trump supporters on the corner of Pershing Square with us. Young people, and men and women of all backgrounds joined us. Some Trump supporters who were just passing by decided to join our cause. In spite of the menacing threats from Antifa types, who claimed that they would enter into our demonstrations undercover, nothing happened.

There were three altercations, with two anti-Trumpers either swinging their fists at us while passing behind our protest, or charging into our group to attack us. It was pretty sad, the attempts by these leftists to shame us or slam us into silence.

The best part for me? We marched through the streets of Downtown Los Angeles, waving our flags and proclaiming our love for President Trump and his MAGA Agenda. We saw new faces, people of all colors and creeds walking and celebrating with us. The toughest part for the party organizers, of course, was keeping us in line. So many of us wanted to rush into the sidewalks and confront the silly liberal lunacy of our detractors. However, there was nothing that the left-wing Los Angeles losers could do about it. 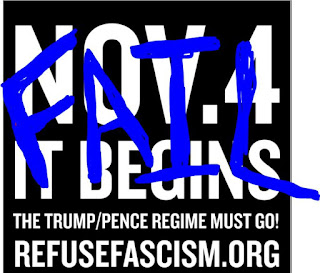 Looking back on it now, I can;t think of the last time that Republicans at any time had walked in a parade to celebrate their President! These are exciting times, indeed!
Posted by Arthur Christopher Schaper at 10:04 PM