The NFL Will Feel This On Veterans Day!

A National total boycott of the NFL is planned for Sunday, November 12th, Veterans Day Weekend.

Boycott all football telecasts.  All fans, all ticket holders, are asked to stay away from attending or viewing any NFL games on Sunday, November 12th; let the NFL play to empty stadiums.

Pass this post along to all your friends and family. Honor our military, some of whom came home with the American Flag draped over their coffin.. Continue with the weekly boycott of televised games, but let’s make this a day the owners, coaches, players, and advertisers will notice.

They have a right to protest if they want to, but during the National Anthem is NOT the time or venue!  They  show an utter lack of patriotism and total disrespect for our Veterans – living and dead – and everything for which they put their lives on the line.

If you agree, please help this message go viral 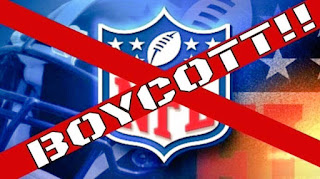 Here's a great statement from a Torrance, CA residents, fed up with the arrogant NFL association has become.

Every game day is boycott day for me. Last season I watched no NFL games. This season I still have that string intact. I only watched the last 6 six minutes of the Super Bowl this year because it looked like Bill Belichick would lose another one. I didn't need to watch OT because it was obvious if Atlanta could blow such a big lead late in the 4th quarter they wouldn't do any better in OT.

A few days ago I got my NFL sweat shirt. No Fans Left. I left 16 months ago and I may never be back. I don't need to watch a bunch of kneeling felons. Lat year the Cowboys wanted to wear a patch honoring the 5 police officers that were killed and the commissioner said NO. On 9/11/16 a team wanted to wear cleats to honor those who died and the commissioner said NO. Not so long ago we found out that our military had paid the NFL $6-7 million for their sows commemorating our troops. Shouldn't the NFL do that at no charge?

But then when Colon Klaperdick started kneeling and wearing socks depicting cops as pigs the commissioner said nothing. About a month ago the owner of the Cowboys said the players need to stand because it was a matter of patriotism? Really? He didn't say anything when the dimwit from the 49ers started this. He didn't say anything when the kneeling spread to more players. I think he spoke out because he heard the fans booing, saw fans burning their season tickets. fans burning their memorabilia, TV viewership down over 18% since 2015, lots of empty seats at stadiums and we don't know what has happened to the sale of NFL crap since  the league won't release those numbers.

Papa Johns is a sponsor of the NFL and when their sales under performed for the 3rd. quarter of 2017 the company blamed it on fans boycotting the NFL and the Papa John's sponsorship. In conclusion Jerry Jones saw the light when he looked at his bottom line and not because he got a patriotic epiphany. We don't need the NFL but the NFL needs us. Holding middle finger down and asking the commissioner:

"Do you hear me now or do I need to turn it up"?
Posted by Arthur Christopher Schaper at 9:28 AM

Email ThisBlogThis!Share to TwitterShare to FacebookShare to Pinterest
Labels: boycott, Boycott the NFL, No Fans Left, respect our country, spoiled athletes, Stand for the Pledge, Take a Knee