+Crime increases at gas stations.
+Crime increases at convenience stores.
+Crime especially increases at gas station / convenience store combos.
+Homes within 300' will be uninsurable by the government.
+Homes within 100' will be exposed to carcinogens, VOCs and particulates. Many cities recommend 300' distance from homes to gas stations.
+There will be more congestion at these intersections.
+The fuel trucks will make an awkward left turn from Carson onto Andreo blocking all lanes and then a quick right into the station while part of it continues to hang into Carson Street.
+Several car manufacturers will no longer be making gasoline cars in the next few years, so this is not a forward thinking project.
+This area is already at its recommended limit for alcohol licenses.
+This alcohol licence will be right next to ALANON, several recovery homes and schools.
+There will be considerable light pollution.
+There will be considerable noise pollution.
+There will be added air pollution from the pumping of gas, the idling of cars, the starting and stopping of cars, etc.
+The building style does not fit the style of the neighborhood.
+9 beautiful palm trees will be removed.
+There are 9 gas stations in under one mile
+They are merging five lots to do this project.
+Gas stations are not the future. The municipal code asks us to look at the future.
+Tanks always leak into the ground water. Removal of tanks in the future costs millions of dollars.
+There are very few breaks in the traffic per hour to allow hundreds of cars to make a left hand turn as they exit the station area from Gramercy or Andreo. 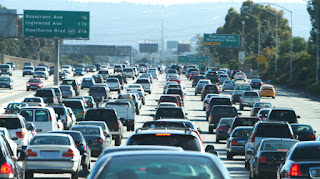 These are just a few of the reasons to protest. You may not care about all of them, but remember, we have a PLANNING Commission. It's for planning. The best cities are well planned. The city does not have to approve this. It is within their legal standing to deny the CUP (as the city attorney confirmed with us). Let's put some great businesses on this property! Businesses that are not redundant, but would benefit the city and it's residents. Hope to see you on November 14 at 7.
Posted by Arthur Christopher Schaper at 7:57 PM