Andrew Sullivan not only tapped into the worldwide outrage against mass migration and illegal immigration--an issue which the center-left just doesn't get--but he also called out the center-left's militant opposition to freedom of speech. 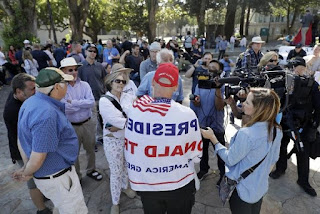 What is the matter with these people?

This is no idle problem, however. The Democratic US Senate caucus tried to pass an amendment essentially gutting the First Amendment shortly before the November 2014 Election day. Not smart. Freedom of speech is a non-partisan, bipartisan, and also fully American issue.

Too many people value the freedom to speak their minds and do so without fear of reprisal or repression.

Yet the Democratic Party in the United States wants to shut down the First Amendment. Of course they do! They can't win by shaming opponents into silence, so they need to criminalize the free exercise and exchange of ideas.

Here are the full array of concerns shared by Andrew Sullivan in his article: Andrew Sullivan: The Issue That Could Lose the Next Electionfor Democrats:

For me, as regular readers know, few things seem as ominous as the fate of free speech in the West. In democratic countries without a First Amendment, writers and speakers are now routinely hauled into court for hurting someone’s feelings or violating some new PC edict.

This is truly terrible. This assault on freedom of speech has become endemic in Canada, where it is a crime to refer to someone with the wrong pronoun. The same perverse nullity has been enacted in California in nursing homes.

In Britain, meanwhile, it is now a criminal offense to post something on social media that “is perceived by the victim or any other person, to be motivated by hostility or prejudice.” “Hostility” is defined thus: “ill-will, spite, contempt, prejudice, unfriendliness, antagonism, resentment and dislike.” In other words, if you “dislike” some idea, and someone else asserts your view is driven by “unfriendliness” to a member of a minority, you are breaking the law.

This is outrageous. This is creeping Sharia at its worst, and it's time for Britons, the men and women who championed the legacy of Magna Carta to step up and push back against this sublte, "democratic" tyranny.

In America, thanks to Thomas Jefferson et al., such policing of minds and thoughts by the government is forbidden. 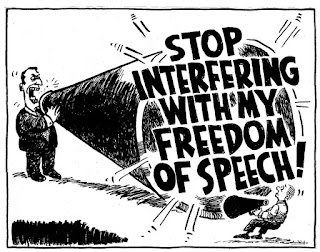 This paragraph then launches into a broadside against the loony left and the "reactionary right." President Trump has slammed the press for writing lies about him. He has joked about locking up bad reporters, for example. One lawmaker in Indiana toyed with the idea of requiring reports to register with the state in order to report on goings-on in the state capital.

But the real attack on free speech comes from the left. Simple as that.

This slow-rolling censorship has laid siege to book reviews, too.

I will reprint the entire passage and exchange for your viewing, because this story is truly incredible. I cannot believe that publishing firms and print are getting clobbered by this political correct

Many now demand, for example, that young-adult fiction conform to their ideology … or they will destroy a book before it is even published and before they have even read it. That just happened to a book written by Laura Moriarty, called American Heart, which was subjected to a social-media version of book-burning. Kirkus originally gave the book a glowing review, and then retracted it under pressure, then got the reviewer to rewrite it. Vulture interviewed the editor of Kirkus Reviews about the flap. Money quote:

“Obviously we don’t like having to make corrections after the publication of a review,” [Kirkus’s editor-in-chief Claiborne Smith] adds. “The plan is to beef up our editing of reviews in this section, to have further eyes before it goes to print.”

In the future, I ask, is the goal that no problematic book will escape un-called-out?

This is insane! I do not want to silence points of view that I do not agree with. There is no way to gain people's trust or agreement by silencing them. That is insane! This is evil stuff, people. We have this stealthy dictatorship overwhelming us, and we should not just sit by and let it happen.

Or look at what happened to a speaker from the ACLU at the College of William & Mary in Virginia a couple of weeks back. She came to give a talk about — yes! — free speech, only to be shouted down by the usual mob, who were at least honest enough to chant: “Liberalism Is White Supremacy,” and “The Revolution Will Not Uphold Your Constitution.” They physically prevented the speaker from even talking one-on-one with those who were interested in a dialogue. 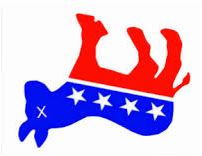 This "heckler's veto" must be punished by fines and jail time. There is no excuse for preventing people from speaking, from being heard in a private or public setting. If men and women do not want to hear a speech or a fair exchange of ideas, then they can take up track and run away.

Freedom of speech is an essential vehicle for Making America Great Again and for ensuring a free and thriving society. If we allow the government or well-connected private individuals and persons to silence us, we are embracing tyranny and the slow road to serfdom. We cannot allow that to happen.

Let us do everything in our power to ensure that every person has the right to speak, to be heard, and for those who do not want to listen, that they can enjoy the freedom not to hear. The Democratic Party is on a crash-course for failure if they continue to destroy the fundamental rights of American citizens.

No more!
Posted by Arthur Christopher Schaper at 2:33 PM