Check out one of my videos in Orange County from yesterday.

The Indivisible movement is working overtime, targeting every Republican district they can in California. Hillary Clinton won the majority vote in about 6 districts, but the Democrats have expanded their map to about ten of the 14 Republican house reps in the state.

This little outing at the VA Clinic in Laguna Beach was funny.

Where was everybody? They had a grant total of six people, including their featured speaker, a doctor in emergency medicine.

It looks like this left-wing movement is hitting some dry spots, running out of steam, if you will.

They are committed to pushing for socialized medicine of any kind, whether holding onto Obamacare, pushing Medicare for all, or demanding single-payer.

These programs are a total disaster, and I tried to discuss my concerns about these programs with the members of this "Health Care Voter" group.

Check out their responses in the video.

After the "event", for what it was worth, a veteran showed up, who attends a meeting at the clinic. 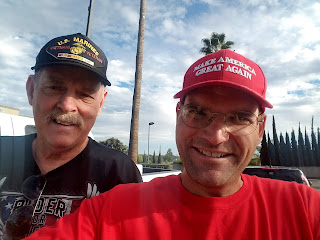 He outlined for me the many problems with socialized medicine. He hates the VA, and he told me that he would rather have choices and go to any hospital he wants. The Veterans Administration is a perfect example of government-run single-payer health care.

And it sucks. Why don't these Indivisible left-wing activists care what veterans think?